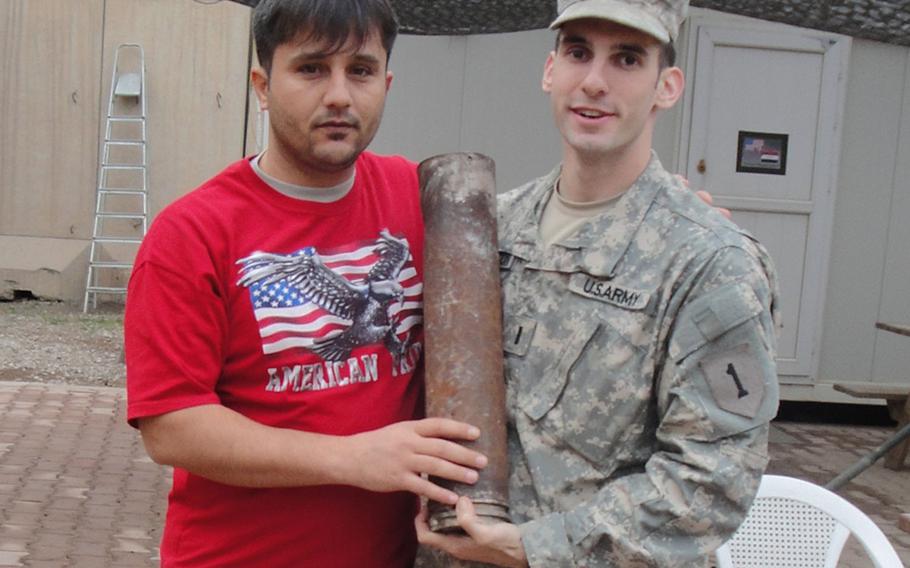 Baran "Rainman," a former Iraqi linguist, and the man who sponsored him for a Special Immigrant Visa - then 1st Lt. David Henderson, a psychological operations officer attached to the 2nd Brigade Combat Team, 3rd Infantry Division - hold an expended artillery round that landed near their forward operating base during a 2009 deployment to Forward Operating Base Marez in Mosul, Iraq. (U.S. Army)

More than 9,000 war zone interpreters waiting for answers on their visas could start receiving decisions soon as part of a plan proposed by the State Department in federal court.

The plan filed Thursday comes in response to a class action lawsuit and aims to fix delays – some lasting years – in the Special Immigrant Visa program that allows interpreters from Afghanistan and Iraq to resettle in the U.S.

The State Department agreed to follow timelines for processing applications for interpreters detailed in a 2018 class action lawsuit, which argued that almost no applicants get their results within the congressionally mandated nine-month response time.

Lawyers for the refugee advocacy group that filed the lawsuit were involved in crafting the government’s new plan, which both parties anticipate will be approved by a federal judge, Thursday’s filing said.

“Through this plan, we’re hopeful that the people stuck at various parts of this process will actually see movement in their cases,” Deepa Alagesan, an attorney for International Refugee Assistance Project, said Friday in a phone interview.

Due to the COVID-19 pandemic, there may be initial delays because of the suspension of most routine visa services, lawyers representing the government said in Thursday’s filing.

Thursday’s plan is the government’s second proposal after a federal judge rejected an earlier version in March that proposed new deadlines for applicants and recommended closing out long-stalled applications.

The filing is encouraging, even though it does not cover all war-zone interpreters, a board member for another advocacy group said.

“This plan is a positive step towards addressing one of the two major deficiencies in SIV programs: unfair and inequitable administrative delays inconsistent with Congress’ intent of processing timelines,” said James Miervaldis, board member for No One Left Behind.