A variety of uniforms and gear, some resembling U.S. military uniform items, are displayed for sale at the Bush Bazaar in Kabul, Afghanistan, on Thursday, May 31, 2018, despite years of police crackdowns on the sale of uniform items that could be used to deceive security forces during attacks on government facilities or civilians. Chad Garland/Stars and Stripes (Chad Garland/Stars and Stripes) 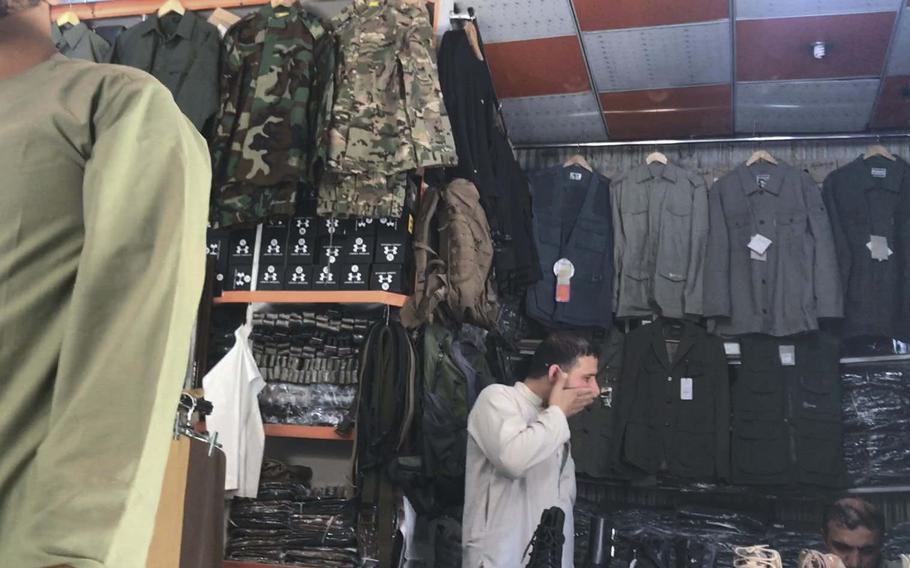 KABUL, Afghanistan — Outfits that look the same as the U.S. Army-style combat uniform worn by a gunman in an attack last week on Afghanistan’s Interior Ministry can easily be found for sale in the capital.

At the Kabul market known as “Bush Bazaar,” shops sell military goods of suspect origins — everything from what U.S. troops wear on their backs to what they put in their bellies, and more. The mall, which brings together hundreds of vendors, is named for the former U.S. president who ordered the 2001 invasion, which brought in thousands of troops and the supplies to support them.

Most of a convincing counterfeit Army uniform can be had there for about $60 or less. Some of the uniforms and accessories seem genuine or are very good knockoffs.

Not long ago it was common for attackers to don friendly military disguises, but Wednesday’s attack marked the first such assault in more than a year, said Gen. John Nicholson, commander of U.S. and allied forces in the country.

After a run of such attacks in 2012, including a deadly September assault on Helmand province’s Camp Bastion that left two Marines dead and eight fighter jets damaged or destroyed, Kabul police began cracking down on the unauthorized sale of military and police uniforms.

As far as the police were concerned last week, those efforts had been effective.

“Selling uniforms is not allowed,” police spokesman Hashmat Stanekzai told Stars and Stripes. “If someone is caught with selling those items, he gets jailed and the shop is shuttered.”

They might be sold in secret, he said, but not openly, as it’s “strictly banned.”

Yet shopkeepers displayed plenty of military-style clothing for sale, and on a recent visit boasted that some items were the same as those worn by the country’s commandos, the elite troops who work closely with American special operations forces and often conduct night raids against insurgents and terrorist groups.

Some Afghan forces and other coalition troops wear uniforms based on or difficult to distinguish from current or past U.S. uniforms.

When asked, some merchants claimed they sold uniforms only to military or security personnel, though they showed no reservations about offering military clothing to civilians before the question was raised.

Many styles to choose from Even if not worn to military standards, garb that passably disguises the enemy as friendly forces could cause confusion in an attack or create a few moments of hesitation, allowing a suicide bomber to get closer to military bases or patrols and inflict heavier damage.

That pattern of uniform was harder to find at the bazaar and cost about one-third more than what appeared to be brand-new military outfits resembling those currently worn by the Army and recently adopted by the Air Force.

Priced at about $30 and found in several shops, not all those in the newer print known as Operational Camouflage Pattern seemed authentic. But without a close inspection, it was sometimes hard to tell.

It took about 30 minutes of shopping to find a used set of the older style uniforms, hidden in the stocks of a shop run by an 18-year-old and an 11-year-old. Nothing more than the right amount of cash — $35, haggled down from $42 — was required for the purchase. Twenty dollars more bought a pair of tan combat boots that were likely not military issue, but they were a close approximation.

Some shops offered Afghan military patches and officer rank insignia, but U.S. Army combat patches like those worn by Wednesday’s attackers seemed impossible to find. But patches of any type could easily be custom-made nearby, locals said.

A few stores carried camouflage hook-and-loop tapes embossed with “U.S. Army” or names such as Moran and Wessling, which would complete the look.

Tactical vests were displayed on mannequin torsos, and several hangers held even older-style uniforms from the early 2000s or those resembling U.S. Marine uniforms, as well as military backpacks, T-shirts emblazoned with the word “Army” and the occasional flight suit.

Ill-gotten gains? In addition to stores selling gear, grocers sold Meals, Ready to Eat — even pork varieties forbidden under Islam — and cases of nearly every type of drink found in military dining facility coolers, including Rip It. Shopkeepers said they got them in Bagram, home of the largest U.S. base in Afghanistan.

Many of the goods may have been pilfered from military supply shipments. Resolute Support officials could not immediately say how much of its shipments are stolen or lost each year, though six years ago the rate was 1 percent, or nearly 800 truckloads. American soldiers have also been caught ordering extra supplies to sell them at off-base markets in the past.

As for military clothing, troops are taught to dispose of it in special bins on bases like Bagram Air Field, or to destroy uniform items to keep them from falling into enemy hands.

It’s not clear which of the anti-government groups in the country carried out the Interior Ministry attack. The Islamic State claimed responsibility and later released a photo of its 10 purported attackers, but U.S. officials said Monday that the Afghan-led investigation still indicates it was the work of the Taliban’s sophisticated Haqqani network.

The Taliban, however, have not claimed responsibility, and spokesman Zabiullah Mujahid declined to discuss it Saturday. He said he could not reveal much of the group’s current tactics but claimed it had plenty of military uniforms — some “very easily” obtained in markets, but many more taken after militants had overrun government buildings and raided stores of weapons, ammunition, vehicles and other supplies.

“That’s what makes us very rich when it comes to military uniforms,” Mujahid said. “We don’t use them much, so we have plenty.”

Stanekzai, the Kabul police spokesman, blamed Afghanistan’s neighbors for sponsoring the militants, a common refrain among Afghan officials. Pakistan has long been accused of supporting the Taliban and officials increasingly allege Russian and Iranian backing.

“When the insurgents can get weapons, training and full support in neighboring countries, they can also get military uniforms made there,” he said.

Stars and Stripes reporter J.P. Lawrence and Zubair Babakarkhail contributed to this report.