US strikes intensify in Libya operation 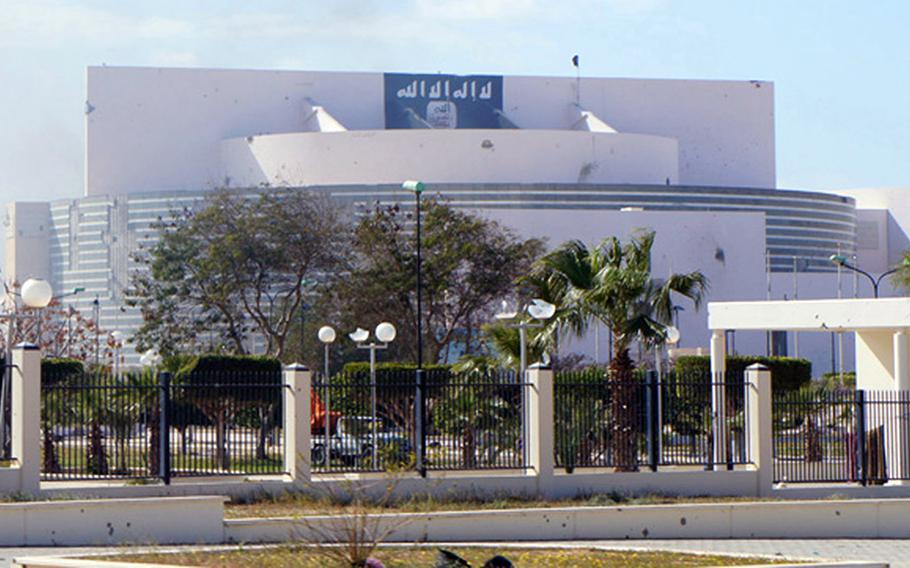 A March, 2015 file photo shows the late Libyan leader Moammar Gadhafi's Ougadougou conference center in downtown Sirte, Libya, which Islamic State fighters had made into their headquarters. The Islamic State flag is affixed to the building. (Rebecca Murray, McClatchy/TNS)

STUTTGART, Germany — U.S. Africa Command launched a second round of airstrikes Tuesday in a growing campaign against the Islamic State group in Libya, where American warplanes are providing air support to government forces conducting a ground offensive.

The campaign is expected to last weeks, according to the Pentagon, and marks the most significant U.S. military expansion in the country since the Islamic State group took root in Libya more than a year ago.

U.S. manned and unmanned aircraft conducted five airstrikes in Libya on Monday and followed with at least two more on Tuesday, said Navy Capt. Jeff Davis, a spokesman for the Pentagon.

The operation will continue until the militants are routed from the coastal city of Sirte, Davis said. He expected the U.S. airstrikes there would continue “for weeks, not months.”

Col. Mark Cheadle, a spokesman for Africa Command, said the initial wave of strikes has helped forces aligned with Libya’s Government of National Accord advance on the enemy.

“We are supporting a GNA ground operation to liberate Sirte with close air support and we are disrupting [the Islamic State group],” he said.

Italian officials said Tuesday that they would consider allowing bases in the southern portion of their country to be used by U.S. forces in the fight against the terrorist group. Africa Command declined to say whether it has requested such permission or what military assets it intends to bring to bear in the fight in Libya, citing operational security.

“As far as where and when the support would be, we will provide support to GNA-aligned forces, to include key information about the fight in Sirte, and manned and unmanned airstrikes against [the Islamic State group]-Libya targets inside Sirte,” Cheadle said. “We have a range of capabilities in the region that will allow us to carry out these airstrikes.”

For months, the United States has been weighing whether to intensify operations against the extremists in Libya. But military officials have repeatedly stated that more robust support hinged on Libya’s fragile government taking shape.

On Monday, the United States launched its strikes against Islamic State group targets at the request of the Libyan government, which could be viewed as a sign of a more cohesive GNA.

While the ongoing operation is only authorized for the GNA’s Sirte campaign, Davis said the United States does “absolutely have a long-term commitment” to Libya’s internationally recognized government.

The strikes are not the first time the United States has attacked in Libya, but two previous aerial attacks were limited to hitting high-value targets and not in support of an offensive by Libyan forces.

In recent months, the Islamic State group has been suffering significant causalities. In April, the group was estimated to have about 5,000 fighters in Libya. Today, the Pentagon puts that number at less than 1,000 fighters in the country.