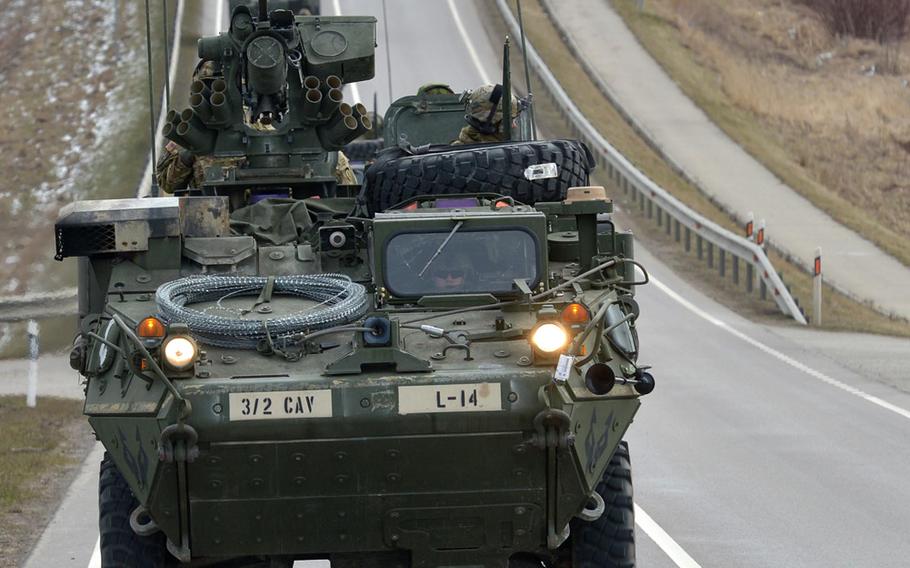 Buy Photo
Strykers from the 2nd Cavalry Regiment convoy from Alytus, Lithuania, to the Polish border, on March 23, 2015. The U.S. plans to spend nearly $1 billion this fiscal year in eastern Europe as part of the European Reassurance Initiative. (Michael Abrams/Stars and Stripes)

Buy Photo
Strykers from the 2nd Cavalry Regiment convoy from Alytus, Lithuania, to the Polish border, on March 23, 2015. The U.S. plans to spend nearly $1 billion this fiscal year in eastern Europe as part of the European Reassurance Initiative. (Michael Abrams/Stars and Stripes) U.S. soldiers from the 1st Cavalry Division, dismount a Bradley fighting vehicle and advance on a target as Hungarian soldiers lay suppressive fire, during a NATO demonstration at the closing ceremony of Iron Sword 2014 in Pabrade, Lithuania, Nov. 13, 2014. U.S. is building infrastructure in places like Lithuania as it plans for a continuing presence in the region. (Keith Anderson/U.S. Army) 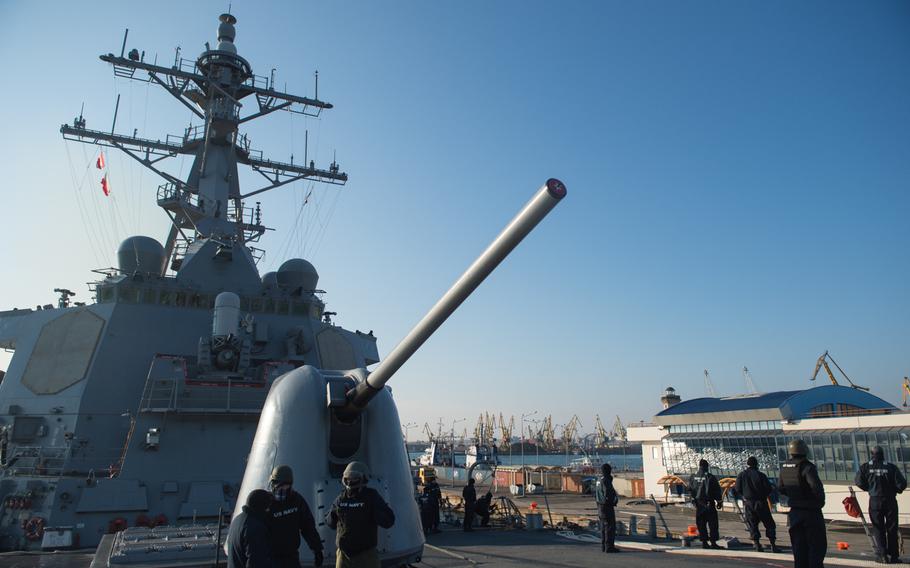 The USS Donald Cook arrives at Constanta, Romania, for a scheduled port visit on Dec. 30, 2014. The Navy has received $3 million as part of the European Reassurance Initiative to make improvements to a port facility on the Black Sea. (Karolina A. Oseguera/U.S. Navy) 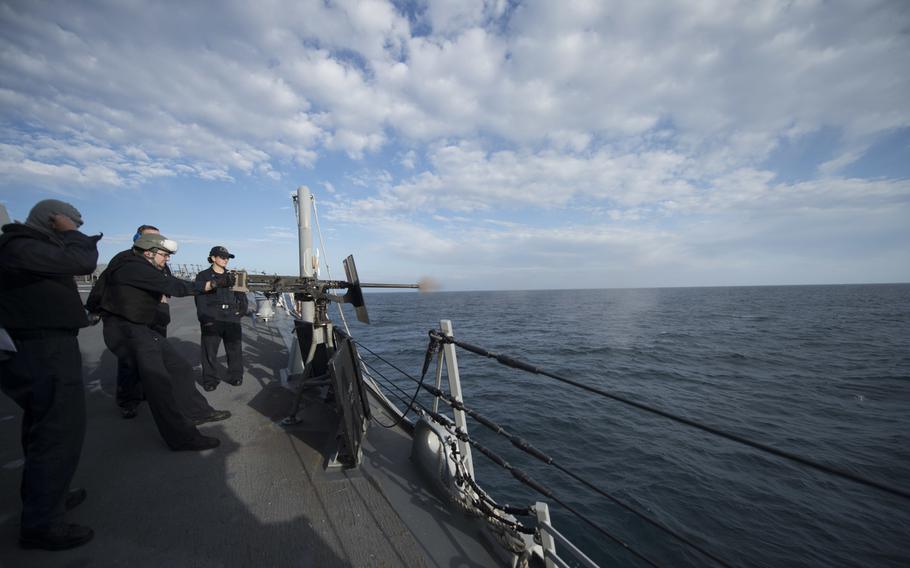 Seaman Elliott Dreiling fires an M2 .50-caliber machine gun during a live-fire exercise aboard USS Jason Dunham in the Black Sea on April 7, 2015. The Dunham is conducting naval operations in the U.S. 6th Fleet area of operations in support of U.S. national security interests in Europe. (Weston Jones/U.S. Navy)

NAPLES, Italy — From Army rotations to bunkered weapons, American military spending in Europe has risen in the past year in an effort to reassure allies nervous over Russian actions in Ukraine.

More is coming in the months ahead. U.S. commanders in Europe continue to draw from roughly $1 billion in contingency funding approved by Congress in December, much of it earmarked for projects still in their earliest stages, including airfield improvements and funding for forces in the Baltics and Ukraine. The military is requesting almost $800 million for the coming fiscal year, and officials say funding will be needed in years ahead to ensure the success of current projects.

“I think everyone’s aware that, especially with infrastructure, some of this will have a tail that goes beyond (Fiscal Year) 2016,” one defense official said.

That official, provided by U.S. European Command and authorized to speak only on background, spoke with Stars and Stripes as the military prepares to update Congress on recent spending under the $985 million European Reassurance Initiative. Funded through overseas contingency operating funds, the ERI is meant to rope off money for exercises, patrols and infrastructure improvements by moving them outside military’s base budget, which is subject to budget caps passed by Congress four years ago.

Much of the funding is dedicated to the most visible parts of U.S. operations on the continent. The rotation of an Army heavy armored brigade eats up about a quarter of the total, while ERI also funds fighter jet patrols over the Baltic states and increased Navy deployments to the Black Sea.

The Air Force decision to keep a squadron of F-15C fighter jets in Lakenheath, England, a line item not included in original planning for the fund, represents another significant chunk, at about $110 million.

Projects include building dining and laundry facilities to accommodate U.S. airmen deployed to small airfields like Lask Air Base in Poland or Siauliai in Lithuania. The Army received more than $64 million to upgrade training ranges across Europe and another $17 million to improve logistics infrastructure on some bases, including warehouse and railheads. The Navy received $3 million to upgrade a port facility on the Black Sea.

Prepositioning sites for weapons and equipment are another focus of the ERI, with funding of $136 million in the current fiscal year — all of it for Army and Air Force. Part of the funding will go to storing tanks, vehicles and other equipment for the rotational Army brigade.

Construction projects are still in the early stages, according to the defense official, and months will pass before work can begin. Engineers are still making site visits, while American embassies in each country are laying the diplomatic groundwork necessary to begin work.

Timelines and funding restrictions remain a challenge, the official said. The military developed ERI as a two-year funding mechanism; Congress chose instead to fund one year at a time. Much of the current fiscal year funding must be used before the end of the fiscal year, Sept. 30, meaning some efforts have to be sped up.

Military construction projects must first be approved by Congress, which also has oversight on funding for foreign military forces.

The availability of funding in future years is, as always, an open question.

The military’s use of contingency funding has drawn more scrutiny in recent years. Ryan Alexander, president of the non-partisan advocacy group Taxpayers for Common Sense, noted that most of the expenses covered by the ERI — such as exercises and infrastructure improvements — have little relation to contingency operations.

“I think it’s part of an all-over trend of putting things in OCO (Overseas Contingency Operations) that they don’t want to be subject to the caps,” she said.