A KC-135 Strantotanker from the 100th Air Refueling Wing refuels a B-2 Spirit from the 509th Bomb Wing in the late hours of Jan. 18, 2017, during a mission that targeted Islamic State training camps in Libya. (Kate Thornton/U.S. Air Force) 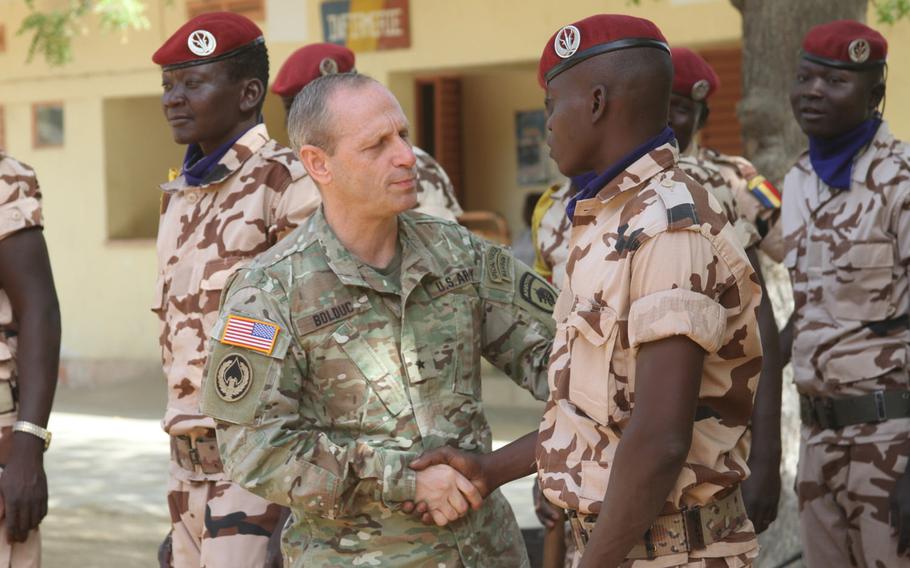 The U.S. military faces a two-decade struggle to help bring stability to Africa, where the lack of an overall government strategy is complicating operations, according to the general in charge of special operations on the continent.

“(T)here are too many conflicting perspectives when it comes to what the (U.S. government) policy should be for Africa,” U.S. Special Operations Command Africa’s Brig. Gen. Donald Bolduc said in a recent article. “The problems in Africa defy solution within a single fiscal year, or the two- to four-year tour of a Geographic Combatant Command commander.”

Bolduc, writing in the Sunday issue of the online Small Wars Journal in an essay titled “The Gray Zone in Africa,” said it will take “at least a generation for a policy to become effective.”

The challenges facing the U.S. include weak central governments in Somalia and Libya, where extremists groups have sought to take advantage of the instability. Those threats amount to “gray zones,” military parlance for areas of military operation that fall short of open war for American forces.

Bulduc, whose headquarters are in Stuttgart, Germany, cited eastern and northern Africa as areas where a more cohesive U.S. policy is needed.

Chaos in Libya, brought on when NATO helped overthrow dictator Moammar Gadhafi in 2011 but failed to help stabilize the country, has caused a large migrant flow to Europe. That development has divided governments inside the European Union, America’s top trading partner. Yet the U.S. lacks a clear strategy for confronting threats emanating from Africa’s north, which now affect Europe, Bulduc said.

Adding to the challenges is the growing presence of China and Russia, which have sought to exert more influence. Beijing is poised to open its first overseas military base in Djibouti, a small but strategic country that borders Somalia and hosts U.S. forces. Russia has met with Libyan officials and has reportedly deployed small numbers special operations to North Africa in a sign of growing interest.

“Further complicating this environment is the fact that the United States is not at war in Africa, but the partners we support are at war,” Bulduc wrote.

U.S. Africa Command has gotten more aggressive in Somalia and Libya over the past year, targeting militant groups in both countries with airstrikes and deploying special operations forces to work with local troops. That initiative has not been without risks. In early May, a Navy SEAL was killed in Somalia while supporting government forces fighting the Islamic militant group al-Shabab.

Bulduc said the U.S. as an operational rule should avoid a situation in which it does the fighting for local militaries.

“We must not replace our partners’ will with U.S. capability and capacity,” Bulduc wrote, adding that partners must “own the problem, own the fight, and own the solution.”

The U.S. needs to move faster in identifying emerging dangers before they grow into threats to governments and regions, he said.

“The key to success in the African operational environment is to deal with problems while they are small,” Bolduc wrote.

Over the years, delayed reactions have complicated military efforts in virtually every region of Africa, including Somalia, Libya and the Lake Chad basin region, where Boko Haram threatens Nigeria and surrounding countries, he said.

“The trans-regional and trans-national aspects of the threat must be addressed and failure to do so will result in gaps that ... complicate the security environment.”