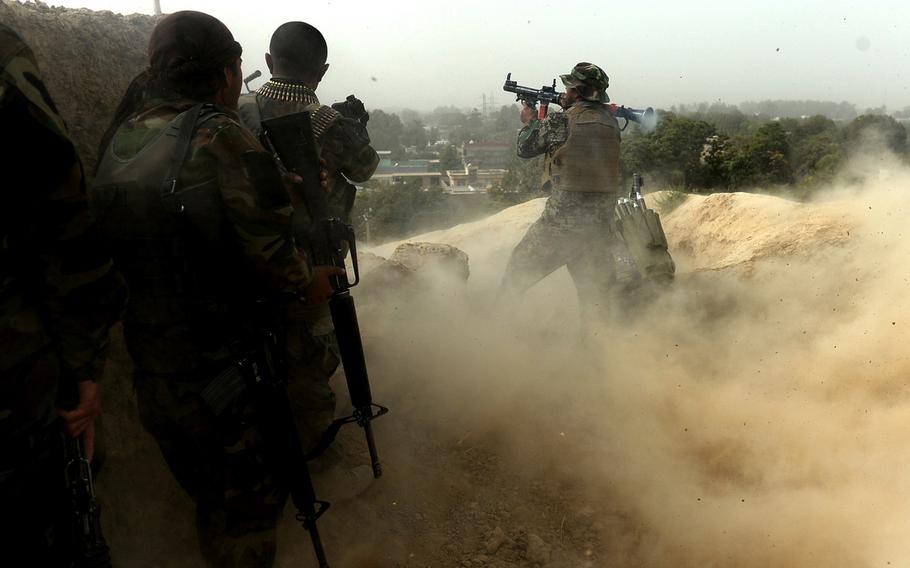 Buy Photo
An Afghan soldier fires a rocket-propelled grenade at Taliban positions on the outskirts of Kunduz during mop-up operations in October 2015. The Taliban launched coordinated attacks Monday in embattled southern Helmand province and in the northern city of Kunduz, which was overrun by the insurgents a year ago. (Stars and Stripes)

KABUL, Afghanistan — U.S. special operations forces arrived Monday to support Afghan forces in the northern city of Kunduz as local officials said the Taliban had entered the city a year after they briefly took control of the provincial capital.

Heavy fighting broke out in northern Kunduz province, where a year ago to the day a U.S. airstrike, the result of a series of errors, killed 42 people at a Doctors Without Borders hospital in the provincial capital. The Taliban also launched coordinated attacks Monday in embattled southern Helmand province, where the U.S. has conducted more than a dozen strikes since Thursday.

U.S. Navy Capt. Jeff Davis, a Pentagon spokesman, said U.S. forces had “multiple assets” in Kunduz, to include U.S. Special Forces “enablers." He also said the Afghan air force had conducted multiple airstrikes to support Afghan ground forces there. Initially, the Pentagon reported there were U.S. airstrikes but later said they were Afghan.

“The situation remains fluid, we are continuing to watch it closely and work with our Afghan partners,” Davis said. “They are responding to increased Taliban activity in the area.”

Kunduz resident Rahimullah Shakir said that Taliban fighters started heavy attacks on the outskirts of the city Monday morning. Shops were closed and mortar shells and bullets were occasionally hitting the central parts of the city.

By the evening, he said the Taliban had reached the central roundabout in Kunduz, where they raised their signature white flag one year ago.

Doctors Without Borders has not yet returned its operations to the city and canceled a planned memorial ceremony there because of the fighting, said Raphael Piret, a spokesman for the charity. International staff who had traveled to the city were being evacuated.

At the time of the 2015 hospital strike, Afghan forces were battling Taliban fighters who had overrun and briefly held the provincial capital — the group’s first capture of a major urban center since the insurgents were ousted from power in 2001.

This year, the insurgents — seeking to seize a major population center — have repeatedly threatened the capitals of Kunduz and Helmand provinces since their summer campaign began in April. U.S. and Afghan officials have pledged that they will prevent any major urban center from falling to the insurgents.

About 4 a.m. Monday, Taliban fighters had occupied homes in Kunduz city and were using residents as human shields, Brig. Gen. Dawlat Waziri, a spokesman for the Defense Ministry, said in a statement earlier Monday.

“Defense and security forces, with the support of air forces, have responded to their attacks, and right now the situation is totally under their control,” he said. To avoid civilian casualties, they are carefully clearing the city, he said.

The Taliban claimed online that they had attacked from four directions, overrunning eight checkpoints and killing many soldiers. A number of weapons were also captured, said Taliban spokesman Zabihullah Mujahid.

“Efforts underway to quickly establish normalcy in Kunduz so people restart work,” Mujahid said on Twitter later in the day, after he posted a video of someone raising the Taliban’s flag on the roof of a white-and-red building in the center of the roundabout.

“Mujahedeen are treating people with kindness,” he added, using the Arabic word for a Muslim holy warrior.

In the south, a suicide attacker detonated a car bomb in the early morning outside the district governor’s office in the Nawa district of Helmand province, roughly 20 miles from the provincial capital of Lashkar Gah, the insurgents claimed. Gunmen then stormed the building and by 8 a.m. had taken the district governor’s office, police headquarters and all of the district’s checkpoints, seizing many weapons and a large amount of ammunition, the Taliban said.

Abdul Wadoud Popal, a parliament member representing Helmand province, said his brother, Ahmad Shah Salim, the district police chief, was killed in the attack along with his nephew and 14 other Afghan security personnel.

“Right now, the government security personnel are spread out in the district and they are fighting the Taliban,” Popal said.

“My brother and I had informed the authorities four days ago in [the provincial capital] Lashkar Gah and Kabul that the road is blocked by the enemy and there is a danger of the fall of the district,” Popal said. “The security forces could not get any help in the last four days — no food, no water and no reinforcements.”

The attacks came as Afghan officials prepare for a major donor conference on Tuesday and Wednesday in Brussels, where they will set out their vision for reform in hopes of securing continued financial and political backing from the international community. Donors are expected to pledge $3 billion through 2020, on top of the roughly $5 billion a year it receives, mostly from the United States, to cover defense costs.

The Taliban have successfully overrun several checkpoints this summer, seizing caches of weapons, ammunition and other equipment in Helmand, Kunduz and several other provinces.

U.S. officials have blamed poor Afghan leadership for the fall of such outposts, claiming that the frontline soldiers often don’t receive proper equipment, supplies and information from their superiors. Late Monday, U.S. Navy Cmdr. Kevin West, a spokesman for the NATO-led Resolute Support mission, said Afghan security forces in Helmand had the situation in Nawa under control, but U.S. combat enablers were in the area and standing by in case they were needed.

U.S. forces had conducted 13 airstrikes in the province since Sept. 29, West said, in the districts of Nawa, Garmsir, Nad Ali and Marja.