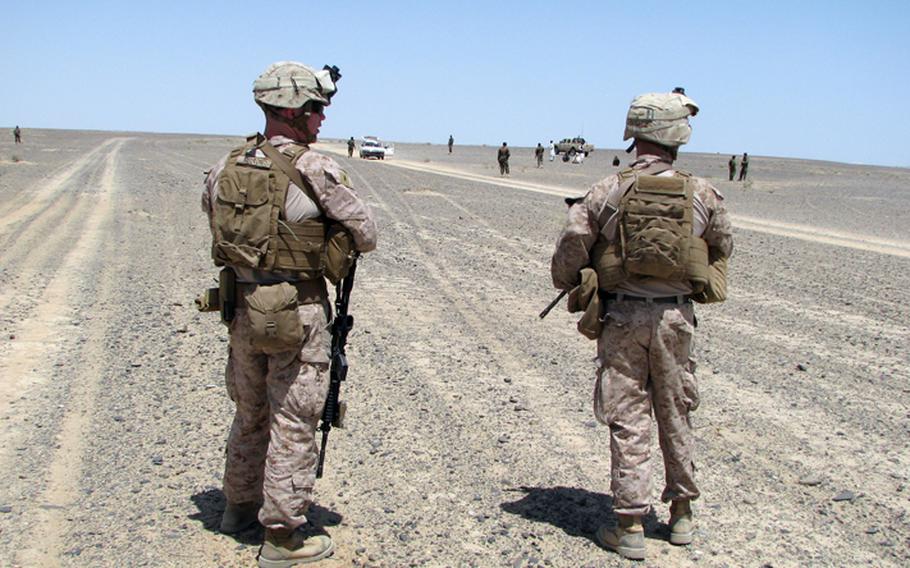 U.S. Marines hang back and observe as Afghan National Army soldiers question the occupants of a car stopped at a checkpoint just outside Camp Dwyer in southern Helmand Province in Afghanistan. Security patrols around the base are one of the few tasks that put Marines "outside the wire" these days, now that the Afghans have taken the lead in security across much of the country. (Jay Price/MCT)

AFGHANISTAN — The head of coalition special operations forces in Afghanistan said there’s been a major change in tone since the command he heads was set up last summer, much of it due to the rapid development of elite Afghan forces.

“When I first got here, the mantra was ‘We aren’t winning, but we’re leaving anyway,’” said Army Maj. Gen. Tony Thomas, commander of the 13,000 U.S. and allied troops of Special Operations Joint Task Force-Afghanistan.

There’s since been an “extraordinary shift,” Thomas said, with Afghan units that fight alongside or receive training from U.S. special operators quickly gaining the ability and desire to take over the war.

Groups including the Afghan Army commandos, Afghan Local Police and special night raid units are moving toward self-sufficiency at ground level, he said.

U.S. forces will continue to partner with them on operations through 2013, Thomas said, but in 2014, more units will operate independently, while U.S. forces shift to building Afghan command-and-control competence.

“The tempo is still relentless,” he said. “The difference is it’s less us and more our Afghan partners.”

One big advantage of greater Afghan participation is much better human intelligence, he said. But the task force will focus on increasing the Afghan’s own high-tech intelligence gathering, as well, with plans to provide surveillance planes to Afghanistan by the end of the year, he said.

After 2014, with the NATO combat mission in Afghanistan officially over, Thomas said task force would still be ready to provide assistance and training to the Afghans “as much as they need.”

“And I think with that very distinct line, we’ll be able to support them in almost every endeavor,” he said.