US special forces in firefight with Taliban at Kunduz 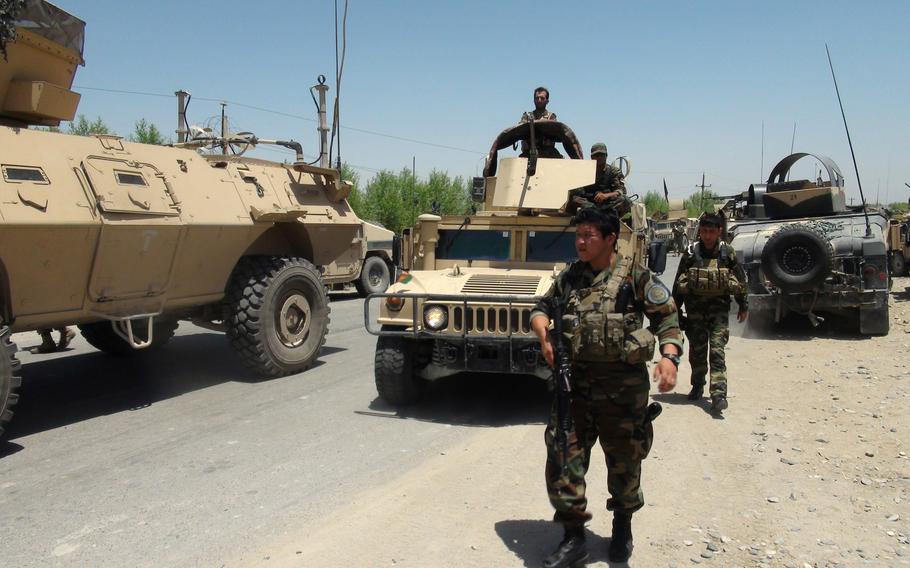 KABUL, Afghanistan — The battle for Kunduz is drawing U.S. forces back into the fight just 10 months after the NATO-led coalition formally ended its combat mission in Afghanistan and stepped back into an advise and assist role.

For a second time since Kunduz fell to the Taliban this week, U.S. special operations troops exchanged fire Thursday with Taliban fighters, even as American warplanes blasted insurgent targets to support Afghan government forces battling to regain the city.

An unexpected government thrust early Thursday into the heart of the city quickly deteriorated into street-by-street fighting, with neighborhoods changing hands repeatedly throughout the day. Late Thursday police and residents said fighting eased after sundown, and President Ashraf Ghani declared the city secure.

At the same time, acting Defense Minister Masoom Stanekzai acknowledged that “small guerilla forces” remain “in various neighborhoods” and it was unclear if Ghani’s declaration was premature.

An unexpected government thrust early Thursday into the heart of the city quickly deteriorated into street-by-street fighting, with neighborhoods changing hands repeatedly throughout the day.

“You can’t say who is winning in these areas; one moment the government advances and then the Taliban,” Aminullah Aideen, a member of the provincial council, said by telephone from the beleaguered city.

Since the end of the NATO combat mission last year, the remaining U.S. and other international forces have been in Afghanistan in a training and advisory role while retaining the right to defend themselves. In the chaos of Kunduz, however, the lines between adviser and combatant have become blurred.

Citing the right of defense, U.S. officials also said American aircraft conducted two more airstrikes Thursday afternoon on the outskirts of the city to “eliminate threats to coalition and Afghan forces.” That brought the total number of U.S. airstrikes since the city fell to eight, including one Wednesday called by U.S. special operators who fought to prevent the Taliban from breaching defenses at Kunduz airport.

U.S. officials insist that U.S. actions in the Kunduz fighting do not signal any change in the current“ "assist and advise” mission and were within the rules of engagement set down as NATO combat operations drew to a close.

“Afghan Security Forces have full responsibility for their operations in Kunduz,” Tribus said. “Resolute Support servicemembers, to include special forces, are involved in Kunduz in an advise and assist capacity, as Resolute Support is a non-combat mission. However, our servicemembers have the right to protect themselves if necessary.”

But the fighting in Kunduz has underscored how Afghan forces must still rely on U.S. military power, said Jason Lyall, director of the Political Violence FieldLab at Yale University.

“It is likely that without U.S. airstrikes and SOF (Special Operations Forces), the airport would have fallen,” he said. “The U.S. will face some hard choices about whether its current level of commitment is sufficient to do anything more than triage emergencies like Kunduz City. The Taliban are now capable of coordinating campaigns across districts and provinces, and the U.S. simply doesn’t have the resources to backstop the ANSF in all threatened areas.”

In Washington on Wednesday, White House spokesman Josh Earnest told reporters that President Barack Obama’s plan to withdraw almost all American troops by the end of 2016 will depend on conditions in Afghanistan, but cautioned against “the inclination to essentially make snap decisions on policy almost literally overnight.”

“That’s why we’re going to continue to monitor the efforts by the Afghan government and Afghan security forces to retake Kunduz, and that will factor into a longer-term assessment of the conditions on the ground, which will influence longer-term policy decisions that the president will have to make,” he said.

The contradictions between the right of self-defense with the non-combat nature of the mission are likely to continue as growing violence escalates, especially in the north, straining Afghan security forces.

Heavy fighting was also reported in the neighboring provinces of Baghlan and Takhar. Military convoys trying to reinforce Kunduz were bogged down in Baghlan, as Taliban overran several government centers and pressured the provincial capital of Pul-i-Kumri. And in Takhar, insurgents burned down government headquarters in at least one district before being pushed out by security forces, according to a local lawmaker.

In Kunduz, residents in the city center said fighting ebbed in the morning after government forces reached the center of the city but resumed as the Taliban regrouped. Through the afternoon, Afghan and Taliban forces played a deadly game of capture the flag in the main square, which changed hands repeatedly.

“Taliban took over the main square again and the flag that was raised by the army is again changed to” the white Taliban flag, said Mohammad Sakhi, a resident of downtown Kunduz who only hours before had jubilantly described waking up to government troops securing the area.

Throughout the day helicopter gunships buzzed overhead, as explosions and small arms fire echoed through the streets, witnesses said.

None of the reports could be independently confirmed, with the Taliban also claiming to retain their grip on the city.

The seizure of the city of 300,000 was a major coup for the Taliban. The city, on a strategic crossroads in the country’s north, was their last significant stronghold before a U.S. invasion ousted them from power in 2001. In a report released on Thursday, investigators for Amnesty International said they had received credible reports of a “reign of terror,” with murder and gang rape by Taliban squads roving the city.

Much is riding on the government’s efforts to regain control over a crisis that has raised questions about the Afghan security forces’ performance.

“However the government wants to try to spin it, the fall of a provincial capital, even if short-lived, is a significant psychological blow to the national unity government,” wrote Borhan Osman in a report for the Afghan Analysts Network. Even if the city is soon secured, “in addition to the loss of lives and the damage to property, civilians are unlikely to regain their confidence in the government’s ability to protect its population,” he said.

That was already evident Thursday, when hundreds of protesters gathered near the presidential palace in Kabul, demanding his resignation, a day after some parliamentarians called for his ouster over the debacle in Kunduz, The Associated Press reported.

Ghani’s office said Thursday that it would send a delegation to Kunduz to investigate why it had fallen so quickly. In a post on Twitter, the president vowed to punish “those who have neglected their duties.” Zubair Babakarkhail contributed to this report.