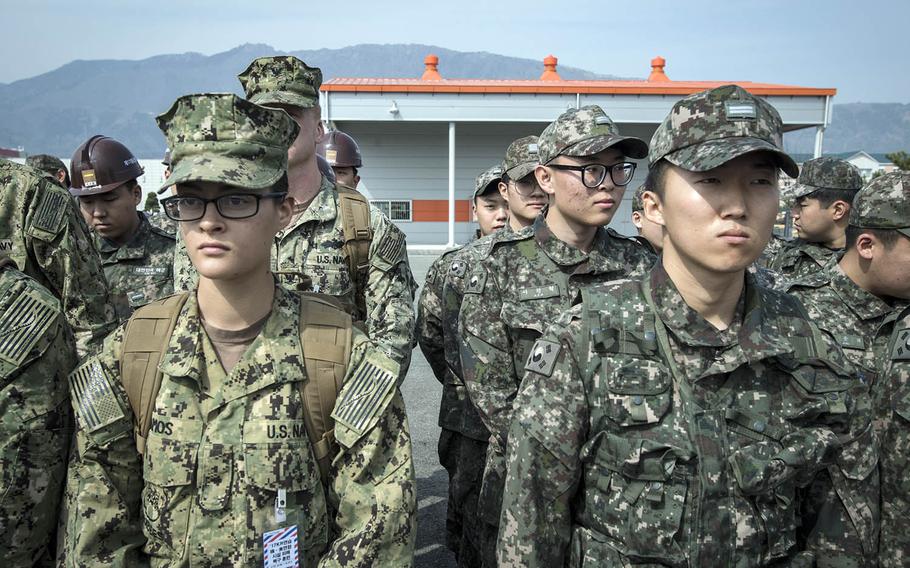 SEOUL, South Korea — U.S. military exercises with South Korea will be held after the Olympics as planned despite a demand for a complete suspension from the North, the Pentagon said.

The planned war games cast a shadow over hopes that the recent détente between the two Koreas may lead to a broader dialogue with the United States after months of saber rattling over the North’s nuclear weapons program.

Defense Secretary Jim Mattis reiterated that military options remain at the ready to make sure diplomats have leverage in pressuring Pyongyang to denuclearize.

“This is still in the diplomats’ hands, as you know,” he told reporters en route to Hawaii.

“We could fight tonight, shoulder to shoulder with the Koreans — or South Koreans, if they’re attacked,” Mattis added. “An attack on [South Korea] will be severely rebuffed if it’s attempted.”

The joint drills known as Key Resolve and Foal Eagle are held every year in the spring and always infuriate the North, which considers them a rehearsal for an invasion.

Washington agreed to delay them until after the Olympics, which will be held on Feb. 9-25 in the South Korean alpine town of Pyeongchang. Mattis has said they would resume after the March 8-18 Paralympics.

But North Korea, which agreed to participate in the Winter Games as part of rare talks with the South, demanded a complete suspension.

“The South Korean authorities should stop the war games with the U.S. forever and refrain from introducing the U.S. nuclear strategic assets and aggression forces to South Korea,” the state-run Korean Central News Agency said Thursday as part of a call for unification.

The Pentagon rejected that idea, although it didn’t give a new start date for the exercises. South Korean military officials also have said the drills would resume but it’s too soon to disclose the exact date and size. North Korea has frequently responded to the exercises — and similar drills held by the allies in the fall — with missile tests and a stream of bellicose rhetoric. U.S. and South Korean military officials insist the war games, which involve tens of thousands of troops, are defensive in nature and necessary to maintain a constant state of readiness. “We’re deconflicting during the period of the Olympics, and exercises will continue immediately after the Olympics,” joint staff director Lt. Gen. Kenneth McKenzie said Thursday during a press briefing in Washington. “There’s no suspension contemplated.”

A senior South Korean administration official said the planned exercises add urgency to efforts to use the current conciliatory mood to bring all sides to the table.

“If the allies resume their exercises, North Korea will likely protest strongly against them. There is a high chance of North Korean provocations, which would make the international community impose further sanctions,” Unification Minister Cho Myoung-gyon said Friday, according to the Yonhap News Agency.

“It is a realistic guess that a vicious circle of repeated provocations and sanctions could come back soon,” he said.

The U.S. has welcomed recent breakthrough talks between the two Koreas but vowed to maintain its campaign of punishing economic sanctions and diplomatic pressure aimed at isolating the North Korean regime and forcing it to abandon its nuclear ambitions.

The North has shown rapid progress toward its goal of developing a nuclear weapon that could reach the U.S. mainland. It test-fired three intercontinental ballistic missiles and conducted its sixth and most powerful nuclear test last year.

Mattis was to discuss the security situation on the divided peninsula and other alliance issues Friday during a meeting in Hawaii with his South Korean counterpart Song Young-Moo.

Some 28,500 U.S. servicemembers are based in South Korea, which remains technically at war with the North after their 1950-53 conflict ended in an armistice instead of a peace treaty.