US, South Korea to open cost-sharing negotiations this week in Hawaii 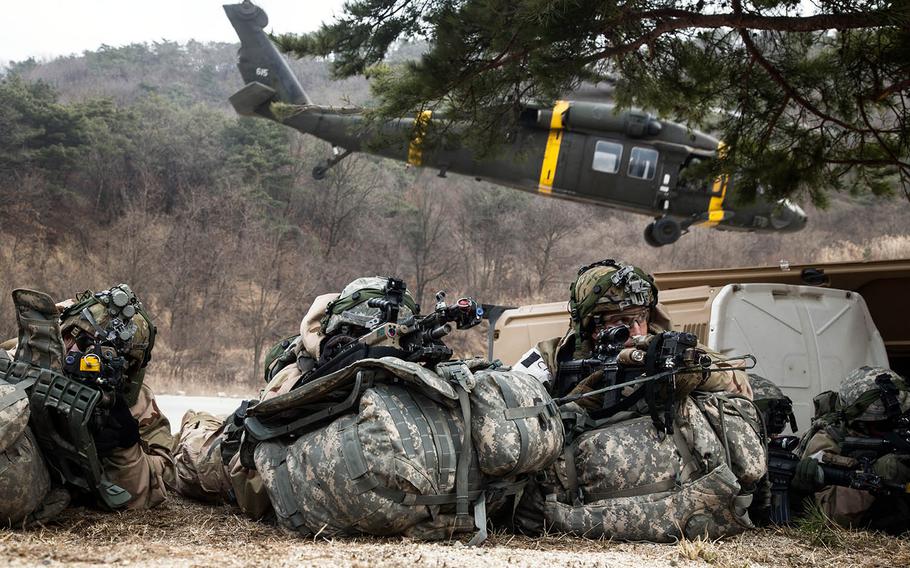 SEOUL, South Korea — The United States and South Korea will begin negotiations this week on sharing the cost of stationing about 28,500 American troops on the divided peninsula, the foreign ministry said Monday.

Talks about shouldering the burden between the two allies have often been bumpy, but they’re expected to be more contentious this year as President Donald Trump has signaled that he may press for the South to increase its contribution.

The countries also face concerns about a possible rift as South Korea presses ahead with efforts to engage with the North despite Washington’s hard line over the communist state’s nuclear weapons program.

The current special measures agreement, which was reached in 2014 and has South Korea paying about $890 million this year, or just under half of the total, expires Dec. 31.

The first round of talks on the 10th SMA will be held from Wednesday to Friday in Honolulu with veteran diplomat Chang Won-sam leading the South Korean side and State Department official Timothy Betts leading the U.S. delegation, according to a press release.

“The delegations from the two sides will be trying to reach an agreement that helps strengthen the South Korean-U.S. alliance and joint defense readiness,” the ministry said. “Our government will try to produce reasonable results that can be accepted by our people.”

It didn’t say how long the talks were expected to last, but the final deal must be ratified by South Korean legislators. The 2014 agreement took months to gain approval amid South Korean concerns over a lack of transparency about how the funds are spent by the U.S. side.

South Korea has seen its share of the non-personnel costs for U.S. forces in South Korea rise to around 960 billion won (nearly $890 million) this year from 150 billion won in 1991, the first year the SMA was implemented.

Most of the money is used to pay for South Korean labor, rent, utilities and the construction of barracks and other military facilities. South Korea may take a more confrontational stance than usual because of Trump’s trade politics, including his recent proposal to impose stiff tariffs on imported steel and aluminum, said Van Jackson, an international relations expert at Victoria University of Wellington in New Zealand.

“The traditional thinking for South Korea is that the alliance comes first, so any disagreement about how to distribute the costs of the alliance were subordinate to the priority of maintaining the alliance,” Jackson said in an email.

He also noted South Koreans are worried about the U.S. president’s threats of military action against the North. “Under the circumstances, South Korea can bristle at greater burden sharing demands because Trump is being seen as unreasonable and the most likely catalyst for a war.”

Trump raised concern in South Korea during the presidential campaign when he criticized what he called the unbalanced nature of the security alliance, saying Seoul and other allies should pay more for their defense.

Since taking office, Trump has toned down his rhetoric, but the issue came up during two summits held by Trump and South Korean President Moon Jae-in, including their most recent meeting in Seoul in November.

The two leaders “acknowledged the desire for equitable cost sharing of United States military forces stationed in the Republic of Korea,” a joint statement said after the November summit.

They vowed “to continue to strengthen the alliance’s combined defense posture and capabilities, including through defense cost-sharing measures in the upcoming special measures agreement discussions.”

Anticipating a tough stance by Trump, Moon appointed Chang, who was then ambassador to Sri Lanka, last year to begin preparing for the negotiations.

Trump demanded last year that South Korea pay what he said was a $1 billion price tag for the controversial battery, but the White House later walked back those comments.

Kim Dongyub, a professor at South Korea’s Kyungnam University, also said there are still concerns about how the funds are spent despite new oversight provisions in the 2014 agreement.

“I think the biggest problem in the defense cost sharing issue is transparency of execution,” he said.