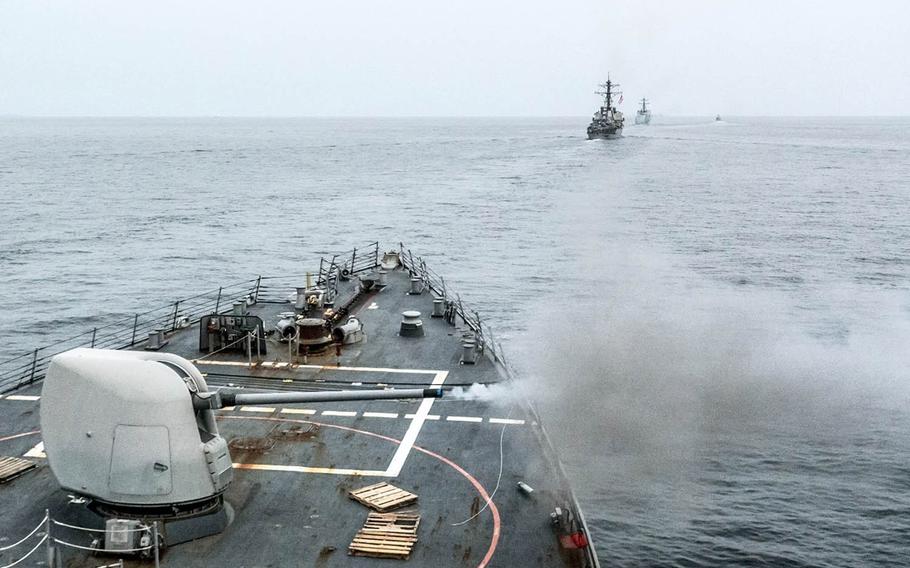 The USS Stethem, foreground, takes part in a live-fire exercise off the Korean peninsula in October. The guided-missile destroyer kicked off missile detection and tracking drills with South Korea and Japan in those waters, Friday, Jan. 20, 2016. (Tyrone Pham/U.S. Navy)

The three-day exercise began amid fears that the North may test-fire an intercontinental ballistic missile or stage another provocation in connection with Donald Trump’s inauguration ceremony on Friday.

The Yokosuka, Japan-based guided-missile destroyer USS Stethem, Japan’s JDS Kirishima and South Korea’s Sejong the Great participated in missile detection and tracking drills in the waters off the divided peninsula and Japan.

No missiles were fired as the Aegis-equipped ships faced simulated targets in waters within the 7th Fleet area of operations, said Lt. Josh Kelsey, a U.S. Naval Forces Korea spokesman.

“The U.S. Navy continually seeks every occasion to strengthen relationships and interoperability with participating allies and partners while further developing maritime capabilities and capacity,” he said in a statement.

Relations between South Korea and Japan have been soured by longtime disputes, including a spat over a statue put up in front of the Japanese consulate in the port city of Busan that commemorates wartime sex slaves called “comfort women.”

But the three countries have agreed to boost diplomatic and military cooperation against North Korea, which has shown alarming progress in its nuclear weapons program.

The increased pace occurred despite U.N. Security Council resolutions banning the use of ballistic missile technology and two rounds of tightened economic sanctions to punish the violations.

North Korean leader Kim Jong Un recently said his country is in the “final stages” of developing an ICBM. That would be a key step toward its stated goal of targeting the U.S. mainland with a nuclear-tipped missile.

Trump, who has yet to announce his policies regarding North Korea, responded to Kim’s declaration on Twitter saying, “It won’t happen!”

North Korea’s Foreign Ministry retorted that “the ICBM will be launched anytime and anywhere” as ordered by the country’s leadership.

Experts are divided over how close the North is to developing an ICBM and miniaturizing nuclear warheads that would fit on one. Some say one could be ready as early as 2020.

Unidentified South Korean military officials also told the Yonhap news agency that the North probably has built two new ICBMs and placed them on mobile launchers to prepare for a test, although the defense ministry said it couldn’t confirm that report.

This weekend’s missile-defense exercise is the third of its kind, following similar drills in June and November last year, according to Yonhap.