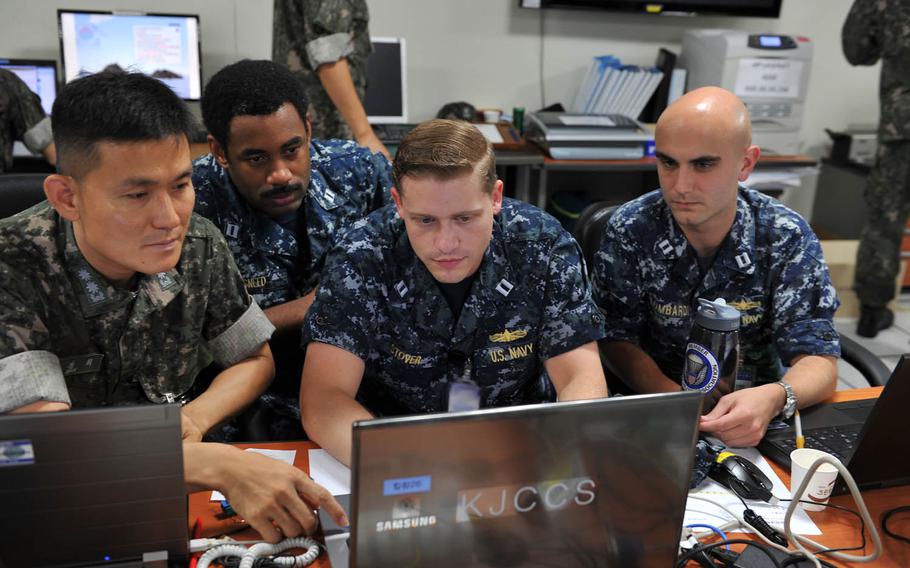 U.S. and South Korean sailor interact during exercise Ulchi Freedom Guardian 2014. UFG is an annual defense-oriented exercise, designed to enhance readiness, protect the region and maintain stability on the Korean Peninsula. This year's exercise is underway and scheduled to run through Aug. 28. Approximately 50,000 South Korean and 30,000 U.S. troops are taking part, according to South Korea's Ministry of National Defense. (Courtesy of the U.S. Navy)

The annual computer simulation drill is scheduled to run through Aug. 28, with about 50,000 South Korean and 30,000 U.S. troops taking part, according to South Korea’s Ministry of National Defense.

Combined Forces Command described UFG as “a routine and defense-oriented exercise designed to enhance CFC readiness, protect the region and maintain stability on the Korean peninsula.” The exercise is planned months in advance and is not connected to real-world events, it said.

The U.N. Command Military Armistice Commission has informed the North Korean military of the exercise dates and the “non-provocative nature” of the drill, the CFC said.

Officials would not discuss scenarios being rehearsed during UFG, a spokesman for South Korea’s Joint Chiefs of Staff said.

The exercise is not being altered in any way because of ongoing concerns with North Korea, including an Aug. 4 land mine explosion that maimed two South Korean soldiers, CFC said Monday. An unknown number of North Korean troops crossed into South Korean territory between July 24 and Aug. 3 and planted the mines. One soldier lost both legs, and another lost a foot.

A special investigation team from U.N. Command found that North Korea had recently placed the wooden box land mines along a known South Korean patrol route, and ruled out that the devices had been planted long ago and drifted from rain or shifting soil.

Vowing retaliation, South Korea responded by restarting anti-Pyongyang propaganda broadcasts through loudspeakers across the border. North Korea, which said Friday it uses land mines only for defense, said the allegation “makes no sense” and has denied involvement in the attack, according to The Associated Press.

Australia, Canada, Columbia, Denmark, France, New Zealand and the United Kingdom – all of which are U.N. Command sending states – are participating in the exercise, which will be monitored by the Neutral Nations Supervisory Commission.