US, South Korea agree to deploy THAAD amid rising tensions 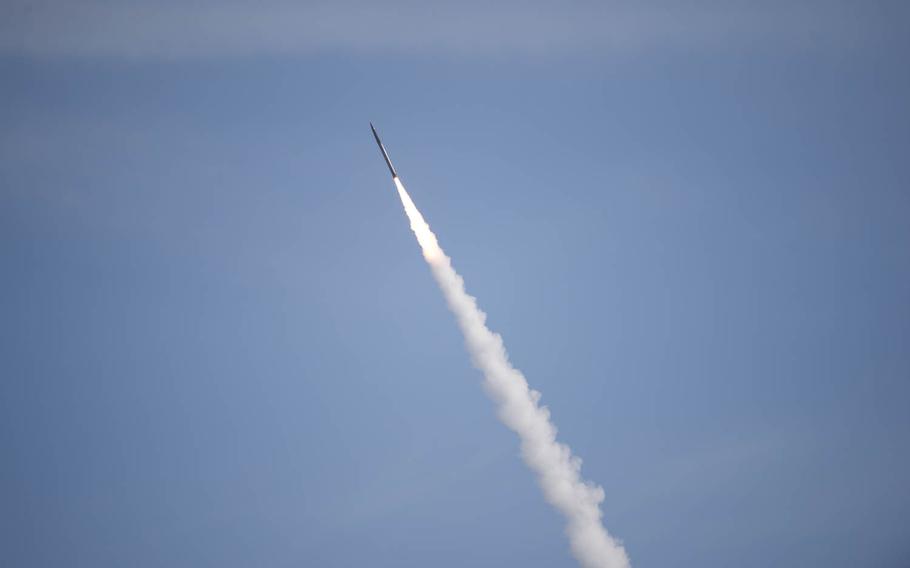 A Terminal High Altitude Area Defense, or THAAD, interceptor is launched from a THAAD battery on Wake Island, during a test in 2015. During the test, the THAAD system successfully intercepted two air-launched ballistic missile targets. (Ben Listerman/Missile Defense Ag)

South Korea began talks with the U.S. on the Terminal High-Altitude Area Defense system, known as THAAD, after North Korea staged its fourth underground test in January, followed a month later by a long-range rocket launch that sent a satellite into orbit. Seoul had been hesitant because of Chinese objections.

A joint working group is close to determining the best location for THAAD, and the plan is to have the system in operation by the end of next year at the latest, a senior South Korean official said Friday.

Despite a new round of tough U.N. sanctions, North Korea has defiantly staged several other missile tests in recent months, including firing one from a submarine and launching a mid-range ballistic missile at least 620 miles high.

“North Korea’s continued development of ballistic missiles and weapons of mass destruction require the alliance to take this prudent, protective measure to bolster our layered and effective missile defense,” Gen. Vincent Brooks, the commander of U.S. Forces Korea, said in a statement.

China, a traditional ally of the North, backed tough sanctions against Pyongyang but objects to the plans for THAAD, fearing the radar system could threaten its own country. Russia has similar concerns.

"China expresses strong dissatisfaction and resolute objection to this,” the Chinese Foreign Ministry said of the THAAD decision in a statement carried by the official Xinhua news agency.

The U.S. and South Korea stressed that the missile defense system will be focused only on North Korea and will enhance the alliance’s capabilities.

The decision was recommended by Brooks, who also leads the combined forces, and South Korean Defense Minister Han Min-koo after formal consultations that began in early February, the statement said. It was approved by both governments.

A joint working group is in the final stages of proposing a site for the system, according to the South Korean Ministry of Defense.

"South Korea and the U.S. are working closely together to deploy the THAAD system as soon as possible," Yoo Jeh-seung, the ministry’s deputy minister for policy, told reporters.

"The allies aim to be able to start actually operating THAAD in South Korea at least by the end of 2017, but we will make efforts to complete deployment before the target period,” he added.

The two sides are balancing the need to ensure the system’s effectiveness with environmental, health and safety concerns. Several Korean cities already have seen protests with residents demanding that the system not be placed in their midst.

Yoo said the site should be announced in “a couple of weeks,” but the specific location will be kept secret for security reasons.

At least three cities have been cited as possible candidates, according to South Korean news agency Yonhap. It reported that those include Wonju, an eastern city near the heavily militarized border; the southern town of Chilgok; and Pyeongtaek, which is near Camp Humphreys, site of USFK’s new headquarters.

The divided peninsula technically remains at war after the 1950-53 conflict ended with an armistice instead of a peace treaty. The U.S. has about 28,500 servicemembers stationed in South Korea.