US soldiers under investigation after late-night brawl in Poland 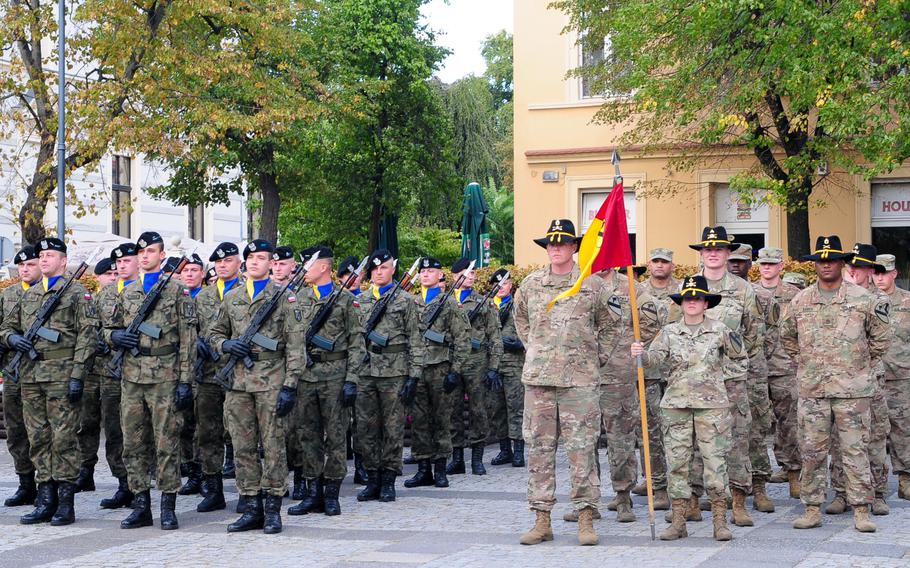 STUTTGART, Germany — The U.S. Army said it is cooperating with a Polish investigation into allegations that soldiers on Friday beat up a local dentist and two of his sons in the western Poland city of Skwierzyna.

Polish authorities are investigating whether at least three U.S. soldiers based in the area were involved in the fight, which local media said resulted from a late-night dispute outside an apartment building.

U.S. troops have become a steady presence in various western Poland towns, which serve as outposts for rotational U.S.-based armored brigades carrying out missions in Europe. The 1st Armored Brigade Combat Team, 1st Cavalry Division out of Fort Hood, Texas, has units based in the Polish towns of Skwierzyna, Boleslawiec, Torun and Zagan.

The altercation happened about 60 miles from Poznan, where the U.S. Army keeps a tactical headquarters to oversee the roughly 5,000 ground troops that operate along NATO’s eastern flank in a mission to deter potential Russian aggression.

“We take any allegation of Soldier misconduct seriously and are fully cooperating with Polish authorities to help determine the facts of this incident and ensure that appropriate action is taken,” Master Sgt. Nathan Hoskins, a spokesman for the Poznan-based Mission Command Element, said Tuesday in an email.

Hoskins said he couldn’t confirm how many soldiers were involved or what might have sparked that altercation. The soldiers under investigation remain on duty while the probe continues, he said.

The skirmish happened on Friday outside an apartment complex, according to local media reports.

The soldiers caused a disturbance when they pounded on an apartment door at a late hour. The doctor and sons attempted to calm the situation, according to local media reports. A fight ensued and all three Polish men were injured in the brawl, media reports stated.

The soldiers then fled the scene while locals called an ambulance, according to the reports.

Hoskins said the Army is committed to being “good neighbors” and that more information will become available as the investigation continues. For now, the Poles are leading the investigation.

“We are invited guests of Poland, and the Polish authorities have jurisdiction over any cases like this that occur within their country,” Hoskins said. I can’t speculate on whether or not they will release jurisdiction to U.S. authorities.”

During the past four years, the U.S. has beefed up operations in Poland, which Army leaders have described as a new “center of gravity” in Europe because of its strategic location along NATO’s eastern borders.

Poland also has long sought a larger and more permanent U.S. military presence in the country and has offered to fund a permanent base there.

During an appearance at the White House last month with President Donald Trump, Polish President Andrzej Duda said a new base could be called “Fort Trump.”

Trump said a base in Poland is worth consideration.