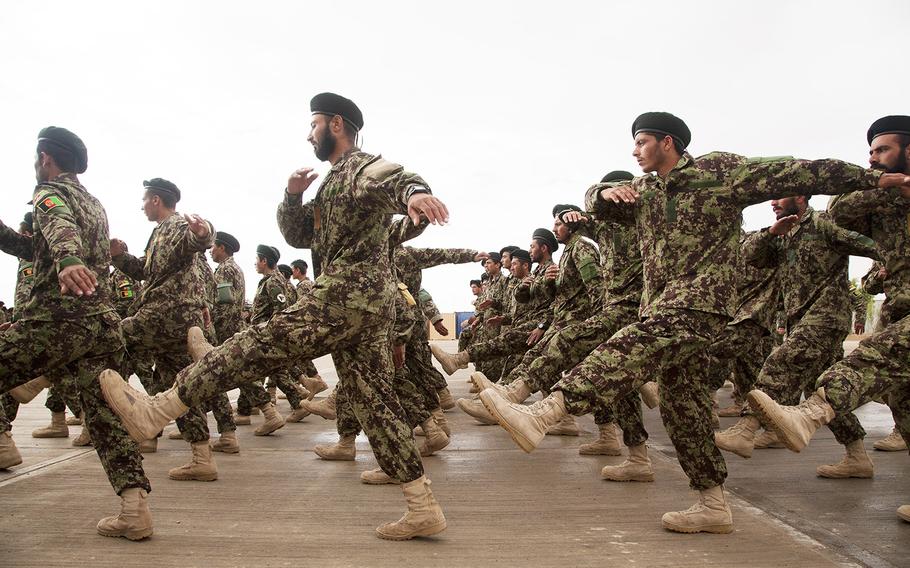 WASHINGTON — The Taliban has exploited widespread internal issues within the Afghan army’s 215th Corps to retake territory in Helmand Province and ramp up violence there recently in an attempt to control the upcoming poppy harvest, said U.S. Army Brig. Gen. Wilson A. Shoffner, a spokesman for NATO’s Resolute Support Mission.

Fighting in the southern Afghanistan province has remained constant since the United States officially ended its combat mission in the country in 2014. But the uptick in violence in recent weeks “was expected” as Taliban fighters attempt to control roads and smuggling networks just ahead of the poppy harvest, Shoffner said Thursday.

Attacks, such as the 11-hour Taliban offensive Wednesday in Gereshk that left eight insurgents and four police officers dead, are likely to continue through the end of the month when the harvest is expected to begin, the general said. The poppy trade is the Taliban’s largest source of income.

The United States has attempted to bolster its effort to revamp the 215th Corps, which has been plagued with leadership issues and desertions. Last month, about 100 soldiers from the Fort Drum, N.Y.-based 10th Mountain Division were deployed into Helmand to retrain the Afghans. So far, only two of the 215th Corps’ six battalion-sized units have been retrained under new leadership, and those efforts are not likely to be completed until mid-summer, Shoffner said.

“We’ve done everything we can to try and maximize the affect that we can have in our train, advise and assist efforts down in Helmand,” he said. “… We’re going to continue doing everything we can within our current authorities to train (Afghans) as smartly and efficiently as we can.”

Helmand was the site of some of the most brutal fighting between Taliban insurgents and coalition forces throughout Operation Enduring Freedom. Nearly 1,000 NATO troops, including hundreds of U.S. Marines, died in the province.

Since the United States withdrew its combat forces, the Taliban has driven much of the Afghan security forces out of portions of Helmand, including recently in the province’s north. The United States has largely blamed the 215th’s leadership for those losses.

The leadership issues, which range from ineffective management to corruption, in some cases have continued through the retraining initiative, Shoffner said. The Afghans are continuing to root out poor leaders, who were directly to blame for low morale among the Afghan forces, the general said.

“Good leaders make sure that their soldiers are paid on time, that they are fed on time, and they get leave,” he said. “What compounds the problem for the Afghan army in Helmand, is that most of the soldiers are from either the eastern part of Afghanistan or the north. They’re not from Helmand. So leave is really very important to them, and if soldiers don’t get leave they sometimes will just leave on their own.”

Pay has been another major issue for the 215th Corps, he said. Typically, the soldiers have been paid in cash. Some leaders have been known to pocket their soldiers’ money. Shoffner said the United States has encouraged the Afghans to move toward a direct deposit pay system, which would require all Afghan soldiers to have a bank account.

Meanwhile, the 215th’s soldiers continue to fight as they retrain.

“They’ve used Afghan special forces to mitigate that gap a little bit, but they’ve also repositions some forces from throughout Afghanistan into Helmand to help ease the pressure on 215th Corps,” Shoffner said.

The effectiveness of the corps’ retraining efforts, Shoffner said, would play a large part in the assessment that Gen. John “Mick” Nicholson, who became the top American commander in Afghanistan this month, is expected to provide to the White House within the next three months.

That assessment will help determine how many troops the United States will keep in Afghanistan beyond 2016, said Army Gen. Joseph L. Votel, who leads U.S. Special Operations Command and has been tapped to command U.S. Central Command. The United States plans to keep 9,800 troops in the country and draw down to 5,500 by 2017.

“If (Afghan forces) demonstrate uneven performance similar to the 2015 fighting season, and continue to struggle with their sustainment systems, it will be difficult to address those challenges” with the current plan,” Votel told the Senate Armed Service Committee on Wednesday.

“I absolutely support the conditions-based approach as we look through our force levels in Afghanistan,” Votel told lawmakers.