US soldiers in Poland take spotlight in Super Bowl ad 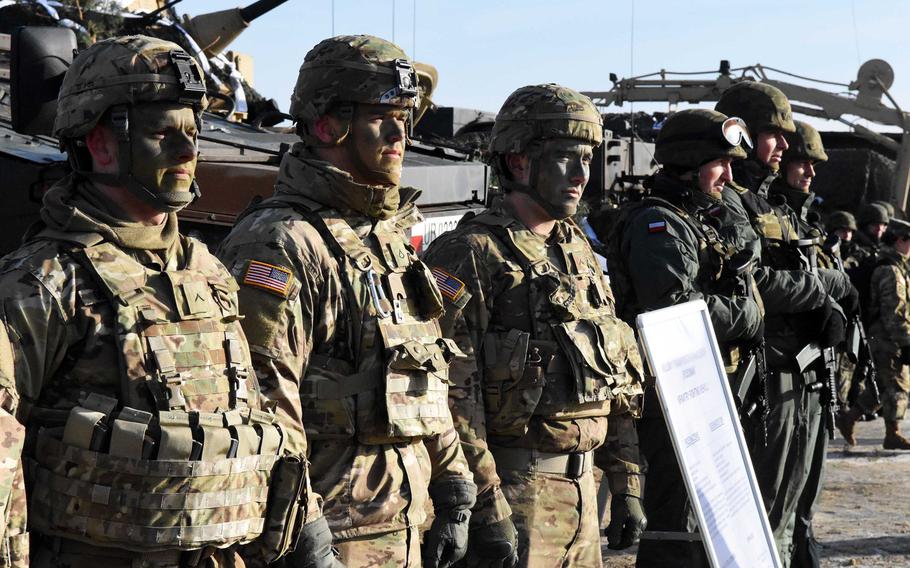 American and Polish soldiers in front of their vehicles at the live fire exercise in Zagan, Poland, on Monday, Jan. 30, 2017. (Martin Egnash/Stars and Stripes)

After the confetti fell on the Super Bowl champion New England Patriots, television watchers were transported to snow-swept Zagan, Poland, where hundreds of U.S. Army soldiers were enjoying the game.

The commercial for Hyundai automobiles, which turned out to be one of the most talked-about of the night, aired at the conclusion of the game and put a spotlight on soldiers separated from their families.

“Millions of people just watched the Super Bowl, which wouldn’t have been possible without our troops,” says the text that rolls over the opening aerial shot of the small Army compound in Poland, where soldiers with 3rd Brigade Armored Brigade Combat Team, 4th Infantry Division, are deployed for a nine-month mission. Then viewers are taken inside a large tent where cheering troops are gathered for the game, which is playing live on big screens.

At one point, Sgt. Richard Morrill is led away to a special room, where he is surrounded by huge screens. In an instant, the soldier’s wife and 4-year-old daughter appear on one of the screens, allowing the family to watch the game together.

“The hardest part of this deployment — I can’t explain it too well. Just that Daddy has to go to work again,” Morrill said.

Soldiers with the Fort Carson, Colo.-based 4th Infantry Division deployed to Poland in January, where for the next nine months they will be rotating from the Baltics in the north to Romania and Bulgaria in the south. The mission is part of a U.S. effort to deter potential Russian aggression.

For soldiers, the campaign means a long stretch away from family.

“Its tough for him to understand because he is used to me just being there,” Guerrero said of his 2-year-old-son.