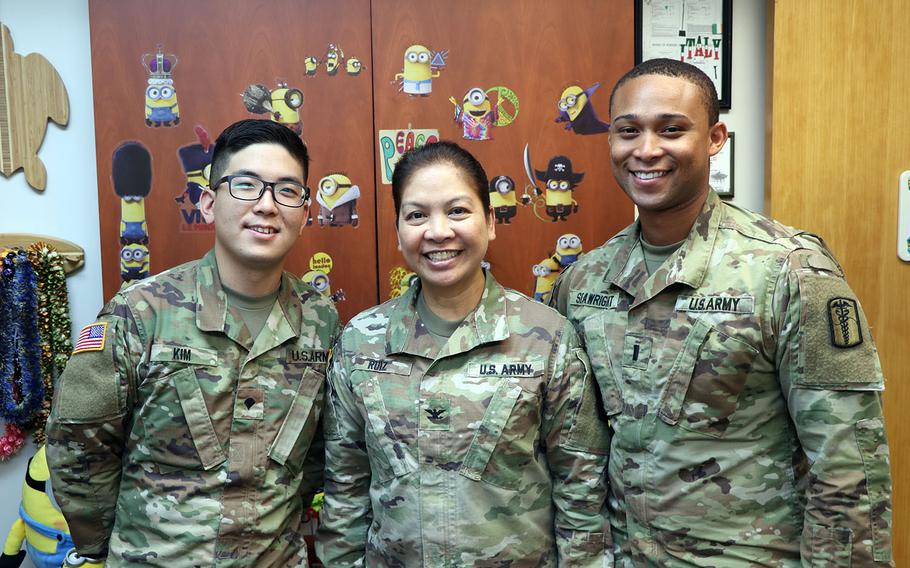 SEOUL, South Korea — Three American medical soldiers were in the “right place at the right time” on Friday the 13th.

Two Army nurses and a command driver were headed from the main U.S. military hospital at Yongsan Garrison in Seoul to a meeting at Camp Humphreys when they saw a woman injured in an accident on the highway near Osan, about 30 miles south of Seoul.

The trio, assigned to the Brian Allgood Army Community Hospital, stopped to help.

“We saw a lady get out of her car, trip and hit an incoming small truck, then she kind of rolled underneath,” Ruiz said Tuesday in a telephone interview. “I said, ‘oh my God, oh my God, we’ve got to help her.’”

Ruiz, 53, of Waipahu, Hawaii, said they found the woman face down and bleeding.

“My biggest fear was that she had a neck injury, so I told 1st Lt. Seawright to make sure her head was steady,” Ruiz said, adding her team didn’t have equipment with them so they mainly worked to stabilize the woman until the ambulance arrived.

“It took about 20 minutes for the ambulance to get there, because, of course, traffic was backed up,” she said.

Seawright, 27, of Swansea, S.C., said the woman was complaining of pain but was alert and able to speak. He said somebody on the scene gave them a gray blanket that they used as a pillow and to help stanch the bleeding.

The soldiers said they had discussed the fact that it was Friday the 13th beforehand and expressed hope that nothing would happen.

“We’re glad that by the grace of God we were in the right place at the right time,” Seawright said.

Police said the woman was about 65 years old and was taken to the nearby Ajou University Hospital, which specializes in trauma. Details about her condition were not available.

“Her family was thankful,” said Kim, 27, who is originally from Seoul but studied in the United States. “I also received a text from the highway patrol saying thank you for helping with the scene.”