US soldier from Alaska killed by indirect fire in Afghanistan 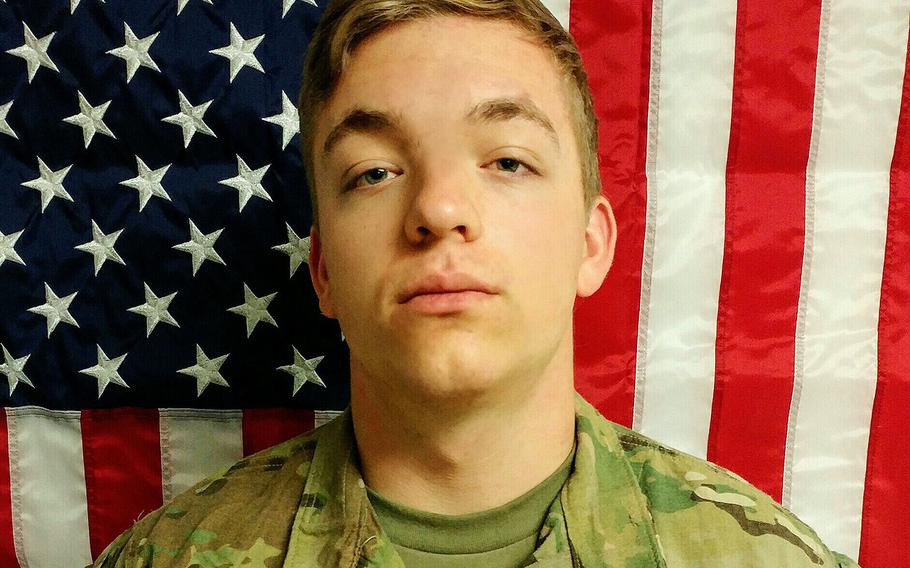 Pfc. Hansen B. Kirkpatrick was killed while conducting operations against the Taliban in Afghanistan's Helmand province. (U.S. Army)

Two other soldiers were injured in the attack during the operation in Helmand’s Nawa District, said Navy Capt. Jeff Davis, a Pentagon spokesman. The soldiers’ injuries were not believed to be life-threatening, he said.

The incident is under investigation, Davis said, but there are no indications of friendly fire or foul play by U.S. or Afghan forces.

Navy Capt. Bill Salvin, a spokesman for the U.S. military in Kabul, said the Taliban launched the indirect fire – typically an attack with mortar or rocket rounds – into a building used by soldiers during the mission.

Kirkpatrick was a mortarman who joined his unit about a year ago, according to Army Maj. James C. Bithorn, the executive officer for 1st Armored Division’s 1st Brigade. Bithorn described Kirkpatrick as “a caring, disciplined, and intelligent young soldier.”

Kirkpatrick deployed in January with about 1,500 soldiers from the brigade on a nine-month rotation to Afghanistan in support of the NATO-led mission to train, advise and assist Afghan security forces and the U.S. unilateral counterterrorism mission.

The brigade’s soldiers are serving in several areas across Afghanistan, including in Helmand in the country’s south where they are working alongside Marines to aid Afghan forces fighting the Taliban there.

Despite nearly 16 years of war, the Taliban has made inroads in several areas of the country. Helmand Province has seen some of the fiercest fighting in the last year, as the Taliban has attempted to push the Afghan government out of the province, which boasts vast poppy fields, the insurgent group’s primary source of income.

Heavy fighting in recent weeks has occurred in Nawa, just south of the provincial capital Lashkar Gah. Afghan media reported dozens of airstrikes and ground raids in recent days against the Taliban in the district. The Taliban has retained control of the district since October, according to the Long War Journal.

Kirkpatrick was the seventh U.S. servicemember killed in action in Afghanistan in 2017.

Three soldiers with the Army’s 101st Airborne Division were killed last month in Nangarhar province in the country’s eastern region. They were killed when an Afghan commando turned his gun on them. The Taliban claimed responsibility for that attack.

Two Army Rangers and a Green Beret were also killed in Nangarhar in April during operations against Islamic State militants.

“We will keep [Kirkpatrick’s] family in our thoughts and prayers as we reflect on the sacrifice he and others have made to secure our freedoms and help make Afghanistan a better place,” Army Gen. John Nicholson, the top U.S. commander in Afghanistan, said in a prepared statement.

The United States has about 8,400 troops deployed to Afghanistan. It could deploy up to 5,000 more as part of a strategy adjustment that Defense Secretary Jim Mattis said he will deliver to the White House this month.