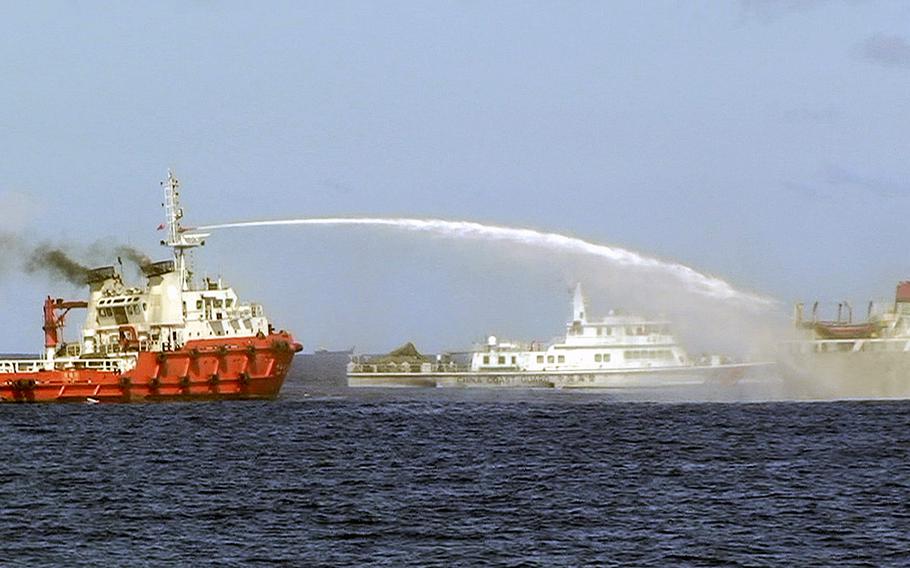 A Chinese ship, left, shoots a water cannon at a Vietnamese vessel, right, while a Chinese Coast Guard ship, center, sails alongside in the South China Sea, off Vietnam's coast, on Wednesday, May 7, 2014. (Vietnam Coast Guard/AP)

YOKOSUKA NAVAL BASE, Japan — A standoff between Chinese and Vietnamese ships in the South China Sea continued on Thursday, with both sides trading diplomatic barbs and the United States criticizing Beijing for provocative actions.

Chinese officials blamed Vietnam on Thursday for “disruptive activities” in waters claimed by both countries near the uninhabited Paracel Islands, the day after Vietnam released purported video of Chinese ships ramming Vietnamese vessels and spraying them with water cannons.

The dispute began when China announced on May 3 that it had moved the deep-water oil drilling rig Haiyang Shiyou 981 to within about 150 miles of the Vietnamese coast, and about 30 miles away from the Paracels.

Chinese officials said Thursday that the oil rig was within Chinese territorial waters. China claims the Paracels and about 90 percent of the South China Sea as its own, based largely on arguments of historical discovery. Most of China’s neighbors dispute that claim, based on international law.

Foreign Ministry spokeswoman Hua Chunying said the fleet of Vietnamese vessels at the scene “are in violation of China’s sovereign rights” at a press conference in Beijing on Thursday.

Vietnamese officials on Thursday maintained their claim on the Paracel Islands and its nearby waters, which Hanoi says are within its exclusive economic zone.

However, it is China’s aggressive response — involving a fleet of 80 vessels and seven naval warships, according to Vietnam — that has drawn the criticism of U.S. officials.

“(China’s) unilateral action appears to be part of a broader pattern of Chinese behavior to advance its claims over disputed territory in a manner that undermines peace and stability in the region,” State Department spokeswoman Jen Psaki said in a statement from Washington. “We are also very concerned about dangerous conduct and intimidation by vessels operating in this area.”

The Asia-based U.S. Navy 7th Fleet acknowledged the conflict, but struck a cautious tone on Thursday. Officials declined comment on whether the standoff had affected any naval missions.

“The role of the U.S. Navy forces in the Pacific is to promote security and stability, while also being prepared and ready to execute any missions at any time as directed by leadership,” the 7th Fleet released in a statement. “Any provocative or unilateral actions taken by one country could jeopardize the peace and security in the region.”

Last month, President Barack Obama visited Japan, Malaysia and the Philippines, all of whom have territorial disputes with China. Obama called upon Beijing to resolve its claims without “coercion and intimidation” during a press conference in Manila.

Hua told reporters Thursday in Beijing that the U.S. has no right to make unwarranted remarks on China’s sovereign rights and that drilling is “normal and legal,” according to The Associated Press.

China’s relationship with the U.S. military in the Asia-Pacific region has proven rocky in recent years. Chinese ships surrounded the surveillance ship USNS Impeccable in 2009 when it operated in international waters about 75 miles from China’s coastline. For years afterward, Navy officials accused China of shadowing 7th Fleet ships and blocking their passage.

In 2010 and 2011, China canceled military-to-military exchanges with the U.S. following scheduled arms deals with Taiwan.

However, it’s a slow-moving relationship compared to the ties that some Southeast Asian nations are building with Washington. The Philippines recently signed an accord that will allow U.S. military use of Philippine bases for 10 years. Last month, Vietnam conducted its first at-sea search-and-rescue mission with the USS McCain. The two nations have also been engaging in exercises since 2010.

“The complexity of [Naval Engagement Activity] Vietnam has increased in a measured, incremental way since this engagement began,” said Lt. Cmdr. Clay Doss, a spokesman for Commander Task Force 73 in Singapore. “We look forward to making next year’s NEA more complex in ways that will enhance our ability to operate with confidence in the maritime domain.”

It’s unlikely that Vietnam would move toward a Philippine-style agreement with the U.S. military forces, said Euan Graham, senior fellow with the Rajaratnum School of International Studies in Singapore.

However, “it would certainly add to the argument of those who would want to press for a closer relationship with the United States,” Graham said.

While the next moves in the China-Vietnam standoff are unpredictable, Graham notes that neither side wants to be the one that fires the first live round.

Both face unique pressures. Vietnam cannot accept oil drilling in what they perceive as their exclusive economic zone indefinitely; meanwhile, China is under pressure to deliver results for its deep water oil rig and unlikely to budge, Graham said.

“I think you don’t move a billion dollar rig into a drilling position and tow it out at the first sign of resistance,” Graham said.

Deploying it about 225 miles from its Hainan Island military bases may be the first step in wider deployments around the disputed sea, Graham added.