US servicemember killed in fighting in eastern Afghanistan 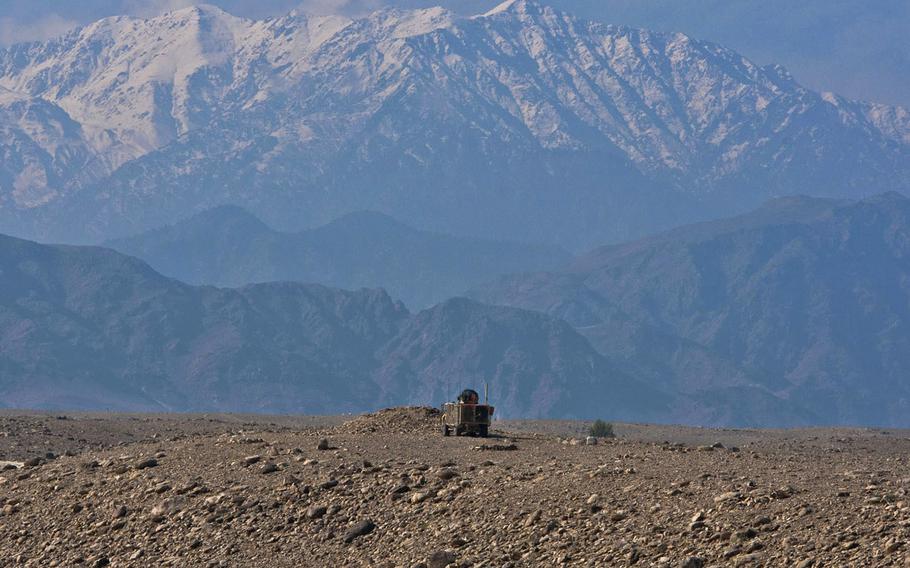 In a 2011 file photo, the mountains of Tora Bora loom over a lone U.S. mine resistant ambush protected vehicle as it patrols outside the Achin District Center. (U.S. Army)

KABUL, Afghanistan — A U.S. servicemember was killed and four were wounded on Monday in combat in eastern Nangarhar province, military officials said.

Two of the servicemembers injured in the incident, which occurred in Achin district, were being treated at a nearby hospital and were in stable condition, the military said in a statement Tuesday. The two others have returned to duty.

“We are deeply saddened by the loss of one of our own,” said Gen. John Nicholson, commander of U.S. Forces-Afghanistan. “Our heartfelt sympathies go out to the families and friends of our fallen and wounded brothers.”

The slain servicemember, the first U.S. combat fatality this year, was not officially identified. The Pentagon does not release the names of deceased servicemembers until next of kin have been notified.

"Sergeant First Class Mihail Golin served our nation with courage and distinction, and his death is a loss that will be felt across New Jersey," Booker said. "Let us honor Sergeant Golin's extraordinary courage by reflecting on his commitment to the nation he loved, and by recognizing the profound debt of gratitude we owe to him and to his family for their sacrifice."

U.S. forces have been backing the Afghan military in its fight against an Islamic State affiliate that has gained a foothold in eastern Afghanistan. U.S. officials had hoped by the end of last year to defeat the group, known as ISIS-Khorasan province, or ISIS-K. But the organization has proved to be a stubborn adversary.

U.S. support to the Afghan forces fighting ISIS-K is separate from its participation in the U.S.-led NATO Resolute Support mission, which turned 3 years old on Monday. That train-advise-assist mission began after the withdrawal of most combat forces from Afghanistan at the end of 2014.