US servicemember killed in Afghanistan 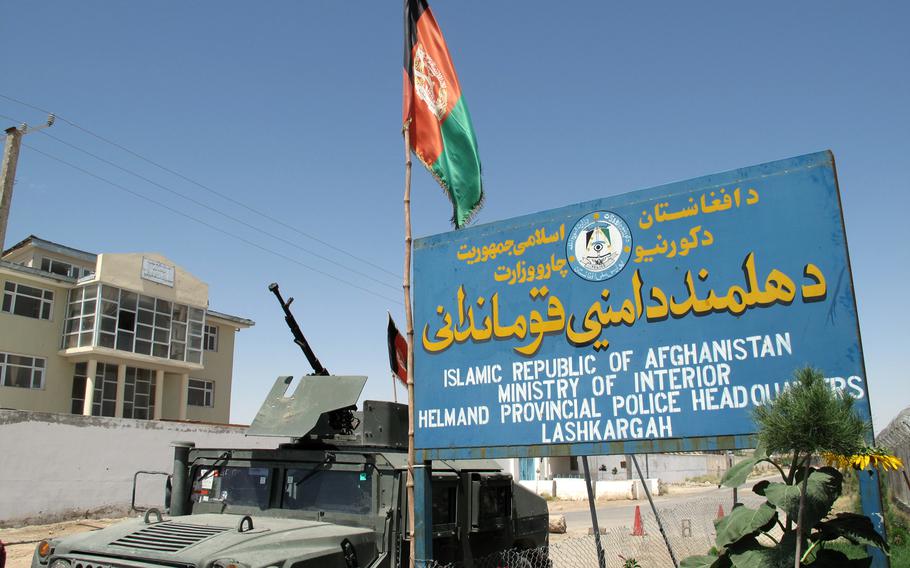 A Humvee sits parked next to the Helmand provincial police headquarters sign in Lashkar Gah, Afghanistan, in this file photo from July 2, 2012. A suicide car bombing on Monday killed 14 people, including 10 Afghan police officers, as the Taliban launched a large-scale attack on the capital in southern Helmand province, the heartland of the insurgency. (Benjamin Barr/U.S. Marine Corps)

WASHINGTON – An American servicemember was killed and one other was injured Tuesday just a day after the U.S. said it sent troops to aid Afghan forces in its fight against the Taliban in southern Afghanistan.

About 100 additional U.S. troops were dispatched to Lashkar Gah, the capital city of Helmand province to help Afghan police secure the city from Taliban forces surrounding it.

Six Afghans were also injured, according to a statement from Resolute Support, the NATO-led mission in Afghanistan.

“On behalf of all of U.S. Forces – Afghanistan, as well as Resolute Support, our deepest sympathies go out to the families and friends of those involved,” said Gen. John W. Nicholson, commander of U.S. forces in Afghanistan and Resolute Support. “We are deeply saddened by this loss, but remain committed to helping our Afghan partners provide a brighter future for themselves and their children.”

The U.S. forces were on a foot patrol with Afghan troops near Lashkar Gah when they hit an improvised explosive device, according to Col. Michael Lawhorn, the Kabul-based spokesman for Operation Inherent Resolve.

The identity of the killed servicemember was being withheld pending notification the family.

The servicemember is the third American to die in Afghanistan this year, and the second in Helmand.

Staff Sgt. Christopher A. Wilbur, 36, of Granite City, Ill., died Aug. 12 in Kandahar from a non-combat-related injury. The cause of death was not released and the Pentagon said at the time that the incident was under investigation.

In January, Army Staff Sgt. Matthew Q. McClintock, 30, a Special Forces engineer originally of Albuquerque, N.M., was killed during a firefight in the Marjah district of Helmand province.

Since U.S. Forces in Afghanistan formally ended its combat mission in December 2014, 23 U.S. servicemembers have died in Afghanistan and 118 have been wounded, according to the Defense Department

The servicemember killed Tuesday was not part of the 100 troops sent to Lashkar Gah, Lawhorn said.

Omar Zwak, spokesman for the provincial governor in Helmand, said U.S. forces have been carrying out operations with Afghans in the Chah Anjir area of Nad-e-Ali district and the Babaji area, which is close to Lashkar Gah. However, Zwak said he did not know whether it was in either of these areas where the IED blast occurred.

An investigation is being conducted to determine the exact circumstances of the event, according to the Resolute Support statement.

In February, the Army deployed a battalion-sized unit to help train and advise Afghan units facing a particularly virulent uprising in the province.

Helmand has been the site of some of the most intense fighting in the 15-year war in Afghanistan. Nearly 1,000 foreign troops have died fighting to secure the province since 2001.

The Taliban’s goal is to take a major urban center, Brig. Gen. Charles Cleveland, a Resolute Support spokesman, told reporters Monday. The Taliban will continue to “do their best” to threaten the provincial capitals in Kunduz and Helmand, he said.