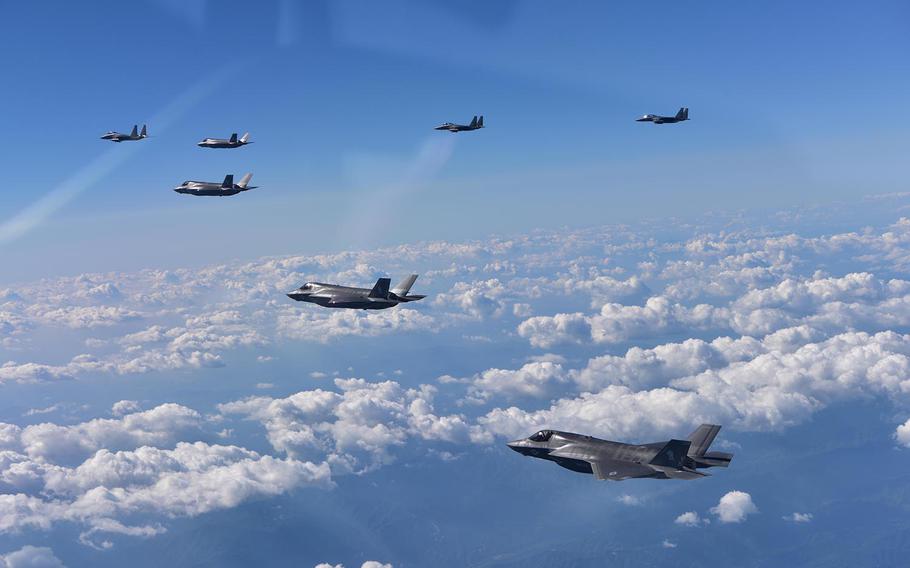 SEOUL, South Korea — Two U.S. supersonic bombers and four stealth jets soared over the Korean Peninsula on Thursday in a powerful display of military might after North Korea fired a missile over Japan and renewed a threat to target the waters near Guam.

The aircraft also conducted precision strike drills over the Pilsung range in a mountainous area of South Korea in an unprecedented combined maneuver.

In unusually blunt language, Gen. Vincent Brooks, the commander of U.S. Forces Korea, said the flyover was a “show of force” in response to North Korea’s missile test on Tuesday.

He also said the United States did not deploy the bombers during joint war games with South Korea that ended Thursday in “hopes that the reduced scale would send a positive signal to North Korea and the region.”

But, he said, the North had responded with provocations, including conducting two missile tests and staging an exercise simulating a raid on South Korean islands.

“Apparently the changes in the exercise did not matter,” he said in a statement.

Tensions over North Korea’s nuclear weapons program have spiked this summer as the communist state traded threats with President Donald Trump and test-fired several missiles, including one that flew over Japan on Tuesday.

Secretary of State Rex Tillerson, backed by military commanders has expressed hope that diplomacy and economic sanctions would bring North Korea to the negotiating table.

But Trump said Wednesday that “talking is not the answer” when it comes to North Korea, which has defiantly persisted with its efforts to develop a nuclear missile that could hit the U.S. mainland.

On Thursday, Washington and Seoul also wrapped up nearly two weeks of joint war games that always anger Pyongyang, which considers them a rehearsal for an invasion.

The pair of B-1B Lancers from Andersen Air Force Base, Guam, and a squadron of F-35B stealth jets from Marine Corps Air Station Iwakuni, Japan, were joined by four South Korean fighter jets, according to the U.S. Pacific Command.

It said the U.S. bombers flew with the Marines’ “newest and most advanced fighter” for the first time, adding the mission was “conducted in direct response” to North Korea’s latest missile test.

The 10-hour mission began with a joint flight with Japanese fighter jets over waters near Kyushu, Japan, in a bid to show solidarity with the two staunch U.S. allies.

“North Korea’s actions are a threat to our allies, partners and homeland, and their destabilizing actions will be met accordingly,” Gen. Terrence J. O’Shaughnessy said.

The Pacific Air Forces commander just returned from an unscheduled visit to Japan to meet with his counterparts.

The communist state has conducted dozens of missile tests, including 13 this year, with many of them fired at a lofted angle to avoid neighboring territories.

South Korea’s Defense Ministry said in a report to the National Assembly that Tuesday’s launch was conducted at a “normal” angle but at half-range.

That would mean it could have traveled up to 3,100 miles, which would put it in reach of Guam and other regional targets.

North Korea said the missile was an intermediate-range Hwasong-12, which it had successfully tested in May and has threatened to launch into the ocean near Guam. Leader Kim Jong Un called it a “prelude” to containing U.S. military bases on the island and called for more launches targeting the Pacific, the state-run Korean Central News Agency reported on Wednesday.

South Korean officials said the missile traveled more than 1,677 miles and reached a maximum altitude of 342 miles as it flew over the Japanese island of Hokkaido. Japanese officials said it broke into three pieces before falling into the Pacific.

Vice Defense Minister Suh Choo-suk said it’s too early to tell if the missile succeeded in re-entering the atmosphere, and he declined to confirm reports that the missile broke into three pieces in a terminal phase failure.

“We have not reached a conclusion” on the issue yet,” he told lawmakers, according to the Yonhap News Agency. “Painstaking verification is necessary for this part.”

Experts are divided on how close North Korea is to reaching its stated goal of being able to hit the U.S. mainland with a nuclear missile since the communist state would need to miniaturize a warhead that could fit on the missile and master re-entry technology to enable it to hit its target.