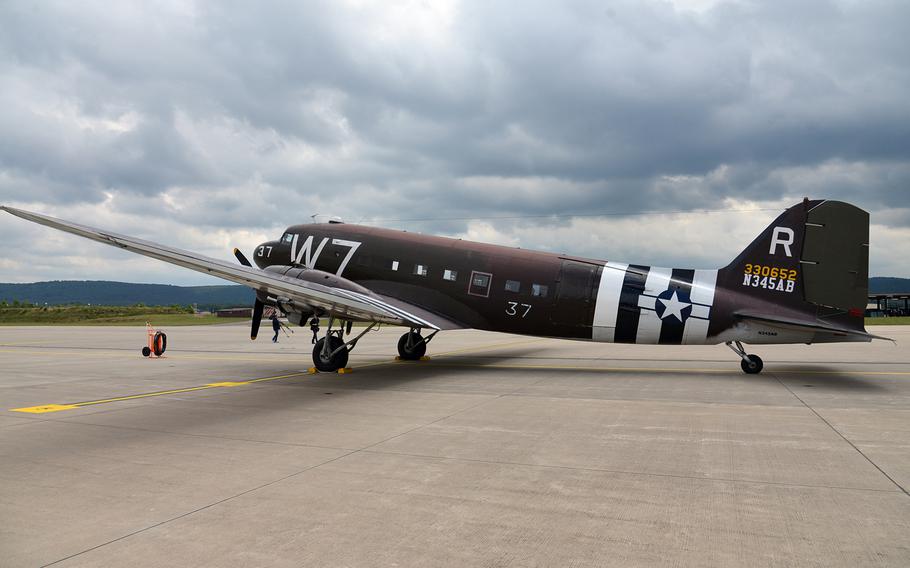 Except for the large serial numbers needed to fly over today's Europe, the markings on Whiskey 7, a vintage C-47, are like the ones used when it flew on D-Day, carrying paratroops of the 82nd Airborne Brigade. The plane flew from the United States to Europe and made a stop at Ramstein Air Base, on its way to Normandy for the 70th anniversary commemorations of the D-Day invasion. (Michael Abrams/Stars and Stripes)

KAISERSLAUTERN, Germany — In what has come to be something of a tradition this time of year, the American military is again preparing to invade Normandy.

The U.S. is sending roughly 650 troops from across the U.S. and Europe to take part in more than two dozen events commemorating the 70th anniversary of D-Day, the start of the Allied invasion that led to Germany’s defeat in World War II.

Soldiers from at least eight U.S.-based units will serve as color guards and speakers at commemorations in towns and places that their predecessors fought in or liberated in the early days of the Allied invasion, according to U.S. European Command. Among the stateside units represented are the 82nd and 101st Airborne divisions; the 75th Ranger Regiment; the 1st, 4th and 29th Infantry divisions; the 1st Battalion, 507th Parachute Infantry Regiment; and 4th Brigade, 25th Infantry Division, which traces its lineage back to the 1st Battalion, 501st Parachute Infantry Regiment.

Troops from some of those units and others from Europe will re-enact one of the most heroic and harrowing events of the invasion: parachuting out of planes in a massive, multinational jump on June 8.

Local villages and organizations will stage hundreds of events before and after that, from fireworks and movie screenings to concerts and parades.

The U.S. military is sending troops to just a few dozen of these events, the biggest of them a ceremony June 6 at the Normandy American Cemetery, where almost 11,000 American dead and missing are memorialized, to honor the Americans who fought and died in the Normandy campaign. Some 200 American servicemembers will take part in the ceremony, including an honor guard from the Europe-based 529th Military Police salute battery, paratroops from the 173rd Airborne Brigade Combat Team and a flight of F-15s, which will fly in a missing man formation.

“We’ll have flyovers on a lot of the ceremonies,” U.S. European Command spokesman John Tomassi said. “Not every one, but I would say a good majority of them.”

U.S. participation in many of the events will be modest, though the units attending will have symbolic significance. In one, about 25 soldiers from the 82nd Airborne Division will attend a ceremony at a memorial honoring Pfc. Charles DeGlopper, an 82nd soldier who died in the battle to take La Fière Bridge and was posthumously awarded the Medal of Honor.

Army Rangers will again stand at Pointe du Hoc, where their predecessors scaled the cliffs to seize the high ground where German forces had huge gun emplacements. In Colleville-sur-Mer, where there is a large monument to the 1st Infantry Division, soldiers of the Big Red One will join locals in paying their respects. The 101st will have soldiers in Chef du Pont, where it was once tasked with seizing a strategic bridge.

U.S. European Command doesn’t yet have a final list of events in Normandy where American forces will be present in an official capacity, but a preliminary list is available on its website, www.eucom.mil. An even more comprehensive calendar of events is available at dday-overlord.com, a nonprofit organization.