US seeks to allay German fears about anthrax 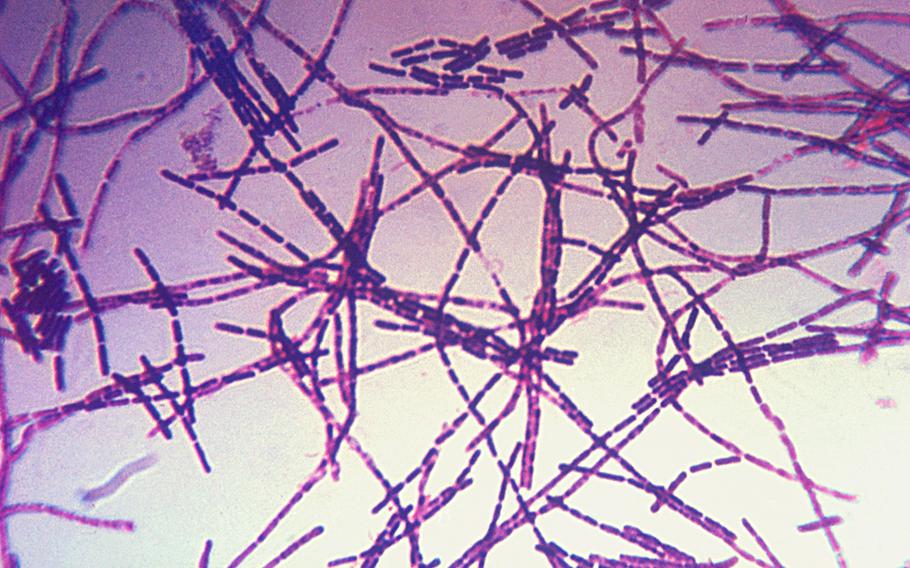 KAISERSLAUTERN, Germany — German state and local politicians have been seeking answers from the U.S. military following German news reports that the United States sent several samples of possibly live anthrax to an Army lab in Germany for military exercises several years ago.

Only one sample of anthrax was sent to Germany, the Pentagon said. It was never used and destroyed two years ago, officials said.

The anthrax was believed to have been dead when shipped 10 years ago, but there’s a chance it may have contained low concentrations of live spores, since it came from a production batch in Utah that was found to be able to grow bacteria during testing, a Pentagon spokesman said.

The news that the Army’s public health laboratory in Landstuhl could have possibly received live anthrax comes about two months after DOD announced that dozens of private and federal labs and some foreign countries were mistakenly shipped live anthrax by the Dugway Proving Ground in Utah, an Army research and test facility. An investigation into how those errors occurred revealed that U.S. military units in Germany may have also received live anthrax, one of now seven foreign countries on the department’s growing list of those affected.

Maj. Eric Badger, a Pentagon spokesman, said workers at the Army laboratory on Landstuhl — located on the same post with Landstuhl Regional Medical Center — said, to their knowledge, the vial containing the bacteria was never opened.

“It is important to note that there were no cases of infection related to this sample, and there was no health risk to laboratory personnel, hospital patients or visitors, or the general public in Germany,” Badger wrote in an email. “The sample was properly transported and stored the entire time, prior to its destruction in July 2013.”

Still, the news that a U.S. Army lab in Germany may have handled live anthrax — a bacteria that can be deadly to humans and can persist in soil for hundreds of years in environmental extremes — raised the hackles of German politicians, who did not know that Germany may have potentially received live anthrax spores. Most seemed to have learned of it from German media reports, rather than U.S. military or government officials.

“I was very concerned and irritated,” Landstuhl Mayor Peter Degenhardt said, after reading the Bild report.

Degenhardt’s concerns were allayed somewhat when he toured the Army lab with U.S. Army Garrison Rheinland-Pfalz Commander Col. G. Shawn Wells Jr. on Thursday. The mayor said he was assured the lab would never handle anthrax again. The lab, he was told, mainly deals with analysis of drinking water samples and environmental pollutants.

In Weilerbach, where the U.S. is planning to build a multimillion dollar military hospital, the town’s mayor, Anja Pfeiffer, said local residents deserve answers on what happened and how. “Especially in view of the new U.S. hospital in Weilerbach, it would be important for the people of the Weilerbach community that the incident is fully cleared up.”

Badger, the Pentagon spokesman, said the sample sent to the Landstuhl lab was to be used in conjunction with a tool designed to detect biological agents, to see if it could identify the anthrax. The tool was discontinued in 2013, and the anthrax was subsequently destroyed, he said.

“We have no records of any further shipment” of anthrax to that lab, Badger said.

Badger said the Army lab on Landstuhl does not handle other biological agents and toxins for exercises.

For now, no DOD labs will handle dead anthrax, either, he said.

Until the department “completely understands the root cause of this issue and has implemented recommended changes to procedures to ensure this does not happen again,” Badger said, adding that DOD “labs will not resume work with or ship inactivated anthrax, other than for testing purposes related to the current situation.”