US seeks expanded military agreement with Ghana, quashes talk of a new AFRICOM base 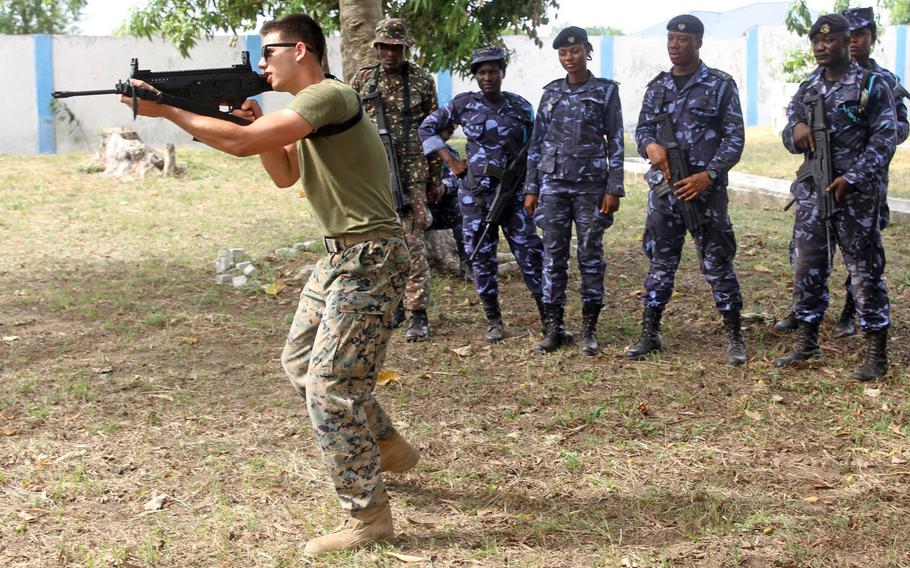 A U.S. Marine demonstrates an alert posture to members of the Ghanaian Revenue Authority Customs Division and Ghana Immigration Services during weapons handling instruction in Kpetoe, Ghana, March 22, 2017. The U.S. wants to update its status of forces agreement with Ghana, but there are no plans to establish an American-run military base there, U.S. officials said. (Monica Witt/U.S. Marine Corps)

STUTTGART, Germany — The U.S. wants to update its status of forces agreement with Ghana, but there are no plans to establish an American-run military base in that country, U.S. officials said.

On Tuesday, numerous local reports out of Ghana said the U.S. was in negotiations to set up a new U.S. Africa Command base, an issue that has long been a sensitive topic in many parts of Africa.

Instead, the U.S. is seeking an agreement that will allow more visiting troops as training programs and missions in the country expand, according to the U.S. embassy in Ghana.

“The current Status of Forces Agreement (SOFA) between the United States of America and the Republic of Ghana is approximately 20 years old,” said an embassy statement. “It does not cover the current range and volume of bilateral exercises and assistance.”

On social media there was a flurry of talk and speculation about U.S. intentions in Ghana, underscoring the lingering suspicion that AFRICOM intends to establish permanent bases.

“The United States and Ghana are planning joint security exercises in 2018, which require access to Ghanaian bases by U.S. participants and those from other nations when included,” the U.S. embassy said, adding that the U.S. will invest more than $20 million in training and equipment for the Ghanaian armed forces in the coming year.

For years, AFRICOM and the location of its headquarters has been a major topic of interest in Africa, where American commanders are routinely questioned about why the headquarters is in Germany.

Ten years after being formed, questions persist about its headquarters and whether it would be better to move the command’s 1,500 personnel along with their spouses and children to Africa.

AFRICOM commander Gen. Thomas Waldhauser, during Senate testimony earlier this month, was asked by lawmakers whether it makes sense to revisit the idea. The costs of relocation and potential diplomatic fallout make such a relocation unlikely, he said.

Meanwhile, what has emerged in Africa is a range of small outposts.

In the wake of the 2012 attack on a U.S. diplomatic facility in Libya, the military moved to set up barebones launch areas for quick-reaction troops and places for rotating forces to set up shop. Ghana, Senegal and Gabon and others have hosted the roughly 12 such sites in Africa, AFRICOM officials have said.

AFRICOM’s main anchor in Africa remains Camp Lemonnier in Djibouti, which is intended to be an enduring base. But as the military expands its mission in Africa—there are currently some 7,200 personnel in Africa on any given day-- Niger has emerged as a second hub of operations in the west. Work on a new drone site in Agadez, Niger, is expected to be completed later this year.