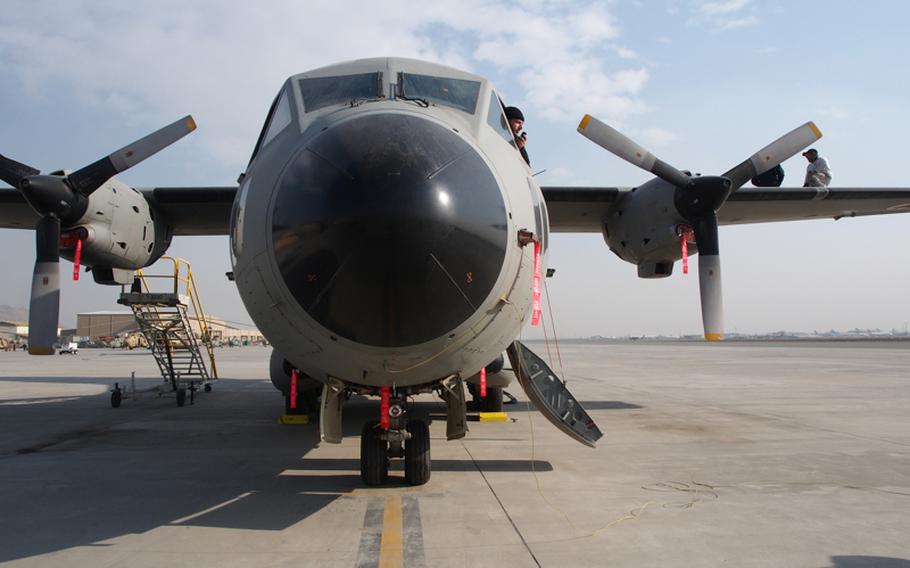 Maintenance workers inspect an Afghan Air Force C-27A Monday at Kabul International Airport. The entire fleet was grounded in December 2011 due to maintenance issues that still haven&#39;t been resolved. (Heath Druzin/Stars and Stripes)

Maintenance workers inspect an Afghan Air Force C-27A Monday at Kabul International Airport. The entire fleet was grounded in December 2011 due to maintenance issues that still haven&#39;t been resolved. (Heath Druzin/Stars and Stripes) 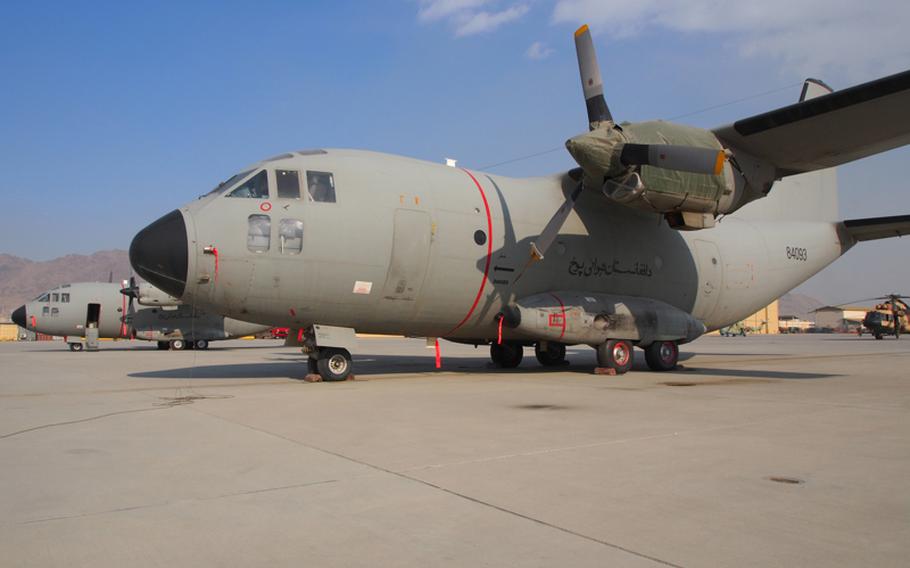 A C-27A sits on a ramp at Kabul International Airport. All 16 Afghan Air Force C-27As were grounded in December 2011 due to maintenance issues and most of the fleet is still grounded. (Heath Druzin/Stars and Stripes) Afghan Air Force cadets march during training in March 2011. Over the past year pilots in the nascent air force have missed out on countless hours of flight time due much of its fleet of cargo planes being grounded due to maintenance issues. (Heath Druzin/Stars and Stripes)

U.S. and Afghan officials told the paper that the Afghan military isn&rsquo;t expected to have an independent and fully functioning air force until around 2017, well after the withdrawal of most U.S. and international troops.

On the west end of Kabul International Airport, twin-engine C-27As sit side by side, sunlight reflecting off their gray wings and the green, black, and red of the Afghan flag emblazoned on their tails. For more than a year, though, most of the planes had been little more than expensive aviation exhibitions, unable to fly due to lack of spare parts and maintenance.

Now, despite spending nearly $600 million on the program, the U.S. is canceling the contract for the aircraft and disposing of all 16 planes delivered to the Afghan Air Force, the Journal reported.

Alenia Aermacchi North America, a unit of Italian defense conglomerate Finmeccanica SpA, failed to meet the requirements of their contract to maintain the fleet, according to an email from U.S. Air Force spokesman Ed Gulick, who was quoted in the Journal.

&ldquo;This decision comes after failed attempts by the contractor to generate a sufficient number of fully mission-capable aircraft that would provide an effective airlift capability for the AAF,&rdquo; Gulick said in the email.

An Alenia representative was quoted in the Journal as saying the company had not received word of the decision and that the program had recently shown improvement.

&ldquo;It&rsquo;s all a bit surprising that this decision is being made now when the [remediation] plan is being fully implemented,&rdquo; the representative said.

The entire fleet of C-27As was grounded in December 2011 and even recently only four to six planes have been able to operate at any one time, Afghan Air Force spokesman Col. Mohammad Bahadur said in an interview with Stars and Stripes.

&ldquo;The basic problem is that these airplanes were purchased without spare parts,&rdquo; Bahadur said. &ldquo;For a small part, you need to wait for weeks or months.&rdquo;

For the Afghan military, still struggling to operate independently, the lack of cargo aircraft has been a blow to an already shaky logistics system. The Afghan security forces have leaned heavily on their fleet of Russian helicopters and Cessna 208 planes. But those aircraft struggle to keep up with demand, especially on longer routes, such as the roughly 300-mile haul between the capital and Kandahar, Afghanistan&rsquo;s second city and still a major center for fighting.

Shortages of fuel and parts are epidemic for Afghan troops, whose Humvees and pickups often lie dormant for days; many units complain of a shortage of ammunition.

The U.S. is set to deliver four C-130s, four-engine cargo planes that are the workhorses of the U.S. Air Force, to the Afghan Air Force in 2013, said Ministry of Defense spokesman Gen. Zahir Azimi said in an interview with Stars and Stripes.

&ldquo;A military that doesn&rsquo;t have a plane is like a man without legs,&rdquo; Azimi said.

Stars and Stripes&rsquo; Heath Druzin and Zubair Babakarkhail contributed to this report.