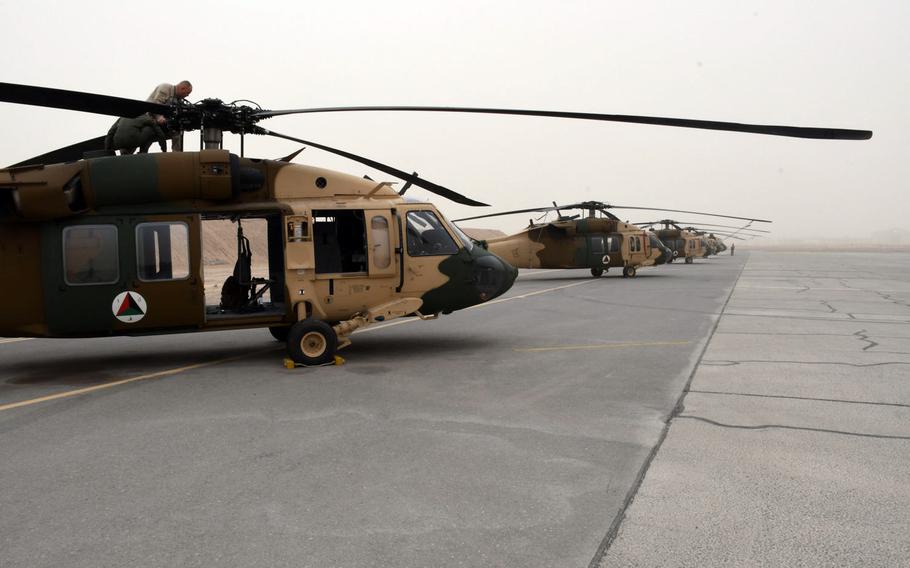 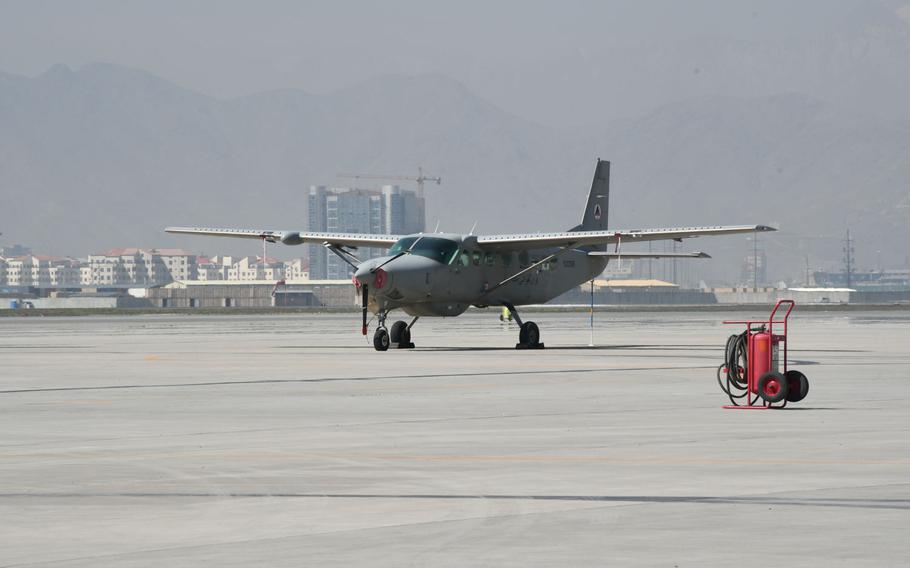 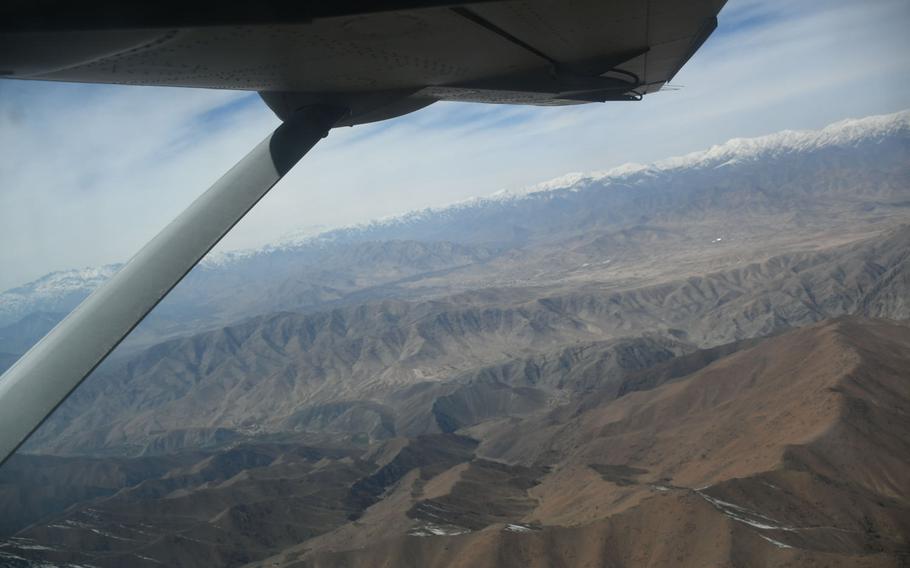 Buy Photo
An Afghan air force Cessna 208 Caravan flies between Kabul and Kandahar on Saturday, March 17, 2018. U.S. forces are pushing the Afghans to use the C208 for more tasks, but they?ve been hesitant to choose the plane over more familiar, Russian-made Mi-17 helicopters. (Phillip Walter Wellman/Stars and Stripes) 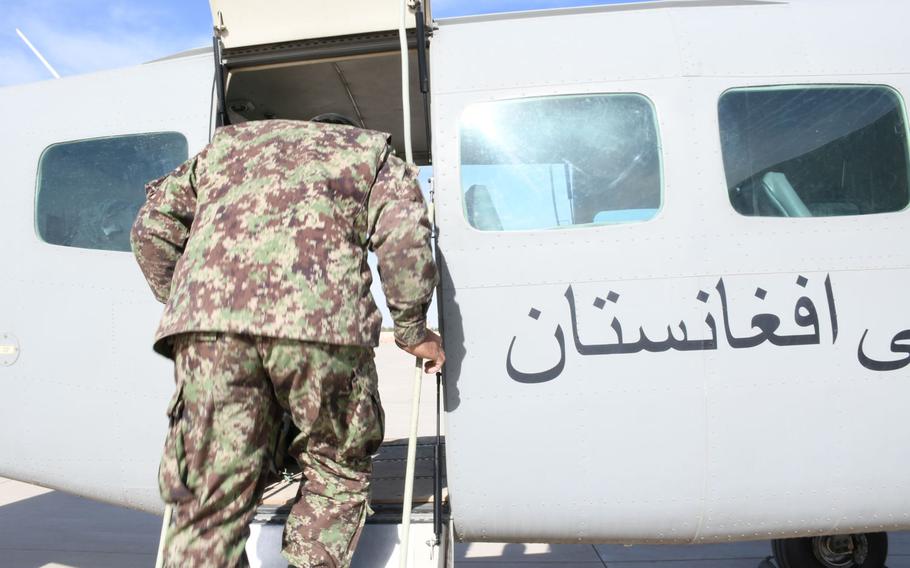 KANDAHAR AIR FIELD, Afghanistan — The Afghan air force is trying to get up to speed on its newly delivered Black Hawks because sanctions against Russia mean the Afghans can't get spare parts to keep their Russian-built helicopters flying.

Russian Mi-17 helicopters form the backbone of Afghanistan’s air force. Afghan airmen are so familiar with the Mi-17 that they need very little international advice to use them effectively.

However, because the U.S. supports the Afghan military financially, the Russian helicopters won’t be getting fixed much longer.

Sanctions against Russian arms manufacturers have made servicing the Mi-17 fleet increasingly difficult, the U.S. military says, and that means the Russian helicopters are unlikely to remain sustainable beyond next year.

Afghanistan’s ability to transport troops and supplies would drop without viable helicopter squadrons, crippling its fight against insurgents and its goal of operating with less support from allies.

Afghanistan received its first Black Hawks six months ago. Since then, 11 have been delivered, with a total of 159 expected to arrive by 2024. The aircraft are former U.S. military UH-60A models upgraded to a more powerful UH-60A+ variant.

Plans are now on course for 16 pilots and 16 enlisted aircrew to finish the Black Hawk mission qualification program in May. The goal is to have eight crews of four — two pilots and two enlisted aircrew — operating during this year’s fighting season, which begins in the spring. They’ll be based at Kandahar Air Field and be used for operations in Kandahar and Helmand province, officials said, preforming the same functions as the Mi-17.

So far, “the transition has been phenomenal,” said Air Force Col. Armando Fiterre, commander of the 738th Air Expeditionary Advisory Group, which trains and advises the Afghan air force at Kandahar Air Field. “Afghans are great fighters and they have taken to the UH-60 likes ducks to water.”

Critics have called the Black Hawk transition politically motivated and said that it could hurt Afghan forces in the short term as they fight the Taliban and other groups.

Fiterre played down those concerns.

“The political reality is that the Russian supply system is not keeping up with the demand of what we need,” he said. “I’m not here to bash the Mi-17. It’s a great helicopter. It can be the best helicopter in the world, but if you can’t sustain it, it does you no good.

Rogers said they can fit five of the more compact Black Hawks, meaning they can launch more independent missions at once.

The Black Hawk “gives you greater flexibility in the battlespace, so I can move troops faster, I can move more troops in a bigger lift package,” Rogers said. “It’s going to be a greater capability for the Afghan military.”

And because the Black Hawk doesn’t have to be sent to Russia for major maintenance like the Mi-17, “it’s much easier to keep it flying in the field,” Rogers added.

However, there is a learning curve for the new pilots and crews. U.S. officials at Kandahar told Stars and Stripes that some former Mi-17 pilots were finding it “hard to break habits” acquired during years of flying Russian helicopters. They said English, which is needed to understand the technical manuals, remains a hurdle for some trainees as well.

The Black Hawk isn’t the only aircraft able to take over traditional Mi-17 functions. The American-made Cessna 208 Caravan has been part of the Afghan air force for a number of years and U.S. advisers are encouraging the Afghans to do more with it.

“We’re working really hard on that aircraft to get it to a more effective and useful force,” Lt. Col. Marcus Jackson, the 441st Air Expeditionary Advisory Squadron commander, said of the C208. “They are very set in their mindset that rotary wing is always the answer, and this is just a new capability that they have to grow into.”

Afghan C208 pilot Capt. Naween, who is training to be become an aircraft commander, said, “of course air airdrop is useful. We can supply ammunition, water, food, everything.” But despite hours of practice, he’s never been asked to do those things during an actual operation.

U.S. officials hope that will change as time runs out on the Mi-17’s sustainability.

As Afghanistan receives more Black Hawks and more Afghans are trained on the aircraft, squadrons will be established at bases across the country.

But for now, Fiterre said the focus is creating a smooth “cultural shift” from Russian to U.S. aircraft.

“It’s an actual training and skills set change that needs to occur,” he said. “It’s a cultural change.”