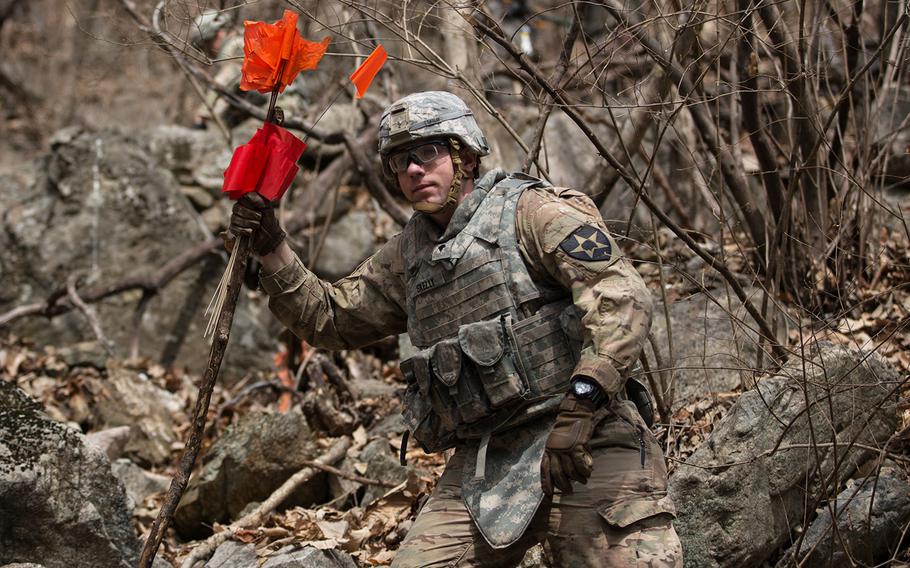 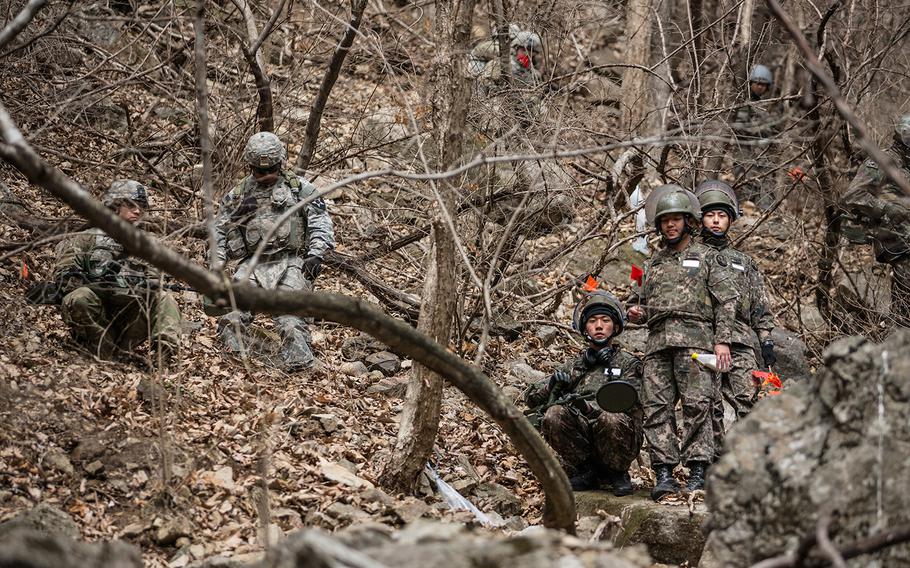 POCHEON, South Korea — U.S. and South Korean forces discovered seven pieces of ordnance, including a mortar and a sabot penetrating round, at a village outside of Rodriguez Live Fire Range during an unprecedented cleanup operation last week, Army officials said.

The four-day cleanup, which wrapped up on Friday, was in response to a series of incidents of stray rounds and fires at the training range that raised concerns and protests from local residents.

Then-Eighth Army commander Lt. Gen. Thomas Vandal apologized during a November townhall meeting in Pocheon, vowing to improve safety at the range, which is near the border with North Korea.

“There’s a total of seven [sites] that were reported by the people of Pocheon as suspected [unexploded ordnance] areas,” Capt. Derek Whipkey, commander of the 718th Ordnance Company (EOD), told Stars and Stripes at the excavation site Thursday.

The soldiers from the 11th Engineer Battalion and 718th EOD assisted their South Korean counterparts in clearing the first two sites near a cattle farm about two miles from the range, using ground-penetrating radar to map the locations and confirm any Korean hits.

“To my knowledge nothing like this has ever been conducted here in any recent history,” Whipkey said, referring to the use of U.S. assets to dispose of ordnance outside the range.

Eighth Army spokesman Christina Wright also said they brought in experts from the U.S. Army Armament Research, Development and Engineering Center to use computers to model potential faults at the range and minimize the amount of future stray rounds.

“16 foot berms have been constructed behind .50 [caliber] targets and all targets that were previously up on the mountain have been removed to ensure no vehicle can fire at them,” she said.

Whipkey said they won’t know how old the discovered pieces are or where they are from until forensics are complete, but he noted the materials found were heavily corroded and degraded.

The cleanup effort will continue at five more sites, but Whipkey said no timeline has been set.

The 3,390-acre complex is the Army’s premier training site on the Korean Peninsula, and is one of the few places troops have space to maneuver and train with live munitions.