US, S. Korean soldiers get medals for helping to rescue N. Korean defector 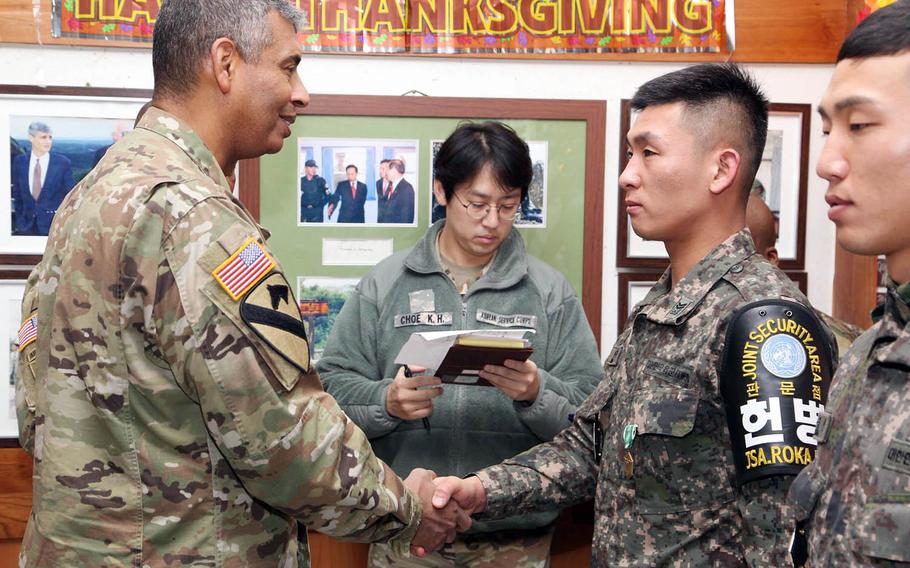 SEOUL, South Korea — Six U.S. and South Korean soldiers were awarded medals Thursday for helping to rescue a North Korean defector who made a daring escape across the border that divides the peninsula.

The fleeing soldier was severely wounded on Nov. 13 as other North Korean troops opened fire to try to stop him as he ran onto the South Korean side of the Joint Security Area, then collapsed.

Two South Korea soldiers who are part of the JSA security battalion crawled across the leaf-strewn ground to recover him, then dragged him to safety as other members of the battalion monitored the situation.

Gen. Vincent Brooks, head of United Nations Command and U.S. Forces Korea, awarded the soldiers an Army commendation medal “in recognition for their efforts” in rescuing the defector, during a ceremony at Camp Bonifas, a statement said.

“Your actions resulted in saving the defector’s life and de-escalating an incident that threatened the 64-year-old armistice,” the citation said.

The ceremony took place as troops prepared to enjoy Thanksgiving dinner at the base’s dining facility.

The movie-like scene was captured on closed-circuit television footage released Wednesday by the U.S.-led UNC that oversees the area.

The UNC said the North Koreans violated the armistice that ended the 1950-53 Korean War by shooting across the border and in one case temporarily crossing it physically.

The defector remains hospitalized, although doctors said he has regained consciousness and is on the road to recovery.

More than 30,000 North Koreans have defected to the South since the war ended, but it’s extremely rare for soldiers to try to cross through the Demilitarized Zone, a 2.5-mile wide, 150-mile-long strip of land that’s lined with barbed wire and dotted with landmines.

The JSA provides the adversaries with a neutral zone and has been the site of past dialogue. It’s also a popular tourist destination, recognizable for the blue conference buildings that straddle the border.