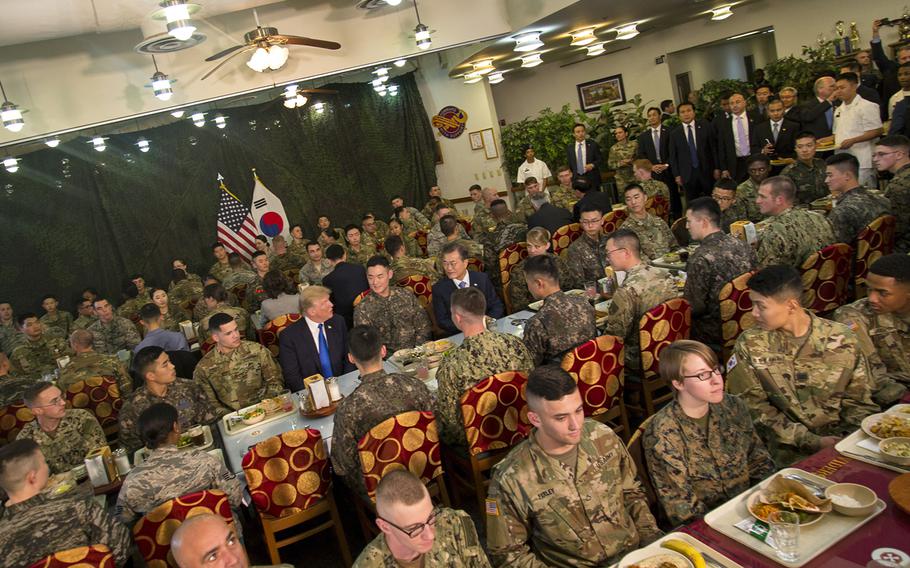 SEOUL, South Korea — While the United States and North Korea try to revive nuclear talks, another dispute is simmering on the southern half of the peninsula over funding for U.S. forces.

Seoul and Washington failed to agree on a new cost-sharing deal for the 28,500 U.S. servicemembers stationed in South Korea before the latest five-year contract expired on Dec. 31.

That has raised fears that President Donald Trump may threaten to draw down forces as he prepares for a possible second summit with North Korea.

The longtime allies held 10 rounds of talks since March but remained deadlocked as the new year began over Washington’s reported demand that South Korea increase its contribution by as much as 150 percent.

The Special Measures Agreement, as the funding deal is known, largely covers the salaries of South Korean employees who staff restaurants and provide other crucial services for the troops, dependents and civilian contractors.

U.S. Forces Korea, the main command, has warned the Korean Employees’ Union that it may have to put local staff on unpaid leave in mid-April if an agreement isn’t reached.

That would be a blow to South Korean President Moon Jae-in’s administration, which is facing criticism over a rising unemployment rate.

The two sides continue to work on concluding a new deal, according to the State Department, but no date has been publicly announced for more formal talks.

The allies also missed the Dec. 31 deadline in 2013, but they managed to reach a deal a few weeks later when South Korea agreed to increase its contribution by 5.8 percent, with a 4 percent cap on the inflation rate.

“While a gap between agreements is not ideal, it does occasionally occur,” a State Department spokesperson told Stars and Stripes in an email.

“For example, in 2014, the SMA did not enter into force until June despite the earlier agreement expiring in December 2013,” the official said, declining to provide more details about an ongoing bilateral negotiation.

Raising the stakes While brinkmanship is common in the funding talks, Trump has upped the ante by demanding an unprecedented increase that officials say the South Korean government couldn’t accept even if it wanted to due to political and domestic constraints.

The U.S. administration also is asking to renegotiate the agreement every year instead of every five years as is current practice, according to South Korean media.

“Washington is asking too much. It needs to be at a level that our people can swallow,” said South Korean lawmaker Baek Seung-joo, a deputy defense minister under the previous Conservative government and a ranking member of the National Assembly’s Defense Committee.

The SMA has to be ratified by the legislature.

“It doesn’t take into consideration South Korea’s ability to shoulder the financial burden,” Baek said. “It’s not like the number of American troops in Korea has been doubled.”

Baek and other South Korean officials believe Trump’s rhetoric on withdrawing troops is a bargaining chip and both sides insist the alliance remains “ironclad.”

But experts note that Trump has made efforts to force allies to pay more a key part of his presidential platform and shown that he’s willing to act unilaterally by ordering the withdrawal of troops from Syria.

Closer to home, Trump announced the suspension of joint military exercises on the peninsula without consulting with South Korea or his own aides after his first summit with North Korean leader Kim Jong Un on June 12 in Singapore.

“The president is using the potential of troop withdrawal to influence SMA negotiations, to get more out of the deal,” said Kyle Ferrier of the Korea Economic Institute of America, a Washington, D.C.-based think tank.

“This is a fundamental difference because it puts the long-term strategic interests of the U.S. on the line in exchange for short-term economic gains, which is not something that we, to my knowledge, at least publicly, have been done before,” he said in a telephone interview.

Withdrawal worries The dispute is putting pressure on the alliance, which was forged in the 1950-53 Korean War, amid sensitive diplomacy with North Korea over its nuclear weapons program. The two sides are believed to be planning a second summit between Trump and Kim, possibly as soon as mid-February.

Ferrier and others say Trump could use the cost-sharing dispute as an excuse to reduce troops without making it seem like a concession to the North, which along with China has long sought to evict the Americans from the peninsula.

“In recent weeks, Trump has complained, both in private and public, that South Korea isn’t paying enough to support U.S. troops there,” Washington Post columnist Josh Rogin wrote. “The worst-case scenario is that Trump will agree to withdraw U.S. troops from the Korean Peninsula [and blame it on the South Koreans] at his upcoming summit with Kim Jong Un.”

The president has made clear that he would like to withdraw forces from South Korea to save costs.

Worries that he would act on his words were high enough that Congress moved to restrict the Pentagon’s ability to cut troop numbers in South Korea below 22,000 in the defense policy bill for this year.

Moon has insisted the U.S. troop presence is a matter for the allies to decide and told reporters earlier this month that Kim understands that “USFK is not linked to the denuclearization process of the Korean Peninsula.”

Observers familiar with the issue say the senior diplomats leading the negotiations so far have reached a wall and intervention by Trump and Moon will be needed to break the impasse.

South Korea has helped offset the costs of stationing U.S. forces in South Korea since 1991. The State Department hasn’t given details about its latest demands, saying only that South Korea should pay “significantly more.”

“We have an understanding that we should raise this cost a little bit higher than the previous one,” said Won Gon Park, a professor at Handong Global University who was involved in previous SMA negotiations on the South Korean side.

“As far as I know, South Korea and the United States almost reached agreement on a 20 percent increase,” he added. But, he said, Trump apparently ordered the U.S. team to demand that South Korea double its contribution in their last meeting, which was held last month in Seoul.

Complicating factors The negotiations are complicated by other factors, including plans for upcoming cost-sharing talks with Japan, which hosts some 50,000 U.S. troops, as well as demands for NATO allies to increase their contributions.

Trump may want to use the South Korea talks to show he’s unwilling to back down.

Seoul insists it pays a fair share at some $850 million per year, or nearly half the total cost of stationing the troops in the South.

South Korea also footed most of the $11 billion-plus bill for the expansion of the Camp Humphreys Army garrison as part of a long-delayed plan to relocate most U.S. forces south of Seoul.

The dispute isn’t expected to affect military readiness in the near-term, and so far it’s business as usual on the bases as there are reserve funds to keep operations running.

North Korea watchers, however, worry it will have a lasting effect by stoking uncertainty in the alliance, especially if Trump moves to reduce the U.S. military footprint.

“In one sense that’s fine and welcome,” he added. “But if we were to move out too quickly, I think it would potentially present options for exploitation from North Korea and China.”