US, S. Korean militaries have eye on North after reports of new weapons activity 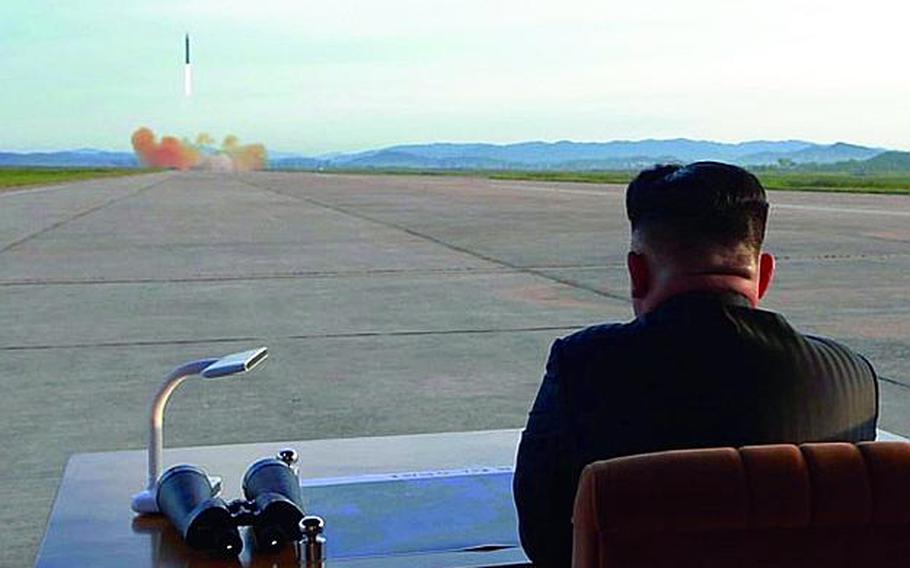 This image of North Korean leader Kim Jong Un watching a launch was released by the Korean Central News Agency a day after Pyongyang test-fired a missile over Japan on Friday, Sept. 15, 2017. (Courtesy of KCNA)

SEOUL, South Korea — The U.S. and South Korean militaries are closely monitoring the North, officials said Thursday, as new nuclear weapons activity was reported after the summit between President Donald Trump and Kim Jong Un ended without a deal.

Uranium enrichment facilities appear to be operating normally at the North’s Yongbyon nuclear complex, South Korea’s spy agency told lawmakers, according to the Yonhap News Agency. It also said vehicles used to transport supplies were spotted at a missile research center, which has been used to produce intercontinental ballistic missiles.

That followed reports and satellite images showing that the communist state has begun restoring facilities at a long-range rocket launch site that was dismantled last year as part of talks with the United States on relinquishing its nuclear weapons program.

The apparent renewed activity came after Trump and Kim failed to reach an agreement during their Feb. 27-28 summit in Hanoi, Vietnam, due to sharp disagreements over the extent of sanctions relief in exchange for disarmament.

Seoul and Washington are coordinating military intelligence about the reported developments, a spokeswoman for the South Korean Defense Ministry said Thursday.

The North agreed to work toward the “complete denuclearization of the Korean Peninsula,” during its first summit with the United States on June 12 in Singapore. But talks have since stalled over how to implement that promise.

The two sides agreed to continue diplomatic efforts after leaving Hanoi, and Trump said Kim promised not to resume the missile and nuclear tests that raised tensions in 2016-17.

The North has taken several other steps since diplomatic efforts began early last year, including starting to dismantle the Sohae Satellite Launch Station, also known as Tongchang-ri, northwest of Pyongyang.

When asked about the reports, Trump said he’s still hoping to reach agreement but he would be “very, very disappointed in Chairman Kim” if they are confirmed.

He added that he didn’t think he would be disappointed, “but we’ll see what happens.”

The Yongbyon complex was at the heart of the summit failure. Washington said the North offered to dismantle it but insisted on the lifting of all economic sanctions imposed since 2016 in return. Pyongyang insisted that it demanded only partial relief from the punishing measures.

“The uranium enrichment facilities have been in normal operation since even before the recent summit between the United States and North Korea,” the National Intelligence Service was quoted as telling lawmakers Tuesday in a closed-door briefing, Yonhap reported.