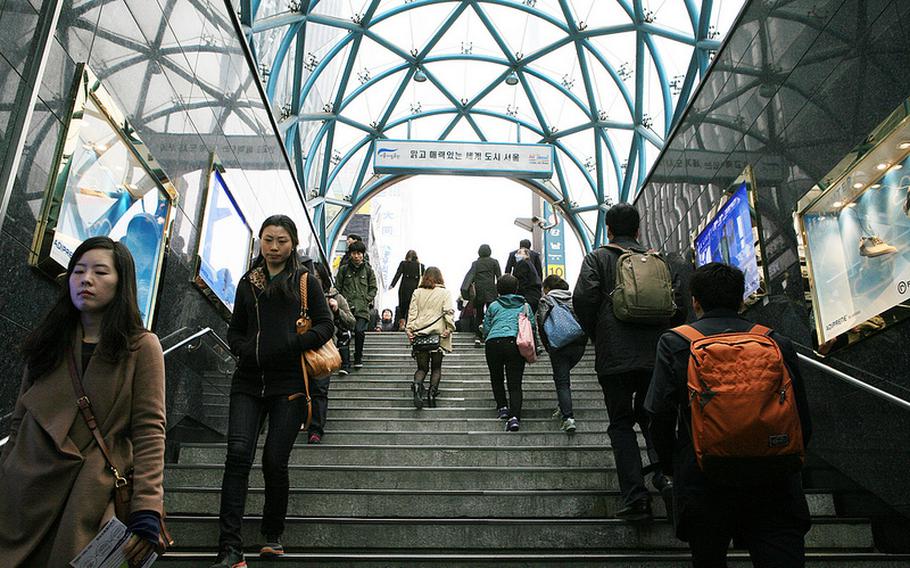 Gangnam Station, seen here March 28, 2013, is one of the busiest in Seoul. (Seoul Metropolitan Government/Flickr)

SEOUL — U.S. and South Korean officials will hold their third annual joint anti-bioterrorism exercise this week in Seoul, a sprawling mega-city of more than 10 million residents that some fear could someday become a target of an attack.

“Seoul is the capital of South Korea, and there are so many people in this city, so bioterrorism is a serious threat,” a spokesman for South Korea’s Ministry of National Defense said Monday ahead of the three-day “Able Response 13” exercise that starts Wednesday.

About 80 U.S. officials and 120-130 South Korean military officials are expected to participate in the tabletop exercise, according to the MND.

“South Korea and the U.S. will review the government-level integrated response system that relates to not only biological outbreaks but also bioterrorism threats, and discuss ways to enhance bioterrorism response capability,” an MND statement said. Participants will study simulated attack scenarios and review the outcomes to identify weaknesses in response plans.

U.S. Forces Korea referred questions about the exercise, which is being held at the Korea Institute for Defense Analyses, to the MND.

MND officials said the exercise is meant to address a threat from any group or country, including North Korea, which has ratcheted up tensions with both Washington and Seoul this year by conducting its third nuclear test and then making a number of threats against both countries.

An official with the MND’s counter-weapons of mass destruction division said the bioterrorism exercise is focusing on “unknown actors.”