US, S. Korea discuss denuclearization incentives ahead of expected talks with North 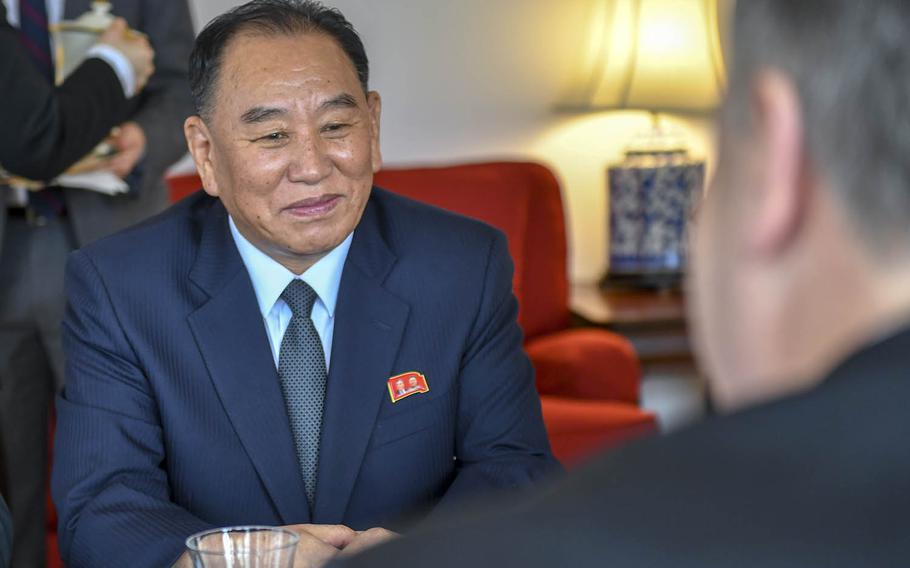 SEOUL, South Korea — The United States and South Korea are discussing incentives for the North to give up its nuclear weapons, South Korea’s top diplomat said Wednesday.

The comments came as Washington and Pyongyang are reportedly stepping up preparations for a second summit, which would suggest a possible breakthrough in the impasse in nuclear talks.

China’s Foreign Ministry confirmed that Kim will transit through Beijing. South Korea’s Yonhap News Agency said he and two other North Korean officials were booked on a United Airlines flight Thursday from Beijing to Washington.

The State Department said it had no meetings to announce.

The adversaries have been deadlocked over how to move forward after President Donald Trump and North Korean leader Kim Jong Un agreed to the general principle of denuclearizing the Korean Peninsula during their first meeting on June 12 in Singapore.

The Trump administration insists it will maintain economic sanctions against the North until “final, fully verified denuclearization” is achieved. But Pyongyang wants a reciprocal approach that would include rewards for steps already taken, including a moratorium on nuclear and missile testing.

South Korea has been thrust in the role of mediator as it tries to keep the sides at the table and prevent a new spike in tensions.

“South Korea has been consulting closely with the United States about which kinds of denuclearization measures should be followed and which corresponding measures that Washington can take,” Kang told reporters in Seoul.

She mentioned a formal end to the 1950-53 Korean War, which concluded with an armistice instead of a peace treaty, as well as humanitarian support or permanent communication channels as possible incentives.

Kang also said the South would not independently resume inter-Korean projects at a North Korean mountain resort or a joint industrial park, although those also could be among the “corresponding measures” discussed.

Pompeo had been due to hold talks with his North Korean counterpart in the United States in November, but that meeting was canceled.

Hopes for a new round of diplomacy were raised when North Korea’s leader said in his New Year’s Day address that he was willing to meet with Trump “at any time.”

But Kim Jong Un also warned the communist state may be forced to seek “a new way” if Washington continues to press with economic sanctions aimed at punishing the regime for its nuclear weapons development.

Trump said later that he would be setting up a meeting with Kim “in the not-too-distant future” to restart talks about the North’s nuclear programs.

Kim Jong Un also said he would be looking to “achieve results” in any talks with Trump when he traveled to China for his fourth summit with President Xi Jinping.

The diplomatic surge that began last year has eased tensions on the divided peninsula after months of missile and nuclear tests and threats of war by both Kim and Trump.

The rapprochement will face another test in the spring when South Korea and the U.S. usually conduct annual joint war games known as Key Resolve and Foal Eagle.

Several military exercises have been canceled or scaled back after Trump announced he was suspending them while negotiations with the North were underway.

North Korea hates the drills, which it considers a rehearsal for an invasion.