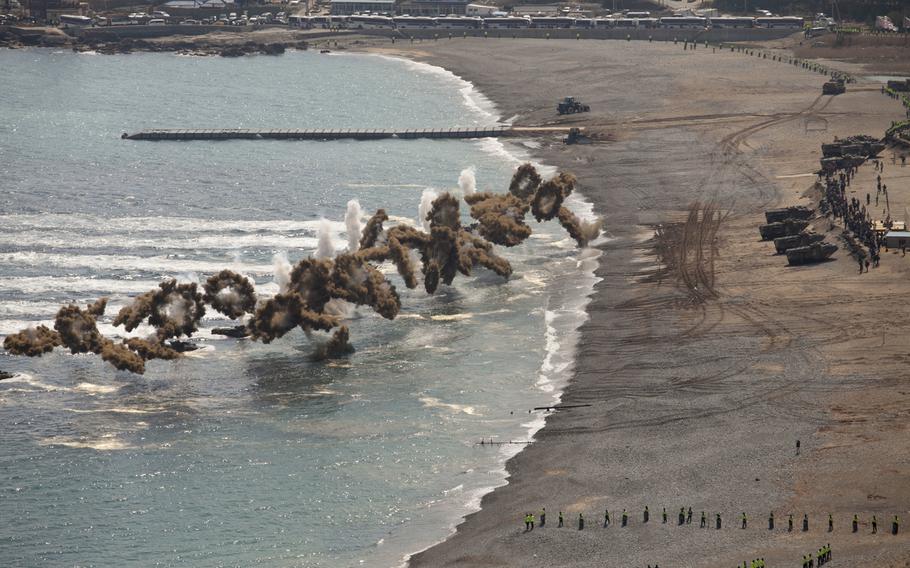 SEOUL, South Korea — The United States and South Korea canceled plans to conduct a Marine amphibious assault exercise as part of joint war games this week due to bad weather, the Combined Forces Command said Wednesday. The announcement comes days after the allies began annual military drills known as Foal Eagle amid a diplomatic push with North Korea that has sharply eased tensions on the divided peninsula. The allies are keeping this year’s exercises low-key due to the developing detente with the North after months of saber rattling and missile tests as it made progress in its nuclear weapons program. The U.S.-led command said the changes to the Ssangyong exercises, which are part of Foal Eagle, were due to bad weather. The assault exercise, which evokes memories of the World War II invasion of Normandy, had been scheduled for Thursday. “U.S. and (South Korean) leadership canceled the amphibious landing portion of the training exercise ... after weather assessments indicated unsafe landing conditions for servicemembers,” the CFC said in a press release. Participating units in the air and sea portions will continue training as planned, it said, adding the routine drills are held twice a year to build and maintain fundamental military readiness. “This was a good call by the on-scene commanders, who must balance readiness and risk — even in a training environment,” said Gen. Vincent Brooks, commander of the CFC and U.S. Forces Korea. Seoul and Washington agreed to delay the springtime exercises until after the Olympics and Paralympics, which were held in February and March in the South Korean town of Pyeongchang. The allies resumed the field-training drills on Sunday with about 11,500 U.S. and 290,000 South Korean troops expected to participate. Foal Eagle is due to last about a month, half the duration last year. A computer-simulated exercise known as Key Resolve is due to begin on April 23 and will last about two weeks, officials said.

About 28,500 U.S. servicemembers are based in South Korea, which remains technically at war with the North after their 1950-53 conflict ended in an armistice instead of a peace treaty.gamel.kim@stripes.comTwitter: @kimgamel