US, Russia speak daily to ensure proxy forces in Syria don’t attack each other 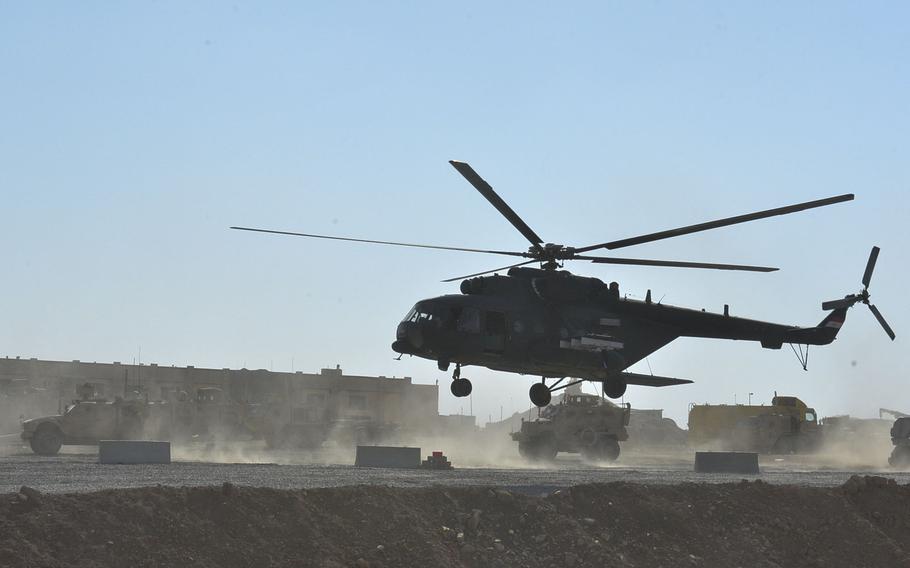 Buy Photo
An Iraqi army Mi-17 helicopter transporting Lt. Gen. Abdulmanir Yarallah, commander of the operation to liberate Tal Afar, west of Mosul, lands at a joint Iraqi and coalition tactical base at Buwayd on Sunday, Aug. 27, 2017. Yarallah met with Army Col. Pat Work and other U.S. advisers Sunday afternoon, the eighth day of fighting in Tal Afar, when the town was declared fully liberated. (Chad Garland/Stars and Stripes)

WASHINGTON — The United States and Russia are working to ensure U.S.-backed forces and pro-Syrian regime forces avoid clashes when they eventually converge on the final Islamic State held territory along the Euphrates River south of Raqqa, according to a top U.S. commander.

The two nations speak through military channels multiple times a day to ensure the safety of their troops operating on the crowded eastern Syrian battlefield and to plan ways to keep their proxy forces apart down the road, Lt. Gen. Stephen Townsend, the commander of the U.S.-led, anti-ISIS coalition, said Thursday from Baghdad. As the territory held by ISIS decreases, those proxy forces will inevitably have to operate within closer proximity of each other, he said.

“We are trying to de-conflict this for the future, and we have lines that are agreed to that will cover much of the middle Euphrates River valley … not all of that [is complete] yet, but we’ll get to that when the time comes,” Townsend told reporters at the Pentagon. “I’m reasonably confident that we’ll be able to work through this. Everyone that is converging down there is trying to defeat ISIS as their first priority.”

Townsend, who has commanded the Operation Inherent Resolve coalition since August 2016 and will relinquish command next week to Army Lt. Gen. Paul Funk, said the middle Euphrates River valley will be where ISIS makes its “final stand.”

The U.S.-backed Syrian Democratic Forces will ultimately turn south toward Deir al-Zour once they’ve finished their assault on Raqqa, the former capital for ISIS in Syria. With the aid of U.S. airpower, the SDF has capture more than 60 percent of that city through three months of battle. The assault is expected to last at least several more weeks but could linger on for several months.

Townsend said planning early for the eventual pivot south will be important, especially because pro-Syrian regime forces have already set up operational outposts in the desert regions south of Deir al-Zour and appear to be prepping to advance on ISIS from there.

The pro-regime forces and SDF have clashed before. Skirmishes between the two factions in Tabqa, just west of Raqqa, eventually led to the United States shooting down a Syrian fighter jet that targeted SDF forces in June. Townsend said the two forces have not clashed since.

That is largely due to the U.S.-Russian negotiated battle zones that have ensured the Syrian forces remain well south of Raqqa. Townsend said those combat spaces have been established to guide the two sides once the SDF begins moving south, but they have not been entirely worked out.

Likely, the SDF will be instructed to remain north of the Euphrates River as it eventually pushes into the final stretch of land ISIS controls — some 155 miles of land along the river stretching from Deir al-Zour and into Iraq, a defense official said.

That will leave the pro-Syrian regime south of the Euphrates and allow both forces to battle ISIS simultaneously but apart, the official said on the condition of anonymity.

The United States has no relationship with Syria or the forces that support it, however Townsend has said previously that he is open to allowing Syrian troops to battle ISIS as long as they don’t attack U.S. forces or those forces it supports.