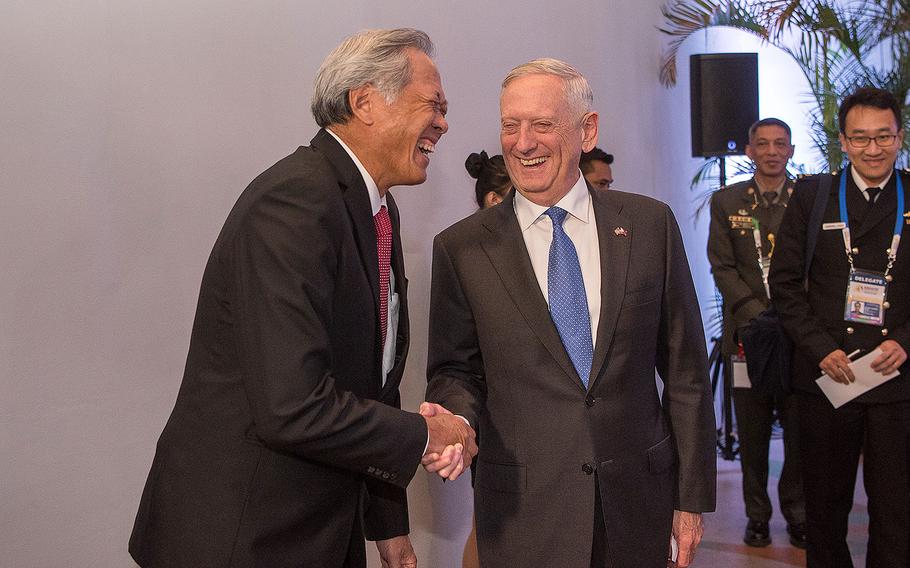 But he also clung to diplomatic efforts aimed at resolving the standoff over the North’s nuclear weapons program.

The mixed messages reflect the lack of good options in dealing with the North, which conducted its sixth and most powerful nuclear test on Sept. 3 and has made rapid progress in developing a missile that could threaten the U.S. mainland.

U.S. policy has been aimed at forcing Pyongyang to abandon its nuclear ambitions. but North Korea has defiantly persisted with its efforts despite punishing economic sanctions and diplomatic pressure.

While both sides say that in principle they’re willing to return to dialogue, the standoff over the North’s nuclear ambitions leaves little room for negotiation.

Mattis noted the growing threat from the North in remarks during his trip to Seoul over the weekend for security talks ahead of President Donald Trump’s first official visit to the region.

“Our military and diplomatic collaboration has taken on a new urgency,” he said Saturday. “North Korea has accelerated the threat that it poses to its neighbors and the world through its illegal and unnecessary missile and nuclear weapons program.”

“It engages in outlawed behavior, threatening behavior, condemned by unanimous U.N. Security Council resolutions,” he added, standing next to his South Korean counterpart at a press conference.

Mattis also said the North is “overmatched” by the firepower of the U.S.-South Korean alliance and will be “reducing its own security” if it persists with its nuclear weapons program.

“I cannot imagine a condition under which the United States would accept North Korea as a nuclear power,” he said in response to a question.

The defense secretary reiterated that diplomacy is the administration’s preferred course of action but stressed that military options remain on the table.

“Make no mistake -- any attack on the United States or our allies will be defeated,” he said. “Any use of nuclear weapons by the North will be met with a massive military response, effective and overwhelming.”

Trump has taken a hard line against the North despite past statements that he would sit down for a hamburger with the country’s leader Kim Jong Un.

In recent months Trump has dubbed Kim “Little Rocket Man” and warned that he’ll “totally destroy” the country if necessary to defend the United States and its allies.

The heightened rhetoric has raised concerns that tensions could erupt into a new conflict that would be devastating for all sides.

Bloomberg News reported last week that a new report found that as many as 300,000 people could be killed in the first days of fighting even without the use of nuclear weapons.

North Korea has hundreds of thousands of soldiers and a massive stock of artillery and other weapons dug into positions near the heavily fortified border and within striking distance of Seoul.

“Such a conflict could also involve a massive mobilization of U.S. forces onto the Korean Peninsula, and high military casualty rates,” the news agency quoted the Congressional Research Service report as saying.

Some 28,500 U.S. servicemembers are stationed in South Korea, which remains technically at war with the North after their 1950-53 conflict ended in an armistice instead of a peace treaty. The U.S. also has tens of thousands of other troops along with nuclear-powered submarines, supersonic bombers, aircraft carriers and other assets poised to mobilize in the region.

Mattis said military options were needed to bolster the diplomatic efforts by Secretary of State Rex Tillerson, who has said he is reaching out to Pyongyang in hopes of resuming long-stalled dialogue.

But Trump himself tweeted that he thought Tillerson was “wasting his time.” North Korea, meanwhile, has said it’s open to talks but will never put its nuclear and missile programs on the table.

Pyongyang has been accused of using past negotiations to wrest aid and concessions from the West that ultimately failed to prevent it from developing nuclear weapons.

Experts are divided over how much progress the North has made in terms of miniaturizing a warhead and mastering the technology needed for it to re-enter the atmosphere.

CIA Director Mike Pompeo has said the North is just months away from perfecting its nuclear weapons capabilities, although he noted intelligence on the country is imperfect.

“They are close enough now in their capabilities that from a U.S. policy perspective we ought to behave as if we are on the cusp of them achieving” their objective, he said earlier this month.