US reassures South Korea it will pay for THAAD, Seoul says 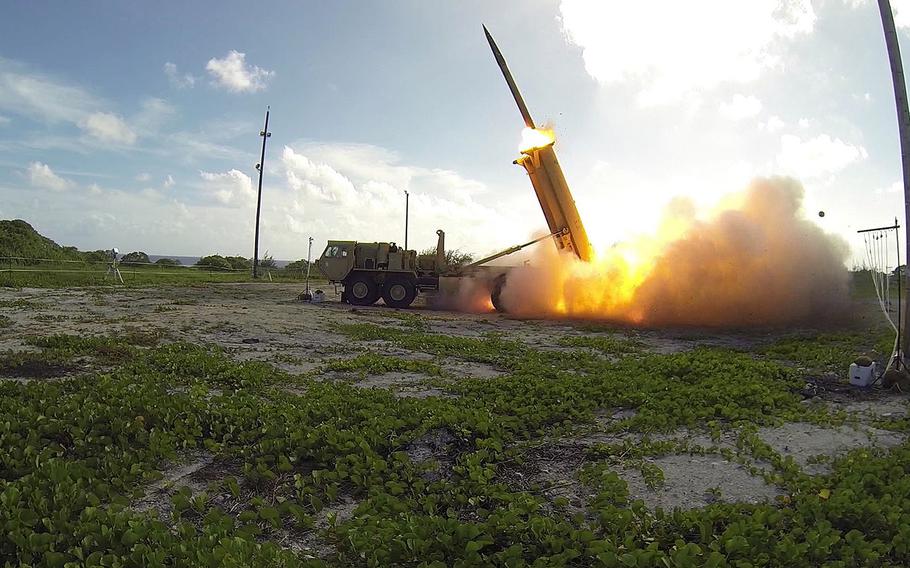 SEOUL, South Korea — The U.S. administration reassured South Korea on Sunday that it will pay the cost of an advanced missile defense system as officials tried to quell outrage after President Donald Trump said Seoul should cover the $1 billion cost.

Trump’s statement cast a shadow over the longstanding alliance between the two countries at a time of rising tensions over North Korea’s nuclear weapons program.

The North test-fired a missile Saturday. Military officials said it broke up over land shortly after takeoff, but the launch underscored Pyongyang’s defiance despite mounting international pressure and the threat of new economic sanctions.

THAAD protests The growing nuclear and missile threat from North Korea was the reason cited by Washington and Seoul when they agreed after months of talks last year to deploy a U.S. Terminal High Altitude Area Defense system in a remote southeastern area.

But the decision has met fierce opposition from local residents and China, which fears it could be used against its own military.

Protests broke out Wednesday after U.S. trucks carried several THAAD components to their new home in the farming area of Seongju in an overnight operation despite the fact that a promised environmental assessment has yet to be completed.

The issue has emerged as a hot topic in the May 9 snap presidential election that is expected to usher in a left-leaning government.

Frontrunner Moon Jae-in of the liberal Democratic Party has said THAAD operations should be suspended until the next administration can review it.

“South Korea is already paying dearly for the deployment of the system,” the Korea Times newspaper wrote in an editorial published Sunday. “National unity was deeply divided over it. The country is also suffering huge losses from economic retaliation by China, which opposes THAAD.”

Critics also say the system is designed to mainly protect U.S. forces in southern hubs and doesn’t have Seoul within its range. Military officials insist it is part of a layered defense system and the South Korean capital is covered by Patriot missiles already in place.

Trump questioned why the United States should pay for the system.

“I informed South Korea it would be appropriate if they paid. It’s a billion-dollar system,” he told Reuters in an interview on Thursday. “It’s phenomenal, shoots missiles right out of the sky.”

South Korea’s military quickly rejected that assertion, saying that according to the agreement Seoul is responsible for providing the land and basic facilities for THAAD while Washington should pay costs for the deployment and operational work.

But he also stressed that the United States was looking at possible changes in its funding arrangements with South Korea, as well as NATO.

"What I told our South Korean counterpart is until any renegotiation, that the deals in place, we’ll adhere to our word," McMaster told “Fox News Sunday.”

He insisted he was not contradicting the president.

Condemning North Korea’s most recent missile test, McMaster said North Korea poses "a grave threat" not just to the United States and its allies in Asia but also to China.

He also noted Trump has said he would prefer to work with China and others to resolve the crisis, which means working with partners to enforce current U.N. sanctions and perhaps “ratcheting up those sanctions even further.”

“It also means being prepared for military operations if necessary,” he added.

Failed missile test U.S. Pacific Command said the missile was fired Saturday from a site near the Pukchang air field and exploded over land.

“The missile did not leave North Korean territory,” said Cmdr. Dave Benham, a PACOM spokesman. Past tests have seen missiles launched into the sea off the country’s east coast.

South Korea’s military said the missile flew for several minutes and reached a maximum height of 44 miles before it apparently failed.

It said it was still analyzing the type of missile. A U.S. official, speaking on condition of anonymity, told The Associated Press the missile was likely a medium-range KN-17.

U.S. officials caution against gloating over failures, noting that North Korea learns something from each launch and is making faster-than-expected progress toward its goal of developing a nuclear-tipped missile that could reach the U.S. mainland.

Experts also say the North is prepared to conduct another nuclear test. It already has carried out five underground nuclear explosions, including two last year.

Trump, who has called on China to do more to rein in its communist ally, denounced the missile test, tweeting: “North Korea disrespected the wishes of China & its highly respected President when it launched, though unsuccessfully, a missile today. Bad!”

The maritime drills were the second in less than two months for the aircraft carrier and its accompanying warships.

Trump’s administration has signaled he favors a hard line against the North by deploying a large amount of military assets to the region, including the Carl Vinson and the guided-missile submarine USS Michigan.

North Korea, which has threatened to sink the Carl Vinson, said Sunday that the Ohio-class submarine could suffer the same demise.

“The moment the USS Michigan tries to budge even a little, it will be doomed to face the miserable fate of becoming a underwater ghost without being able to come to the surface,” the propaganda website Uriminzokkiri said, according to South Korea’s Yonhap news agency.

North Korea, which frequently reacts to world events with exaggerated and belligerent rhetoric, sees the deployment of U.S. ships and military exercises as preparations for an invasion despite U.S. and South Korea’s insistence that the drills are defensive in nature.