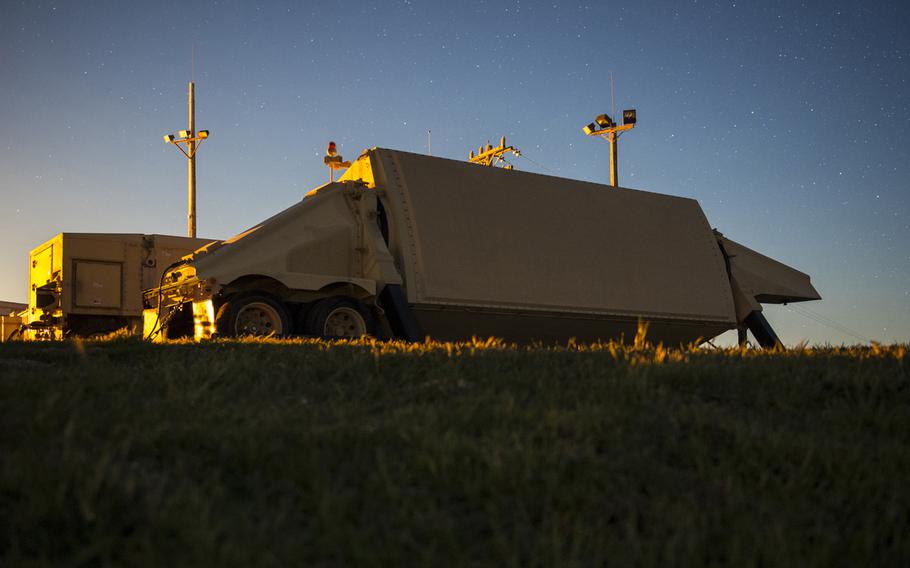 China criticized on Thursday the U.S. deployment of an X-band radar system, like the one shown here, to a small U.S. installation in Japan. The radar is positioned to detect North Korean ballistic missile launches, U.S. officials said. Courtesy of Raytheon (Courtesy of Raytheon)

YOKOSUKA NAVAL BASE, Japan — China has criticized the U.S. deployment of an anti-missile radar at a base in Japan, saying the move undermines “mutual trust.”

Foreign Ministry spokesperson Hua Chunying avoided naming the United States, but her response came after a question about the X-band radar’s recent arrival at a seaside base in Kyoto Prefecture.

“The anti-missile deployment in the Asia-Pacific by a certain country in the pursuit of unilateral security goes against regional strategic stability and mutual trust, as well as peace and stability in Northeast Asia,” Hua told a news conference Thursday.

China has been rapidly developing an advanced missile system that could potentially be used to restrict U.S. Navy movement in the international waters of the East and South China seas, according to Pentagon reports.

On Oct. 16, the Navy announced it would move two additional Aegis-equipped destroyers, USS Benfold and USS Milius, to its Japan-based 7th Fleet in 2015 and 2017, respectively.

The new radar is no surprise to China, nor is it positioned with China in mind, U.S. officials said. The U.S. already had one AN/TPY-2 deployed in northern Japan’s Aomori Prefecture.

Defense Secretary Chuck Hagel announced plans for the second radar move during an October 2013 news conference in Tokyo, as a response to North Korean missile tests and threats.

“This additional radar will bolster our ability to defend the U.S. homeland and Japan against North Korea’s ballistic missiles,” Hagel said.

A U.S. official at the time said the new radar would “close the gaps” in its Korean Peninsula missile launch detection. The radar has a 600-mile range in its forward-based mode, according to Defense Industry Daily.

Although China remains one of North Korea’s few allies, signs of strain in the relationship have appeared in recent years. Beijing protested Pyongyang’s third nuclear test in February 2013 and implemented trade sanctions against its neighbor.

However, China has also continued to defend North Korea on human rights issues and fears the consequences of a regime collapse, wrote Adam Segal, senior fellow at the non-partisan Council on Foreign Relations.

“The idea that the Chinese would turn their backs on the North Koreans is clearly wrong,” Segal stated.