US pushes NATO on long-term commitment to Afghanistan 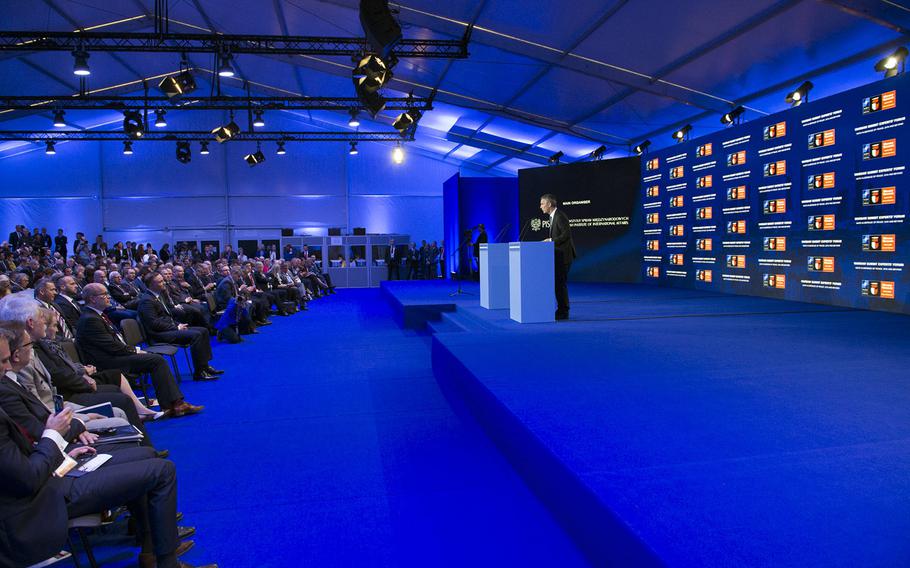 WARSAW, Poland — Defense Secretary Ash Carter hopes to secure long-term commitments from NATO partners to fund and train Afghan troops, as the Pentagon considers its own plans for the 8,400 U.S. troops who will remain in Afghanistan next year.

President Barack Obama announced Wednesday he had reconsidered earlier plans to draw down the U.S. force size in Afghanistan from the current 9,800 troops to 5,500 by the end of 2016. Instead, the U.S. will maintain 8,400 servicemembers in the nation where it has been at war for nearly 15 years.

The president’s decision, Carter told reporters traveling with him on Friday to a NATO summit in Warsaw, was based on the recommendations Carter and his top military leaders provided. It sends a strong message to NATO partner countries that the U.S. is committed to the long-term security of Afghanistan, he said.

U.S. troops in Afghanistan currently serve two primary missions — training, advising and assisting the Afghan security forces under NATO’s Resolute Support mission and conducting counterterrorism operations under the unilateral Operation Freedom’s Sentinel. Carter said the Pentagon has not yet determined the details of the withdrawal, such as the exact time frame or the makeup of the remaining 8,400 troops. Currently nearly 7,000 are committed to the Resolute Support mission, while the remainder — largely special operations forces — are focused on raids and other counterterrorism operations against al-Qaida and Islamic State militants.

“We haven’t decided,” Carter said. He added, “We’re going to accomplish both missions.”

A senior defense official said most of those troops would remain committed to the training effort. The decision will ultimately be made by America’s senior commander in Afghanistan, Army Gen. John “Mick” Nicholson, said the official who spoke anonymously to discuss planning.

Lawmakers, including Sen. John McCain, R-Ariz., who chairs the Senate Armed Services Committee, questioned why Obama decided to pull out 1,400 troops instead of keeping all 9,800 troops in Afghanistan.

Carter said Pentagon leadership arrived at the 8,400 based on the challenges they anticipate the Afghan security forces would face through 2017.

“We didn’t start with any number,” Carter said. “We started with a mission. What did we need to accomplish ... what would give the greatest chance of success to the Afghan security forces?”

Slowing the drawdown, Carter said, would be especially useful at the end of the fighting season — generally at the onset of winter. The U.S. will then help the Afghans “refit, retrain, and re-equip” for the next fighting season, which usually begins in the spring, when the snow melts and the Taliban come down from their mountain retreats.

Afghan President Ashraf Ghani welcomed the decision as showing “continued partnership” in pursuing common interests. Carter and Obama were scheduled to meet with Ghani and government Chief Executive Abdullah Abdullah on Saturday during the second day of the NATO summit.

Although the U.S. will pull some of its own forces out of Afghanistan at the end of the year, Pentagon officials will lobby their international partners at the summit to maintain their current troop levels, another senior defense official said.

Thirty-eight nations contribute about 6,000 troops to the Resolute Support mission in addition to the U.S. servicemembers.

The size of the international force is expected to stay roughly the same, a senior NATO official said. Countries had already committed roughly 12,500 troops to continuing the mission in 2017, said the official, who was not authorized to discuss the alliance’s plans publicly. Some nations, he added, were expected to increase their force size.

But the exact number of troops, the official said, will not be the most prominent issue when NATO heads meet Saturday to discuss the alliance’s future in Afghanistan.

“There’s not a magic troop number here,” the official said. “The strategic number everybody needs to be focused on is are we going to continue to pay for the Afghans to do what they’re doing today, which is to be in the lead of the fight.”

The U.S. and NATO hope to ensure funding commitments for the 352,000 Afghan military and police forces through 2020. The U.S. contributes the vast majority of the money — about $3.45 billion in 2017 — but it relies on partner nations to provide about $1 billion. The Afghans will contribute about $421 million next year.

Carter and the NATO official said they anticipate NATO allies will continue their support for the Resolute Support mission.

“Many of them have also indicated a recognition of the need to stick with the Resolute Support mission and to do more than they might have anticipated in past years,” he said. “And so, a number of them have indicated that they would be making those contributions. And I think the president will hear from the other heads of state of NATO about what they’re willing to do also in the future years.”