US prepares for larger military presence in Poland 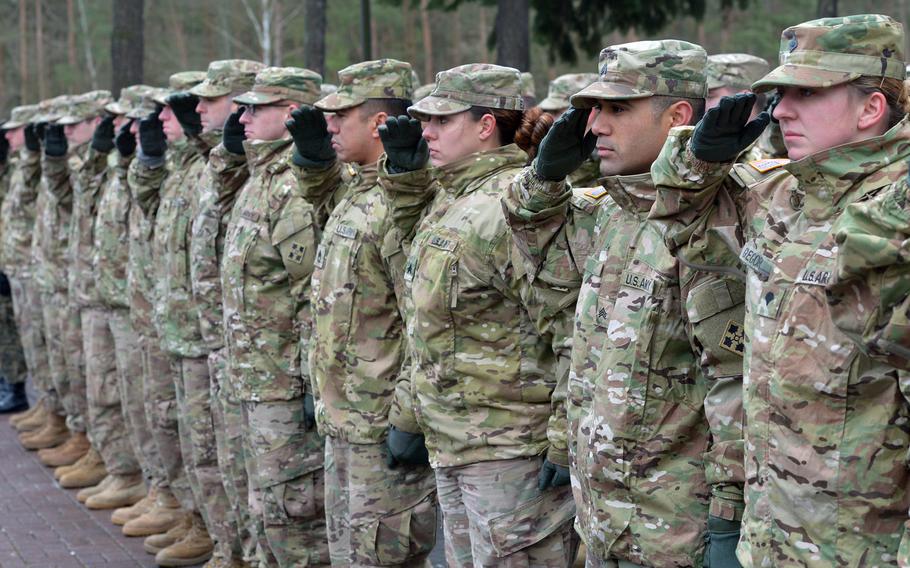 Buy Photo
American rotational soldiers of the 4th Infantry Division salute during the national anthem at a welcoming ceremony for them in Zagan, Poland. The U.S.plans to deploy more troops to Poland, the U.S. ambassador to the country, Georgette Mosbacher, said Wednesday. (Michael Abrams/Stars and Stripes)

STUTTGART, Germany — The U.S. will deploy hundreds more troops to Poland in a push to further boost its military presence in a region where the Pentagon already has thousands of servicemembers conducting operations, America’s top diplomat in the country said.

The U.S. ambassador to Poland, Georgette Mosbacher, said the increase will be “significant.”

The ambassador stopped short of saying whether the move involves setting up a permanent military base in the country, but suggested future deployments will be rotational in nature. Warsaw has lobbied hard for a permanent U.S. base and more ground troops, offering $2 billion to help fund the idea.

The Pentagon wants a “more agile, more rotating, rather than where you have physical hospitals and homes and you bring your families,” Mosbacher told the newspaper. “But in terms of a presence that is undeniable and a large number of American troops here, that’s a given. And I think [the Poles are] going to get most of what they want.”

The U.S. already has roughly 4,000 troops in Poland. In addition to an armored brigade on rotation, infantrymen guard Poland’s border with the Russian enclave of Kaliningrad and a U.S. Air Force detachment operates in Lask.

The Navy also has a contingent of sailors in the northern Polish town of Redzikowo, where work continues on a missile defense site that integrates with systems in Romania and at sea.

This week, U.S. Vice President Mike Pence is in Warsaw for a summit on security in the Middle East. During his visit he was expected to discuss U.S. military relations with Poland and security in Europe.

Meanwhile, acting Defense Secretary Pat Shanahan was in Brussels Wednesday for talks with NATO defense ministers. Among the topics being reviewed are efforts to bolster alliance defenses in Europe in light of concerns about a more aggressive Russia.

Allies also were expected to discuss Washington’s decision to withdraw from the 1987 Intermediate-Range Nuclear Forces Treaty banning on all ground-launched intermediate-range cruise and ballistic missiles. The U.S. and NATO claim Russia has been in violation of the treaty for several years because of a new missile system, something Moscow denies.

Now, allies are discussing how it will respond and what kind of weapons may be needed to counter Russia.

NATO Secretary-General Jens Stoltenberg said Wednesday at the start of talks in Brussels that there is still a chance for Moscow to come into compliance with the treaty, which doesn’t officially expire until August.

In the meantime, “we are planning for a future without the INF Treaty, and with more Russian missiles,” Stoltenberg said.

“We don’t have any intention to deploy new nuclear land-based weapons systems in Europe,” he said.

But allies have a “wide range of other options — conventional and other options. But I will not speculate about them now,” Stoltenberg said.