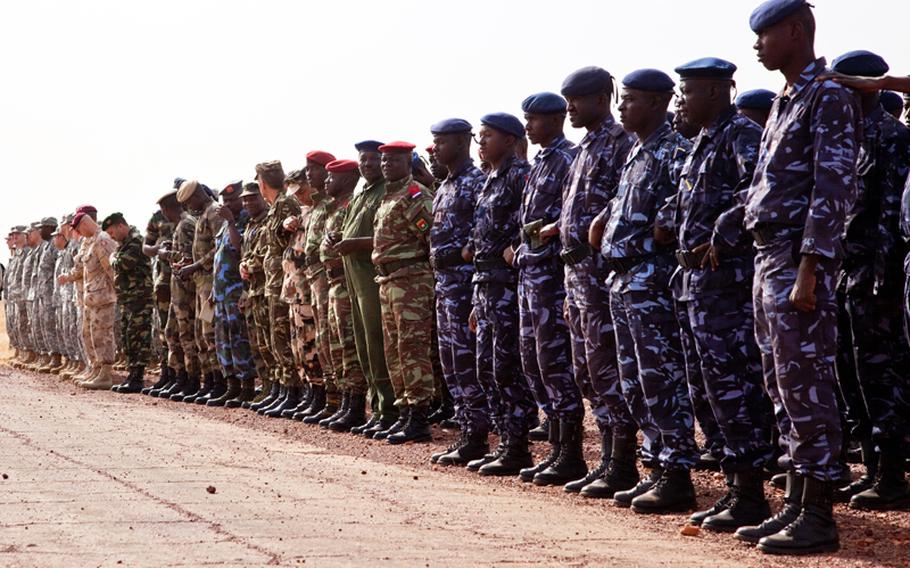 Troops from the United States, Mali, Canada, Senegal, Uganda, Algeria and Tunisia at the Atlas Accord 2012 exercise at a base in Sevare, Mali. The U.S. has been providing planning support to regional militaries working on an African-led intervention that was not expected to take place before the fall. (Kimberly Trumbull/U.S. Army)

France’s decision to intervene in Mali put an abrupt end to the cautious approach favored by the U.S. and others in the international community in dealing with hardline Islamists who overran much of the north last year and highlighted possible “missteps” by the U.S, analysts say.

The U.S. has been providing planning support to regional militaries working on an African-led intervention that was not expected to take place before the fall.

France’s decision to launch a bombing campaign and military incursion to try to prevent the militants from advancing south toward Mali’s capital has raised questions about the role years of U.S. counter-terrorism funding and training may have played in sowing the country’s current chaos.

Some experts say the attempts to train Mali’s military diverted attention from the destabilizing forces gathering in the north.

Mali is part of the Defense Department’s Trans-Sahara Counter-Terrorism Partnership to combat terrorism in North Africa by bolstering regional militaries and governments through defense and development aid.

Islamic militants in the region became a focus of U.S. policymakers in the aftermath of the 9/11 attacks. Osama bin Laden encouraged militants to sink roots in the region, and the formation of al-Qaida in the Islamic Maghreb sparked a new focus for counterterrorism operations.

Yet the Malian government has throughout its history struggled with the Tuaregs, a nomadic tribe spread across western North Africa and much of northern Mali. Tuaregs had rebelled against the country’s government three times since Mali’s 1960 independence from France.

In recent years, Tuaregs complained of poor development, lack of infrastructure and scant economic opportunities compared to the south, said Rudy Atallah, former Africa counter-terrorism director for the Defense Intelligence Agency who made dozens of trips to the country’s north. Drug smuggling was rampant in the lawless north, which the Malian army feared entering. Atallah said the government turned its military on its internal enemy instead of jihadist militants.

Tuaregs regrouped in the aftermath of the Libya conflict, when mercenaries returned to the country with heavier arms.

Secular Tuaregs founded a movement in 2011, known as MNLA, and rebelled against the Malian government in January 2012. By April, they had seized most of the north. They were soon pushed aside by Ansar al-Dine, an Islamist Tuareg front that aligned with al-Qaida in the Islamic Maghreb.

The U.S. has since supported a plan by the Economic Organization of West African States to deploy a 3,300-strong force, comprising members of regional African militaries.

“I think some people feel like they were caught flat-footed because no one saw the Islamists moving south, wanting to take Mali under their banner,” Atallah said.

Analysts disagree about the seriousness of that advance and the need for French intervention.

John Campbell, an Africa expert with the Council on Foreign Relations, argues that AQIM does not represent a serious threat to the country’s capital, making France’s intervention premature and disruptive.

“What you had was an Islamist movement toward the south that was actually not very great and produced panic in Bamako,” he said. “And Bamako, in turn, to me, produced deep alarm, if not panic in Paris.”

Atallah maintained that the level of support for AQIM in the country remains difficult to gauge. Militants claim to have sleeper cells in the capital, he said.

“The thing is, no one has really dissected this thing in a deep way to find out who are the supporters and who are not,” he said.

“We want to stand by our allies, but we’re not happy to have our hand forced and our policy preference (overridden),” said J. Peter Pham, director of the Africa program at the Atlantic Council.

Campbell said U.S. policy in the region needs to be reappraised in light of recent events.

“It seems to me that one of the things that Mali does is it shows that the Trans-Sahara Counter-Terrorism Partnership simply isn’t working,” he said.