US-Philippines relations on an uptick ahead of annual Balikatan drills 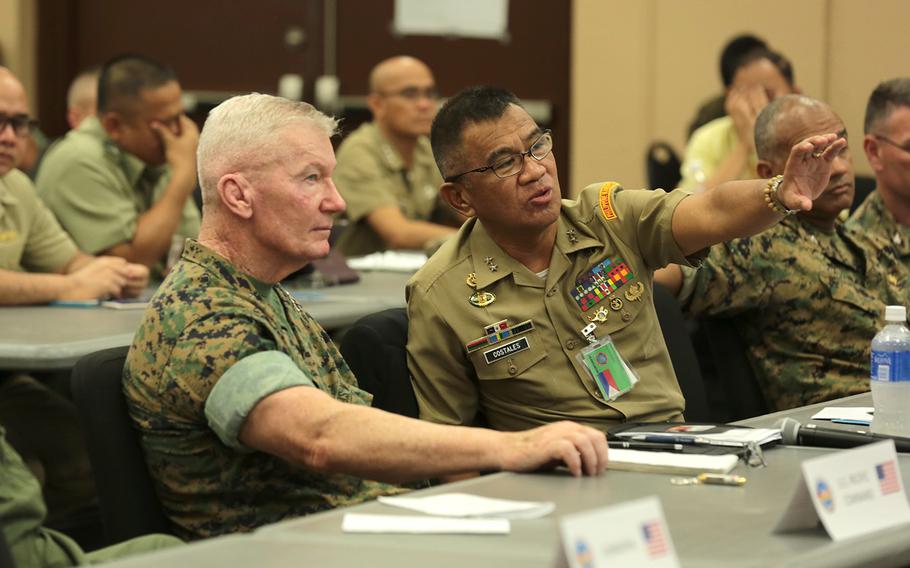 Thousands of U.S. troops will head to the Philippines for next month’s Balikatan military exercise, in a sign that the dark clouds that hovered over the alliance last year may be clearing.

A month later, Duterte said he wanted all foreign troops out of his country within two years and talked of revising his country’s security agreements, which include an alliance with Washington.

However, the special operators have remained to help Filipinos battle Islamic militants, and there are no signs of scrapping a bilateral agreement allowing U.S. troops on Philippine bases.

At an April 9 ceremony to honor U.S. and Filipino veterans of World War II’s Battle of Bataan, Duterte referred to America as “the Philippines’ only defense treaty ally,” and said the nations should move their relationship forward with mutual respect.

“Duterte’s people will quietly shelve this anti-Americanism,” Patricio Abinales, a Philippines expert at the University of Hawaii, said last week, citing pushback from the military and the strongman’s affinity for President Donald Trump.

Nearly 3,000 U.S. troops are preparing to train in the islands during Balikatan. That’s fewer than the 5,000 who participated last year, but Special Operations Forces continue to rotate to Mindanao, said Marine 1st Lt. Paul Gainey, a spokesman at the U.S. embassy in Manila.

Special Operations Command Pacific is rotating troops through the country to assist local security forces, he said in an email last week.

The plan to remove the U.S. operators was shelved after Philippine generals in the south complained, Abinales said.

“Do not underestimate the quiet opposition of the Armed Forces of the Philippines to Duterte’s plan to delink the Philippines from her alliance with the U.S.,” Abinales said.

There are other reasons for optimism about bilateral relations. U.S. Ambassador to the Philippines Sung Kim has been able to restore old ties, and his mention of Mindanao as a major target of American aid was well received, Abinales said.

During Balikatan, U.S. and Philippine forces will plan, coordinate and conduct operations that can be applied across a range of military capabilities, including counterterrorism operations, Gainey said in the email.

“The U.S. military and [Armed Forces of the Philippines] planners have developed the exercise over the course of the last year to address shared priorities and, as always, to enhance the interoperability of our two militaries and strengthen our alliance,” he said.

Balikatan will focus on improving the effectiveness of U.S.-Philippine humanitarian aid and relief in response to a natural disaster, Gainey said.

PHIBLEX, the annual U.S.-Philippines amphibious landing exercise, won’t happen this year but there will be a new event called Kamandag — Tagalog for “venom” — in the fall, he said.

Meanwhile, the Enhanced Defense Cooperation Agreement, which will see facilities for U.S. personnel and equipment built on Philippine bases, is still being planned by the two governments, Gainey said.

“The transfer included over 400 M203 grenade launchers, 85 M40A5 sniper rifles, and a RQ-11B Raven unmanned aerial vehicle system consisting of three UAVs for exclusive use and ownership by the Armed Forces of the Philippines,” he said.