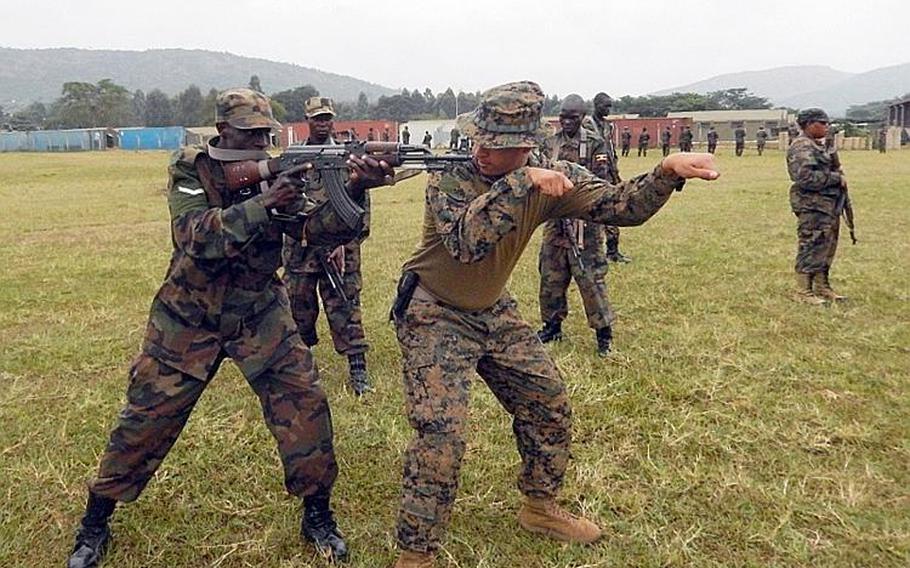 STUTTGART, Germany — A White House decision to cancel an aviation exercise in Uganda, among other measures, in connection with that country’s anti-gay law will not affect other key U.S. military partnerships with the Ugandan military, U.S. Africa Command said on Friday.

Among the missions that will press forward are efforts to train forces for operations in Somalia, where Ugandan troops have played a key role in countering the Islamic militant group al-Shabab, according to AFRICOM.

The training of African Union forces has been a centerpiece of U.S. strategy in Somalia, where militants at one time threatened to overrun the capital, Mogadishu. Though al-Shabab remains a threat, U.S.-trained Ugandan troops and other African Union forces have been widely credited with bringing a measure of security to the area.

In addition, Ugandan troops have been key to international efforts to track down members of the Lord’s Resistance Army, a rebel group on the loose in central Africa. U.S. support for those efforts, which includes the deployment of special operations forces, will also continue, AFRICOM said.

AFRICOM was unable to say precisely how many exercises are now taking place in Uganda. The training schedule can shift from day to day as small teams of trainers move in and out of the region. U.S. Army Africa and a special task force of Marines have been among the elements that have led training efforts in the country.

On Thursday, the Obama administration announced it was canceling an aviation exercise and imposing a host of other penalties, such as preventing entry to the United States of Ugandan officials accused of human rights abuses. Funding also will be cut or redirected for certain programs connected to the Ugandan police. Regarding military cooperation, penalties have been limited to the one planned aviation exercise.

After Uganda’s passage of anti-gay legislation in February, the U.S. launched a review of its relationship with the country to, as Secretary of State John Kerry said at the time, “ensure that all dimensions of our engagement, including assistance programs, uphold our anti-discrimination policies and principles and reflect our values.”

While the Obama administration has called on Uganda’s political leadership to overturn the law, those requests have been ignored. However, Uganda’s prominent role as a provider of security in the region is likely to be one reason the close military alliance remains intact.

Uganda isn’t the only country with anti-gay laws with which the U.S. maintains close ties.

Afghanistan, Saudi Arabia, Algeria and Nigeria all have such laws on the books.