US Patriot missile battery in Turkey comes under NATO command A Patriot Missile battery sits on an overlook at a Turkish army base at Gaziantep, Turkey, Feb. 4, 2013. (Glenn Fawcett/Department of Defense)

A Patriot Missile battery sits on an overlook at a Turkish army base at Gaziantep, Turkey, Feb. 4, 2013. (Glenn Fawcett/Department of Defense) 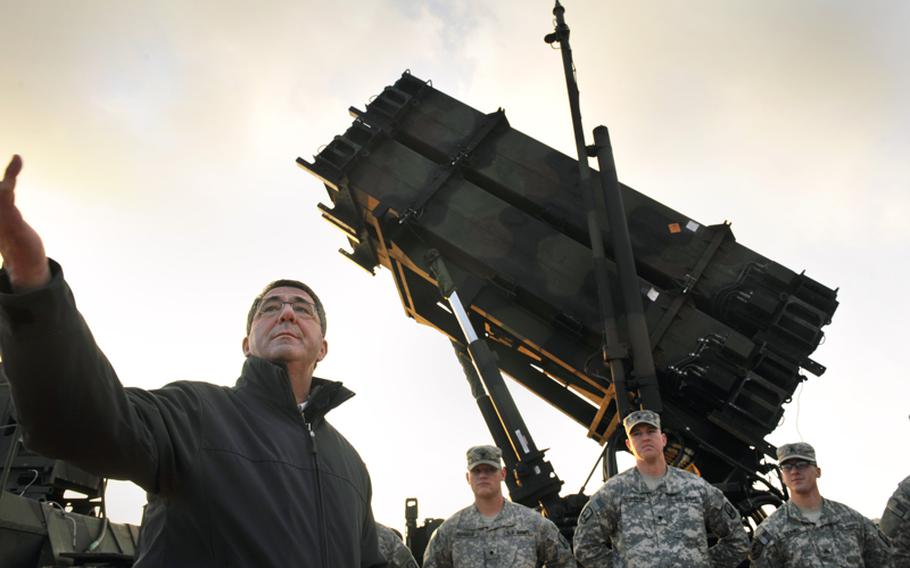 Deputy Secretary of Defense Ashton B. Carter speaks to troops as he arrives at a Turkish army base at Gaziantep, Turkey, Feb. 4, 2013. Carter came to see Patriot missile batteries installed with the help of U.S. forces to provide air defense support to Tukey amid concerns about cross-border shelling from Syria. (Glenn Fawcett/Department of Defense)

Currently, five of six Patriot batteries belonging to Germany, the Netherlands and the U.S. are operating in Turkey as part of an effort to protect Turkish airspace from a potential missile strike from neighboring Syria.

A second U.S. Patriot battery is expected to become operational in the coming days as construction at its operational site in Gaziantep nears completion.

While four Patriot batteries belonging to Germany and the Netherlands have been operating for more than a week, the U.S. effort has been slower to get off the ground. U.S. officials have said the effort was delayed because of legal complications in obtaining the needed approvals from the Turkish government. Now, the mission appears to be back on track.

On Saturday, a battery of soldiers from the 3rd Battalion, 2nd Air Defense Artillery out of Fort Sill, Okla., made the move from Incirlik Air Base to a Turkish army base in Gaziantep, said Capt. Royal Reff, a spokesman for the U.S. mission in Turkey. That battery became operational Saturday evening, he said. The other U.S. battery, still positioned in Incirlik, will soon make the move to Gaziantep to man the second Patriot system, bringing the NATO mission up to full capacity. NATO says the missile defense systems will provide protection for roughly 3.5 million Turkish citizens. The mission is expected to last up to one year.

In December, NATO defense ministers authorized the deployment of Patriots in response to Turkish concerns over sporadic cross-border shelling from Syria in October that killed several Turkish citizens. Although Damascus apologized for the attacks which it said occurred in the heat of battle with rebels along the border, Turkish forces retaliated with artillery strikes against Syrian troops.

Ankara also fears that Syria could use chemical weapons mounted on tactical missiles to strike at targets inside Turkey. The Patriots have the ability to intercept incoming ballistic missiles.

NATO deployed several air defense batteries to southeastern Turkey 10 years ago during the U.S.-led invasion of Iraq, which was also believed to possess chemical weapons. The Patriots were never used and were withdrawn several months after the conflict ended.