US, partners work to strengthen sea policing as piracy off West Africa surges 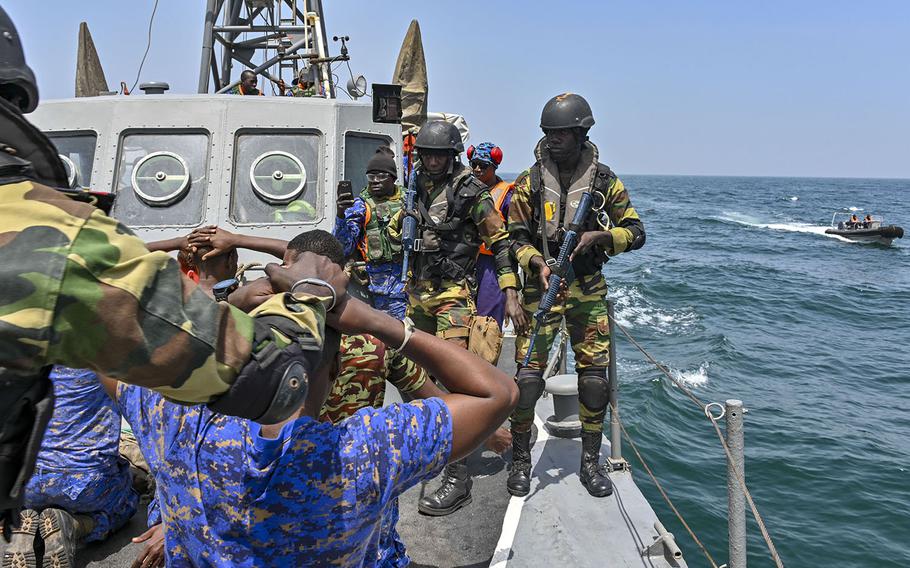 Members of the Senegalese and Gambian navies conduct a simulated search-and-seizure raid during a drug smuggling and human trafficking scenario aboard a Gambian patrol vessel on March 18, 2019 during Obangame Express. The U.S.-led exercise brought together 33 countries to practice teamwork in combating seagoing crimes in West African waters. (Tamara Vaughn/U.S. Navy)

Members of the Senegalese and Gambian navies conduct a simulated search-and-seizure raid during a drug smuggling and human trafficking scenario aboard a Gambian patrol vessel on March 18, 2019 during Obangame Express. The U.S.-led exercise brought together 33 countries to practice teamwork in combating seagoing crimes in West African waters. (Tamara Vaughn/U.S. Navy) 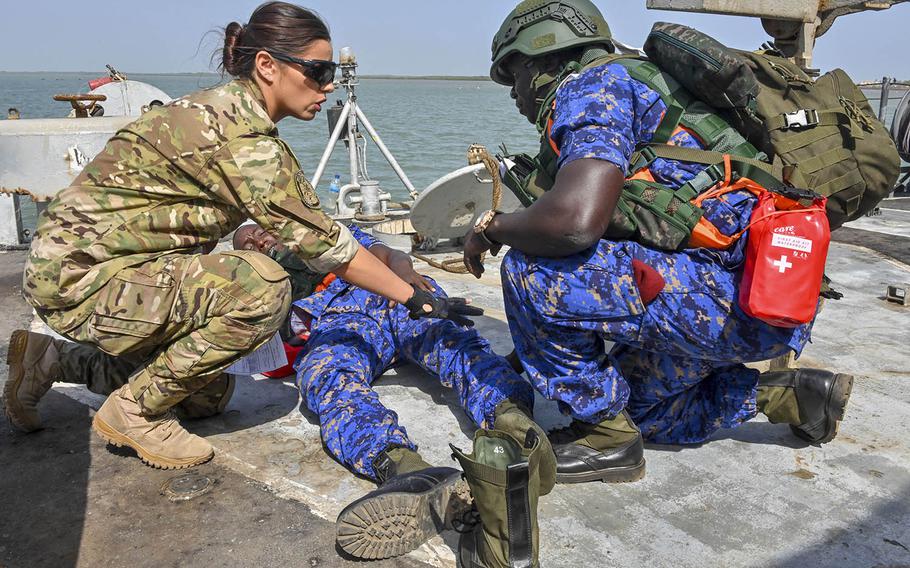 Coast Guard Petty Officer 3rd Class Alyssa Perry works with a member of the Gambian navy to treat a simulated wound during a drug smuggling and human trafficking scenario on March 18, 2019, near Gambia as part of Obangame Express. The exercise seeks to improve teamwork between West African countries to combat seaborne crimes. (Tamara Vaughn/U.S. Navy)

A U.S.-led exercise aimed at boosting cooperation between West African nations in maritime policing comes at a time when seaborne piracy in some areas is increasing and the trans-Atlantic drug trade remains active.

Thirty-three countries are taking part in this year’s Obangame Express off the West African coast so they can better combat crimes like piracy, drug smuggling and human trafficking.

The navies practice together during simulations to spot, raid and search suspicious ships, as well as to detain suspects and properly handle evidence.

The nine-day exercise, which ends Friday, is one of three sea-policing drills hosted by U.S. Africa Command. The other two are Cutlass Express in East Africa and Phoenix Express in the Mediterranean.

Obangame was first launched in 2010 when piracy reached record levels off the coast of West Africa.

The push to improve collaborative policing among African countries that were not used to working together helped reduce piracy in the region. But after a period of decline, it surged again in the Gulf of Guinea in 2018.

“U.S. efforts have helped but things ebb and flow, and since the underlying drivers have not changed, then constant vigilance is still needed,” said Christopher Jasparro, national security affairs professor at the Naval War College. “Waters off Nigeria have persistently been the main piracy and sea robbery hotspot.”

Last year, the Gulf of Guinea recorded 48 incidents of piracy, up from 33 in 2017 and 14 in 2014, according to the International Maritime Bureau, which tracks seaborne crimes globally. The region had the worst acts of piracy overall in the world, including all six hijackings, 13 of the 18 ships fired upon, and 130 of the 141 hostages taken, it reported.

Meanwhile, about two-thirds of cocaine shipped from South America to Europe transits through West Africa, according to the United Nations’ global report on drugs.

This year, search-and-rescue operations and advanced medical assistance were added to the exercise, Berg said. And greater emphasis was placed on correctly searching vessels and handling evidence to ensure effective prosecution of criminals, she said.

“Obangame Express has grown in scope from a communications exercise to become what it is now — a comprehensive maritime security event that exercises the full spectrum of activities,” Berg said.