US, partners hope for thaw in relations with Afghanistan 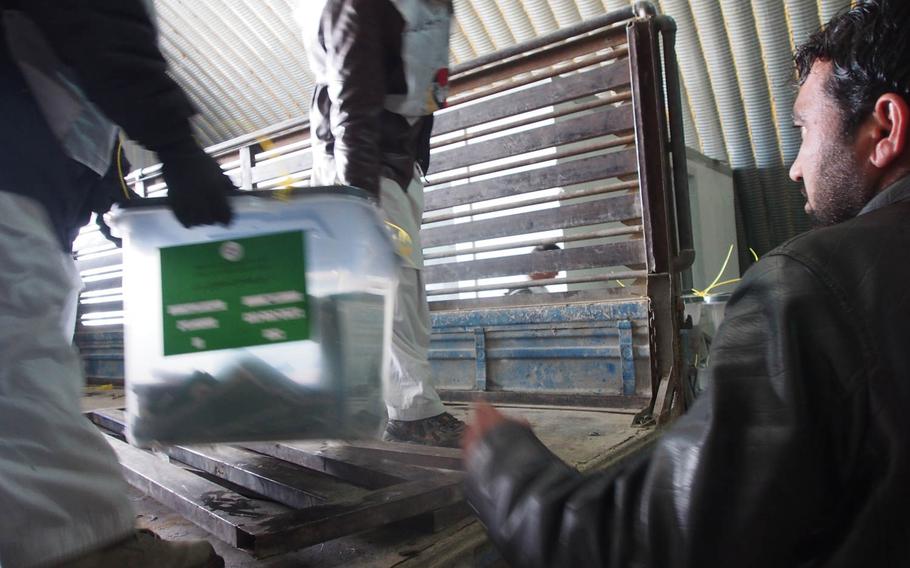 Boxes of ballots are offloaded in a storage hangar at Afghanistan's Independent Election Commission in Kabul on Sunday, April 6, 2014. Despite threats of attacks from the Taliban, Saturday's Afghan presidential election was largely violence-free. (Heath Druzin/Stars and Stripes)

Boxes of ballots are offloaded in a storage hangar at Afghanistan's Independent Election Commission in Kabul on Sunday, April 6, 2014. Despite threats of attacks from the Taliban, Saturday's Afghan presidential election was largely violence-free. (Heath Druzin/Stars and Stripes) 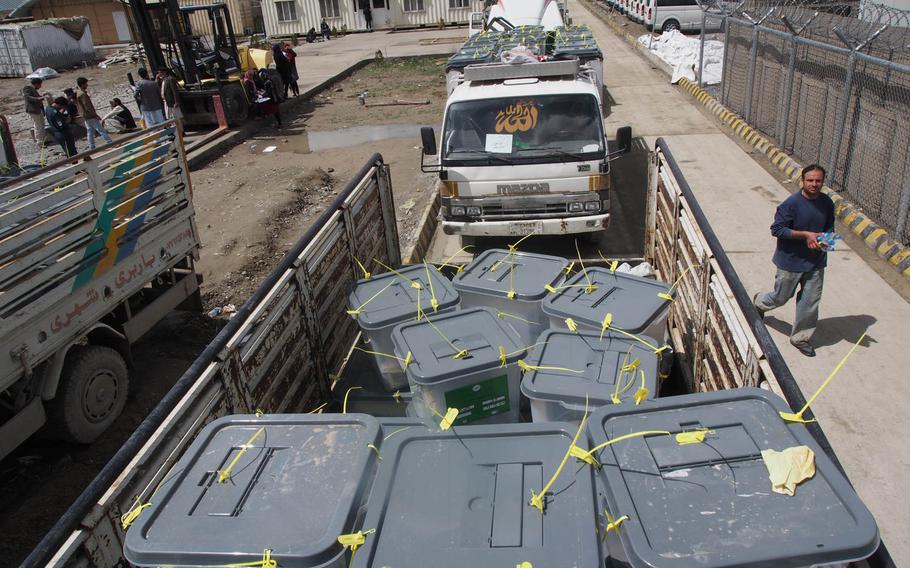 Trucks full of ballot boxes were lined up at Afghanistan's Independent Election commission on Sunday, April 6, 2014, a day after an estimated seven million Afghans voted in the country's presidential election. Whoever is declared winner will inherit deep corruption and dysfunction in much of the government. (Heath Druzin/Stars and Stripes)

KABUL — With all of the questions surrounding the outcome of the Afghan presidential election, the U.S. and its allies are taking comfort in one certainty: the country’s next leader will not be Hamid Karzai.

For the last year or so, the relationship between Washington and Kabul has been on a relentless downward spiral of accusations and complaints, culminating in Karzai’s refusal to sign a bilateral security agreement with the U.S. that is crucial for a small international military force to remain in the country past the end of the year for a training, assistance and counter-terrorism mission.

Karzai, Washington’s hand-picked choice to lead Afghanistan after the 2001 invasion ousted the Taliban, bristled at what he saw as U.S. violations of Afghan sovereignty. American officials became increasingly exasperated with his public statements portraying the international military force in the country as reckless and ineffective.

Adding a recent personal bent to the animosity was a Washington Post report that Karzai has a list of terrorist attacks he suspects were carried out by the U.S., including a massacre at a Lebanese restaurant in Kabul that left more than 21 people dead, among them three Americans.

The change in Afghan leadership won’t remove all the problems facing Afghanistan — poverty, ethnic divisions, raging insurgency and a shattered state. However, an election hailed both in Afghanistan and abroad for the high turnout and a relatively low level of violence offers hope that the relationship between Afghanistan and its international backers can be healed.

“It’s just become a very emotional relationship,” said Scott Smith, director for Afghanistan and Central Asia Programs at the U.S. Institute for Peace. “Having a new president come in with the wind of legitimacy at his back and be able to start discussing things from a fresh agenda will be immensely helpful.”

In the short term, at least, there are hopeful signs of a thaw when a new administration comes in, though who the next president will be is unlikely to be known for weeks, or even months. All of the major candidates who ran in Saturday’s presidential election have said signing the security agreement will be a priority and they have championed improved relations with the West as a key foreign policy goal.

Abdullah Abdullah, who finished second to Karzai in the 2009 fraud-riddled election and is a leading candidate in this year’s presidential race, said he wants to quell the ill feelings that have built up under the Karzai regime.

“I think (the relationship with the West) will be back on the right footing,” he said. “In the past few years, we have missed some opportunities because of hiccups.”

Zalmai Rassoul, seen as Karzai’s favored candidate, has shied away from direct criticism of the Afghan president, but has pledged to have a positive relationship with Washington.

“We believe the United States is a strategic friend and partner for Afghanistan,” Rassoul’s spokesman, Javed Faisal, said.

Noting that all the leading candidates had pledged to sign the security agreement, Sen. James Inhofe, R-Okla., said it was in the best interests of the U.S. “to help ensure the next leader has a smooth transition into office.

“I expect the United States will have a robust relationship with the post-Karzai administration elected by the Afghan people, and this relationship will help ensure a secure Afghanistan and a stable region.”

Diplomats and elected officials were cautious, however, about appearing critical so soon after what many see as a successful Afghan election, but the relationship between Karzai and the United States has boiled over into public animosity in the past. In a December letter to President Barack Obama highlighting the importance of the bilateral security agreement, Sen. Carl Levin, D-Mich., chairman of the Senate Armed Services Committee, urged President Barack Obama to look past Karzai.

“The next Afghan president, whoever he is, is also likely to be more reliable than President Karzai, and there would be greater confidence in his sticking with an agreement he has signed,” Levin wrote.

In response to a Stripes query, U.S. ambassador to Afghanistan James Cunningham released a statement saying that a successful transfer of power from Karzai to the next president and the signing of the security agreement would pave the way for a positive relationship between Washington and Kabul.

“With those two things accomplished, we will look forward to working with the next president and to continued cooperation in building a stronger, more peaceful and stable Afghanistan,” he said.

Other military partners in Afghanistan, too, are looking forward to working with the next Afghan administration.

British Ambassador to Afghanistan Sir Richard Stagg said the United Kingdom remains committed to Afghanistan no matter what, but that cooperation will be easiest if Afghanistan’s new president works closely with international backers.

“We look forward to working with whoever the Afghan people elect as their new president,” he said in an emailed statement in response to Stripes’ questions. “We are determined to keep working with Afghanistan, and build on our close cooperation, for many years to come. The more the new president wants to work with the international community, the more we can do to support Afghanistan’s future.”

When the sheen of the election wears off, though, the U.S. and its partners will find themselves with a new president, but all of the same deep problems they faced while working with Karzai. Anthony Cordesman, a security analyst at the Center for Strategic and International Studies in Washington, who frequently acts as a consultant for the Department of Defense, is critical of what he sees as lack of planning for the post-combat mission the U.S. is hoping to lead starting next year.

“No one knows what that timeline is and no one has a plan,” he said. “It’s also a fact of life that, despite the constant positive spin that comes out of people (about Afghanistan), you don’t have a meaningful improvement in any of the security ratings or in any of the economic areas.”

How well the next administration tackles those problems will be key to the legacy of a controversial war of which President Barack Obama has taken ownership. More than 2,300 U.S. troops have died in the conflict, which has spanned more than 12 years and, according to one study from the Center for Strategic and International Studies, has cost American taxpayers more than $640 billion. What originally began as a military effort to oust al-Qaida and their Taliban hosts following the 9/11 attacks has morphed into the most expensive aid mission in U.S. history amid a deeply unpopular war.