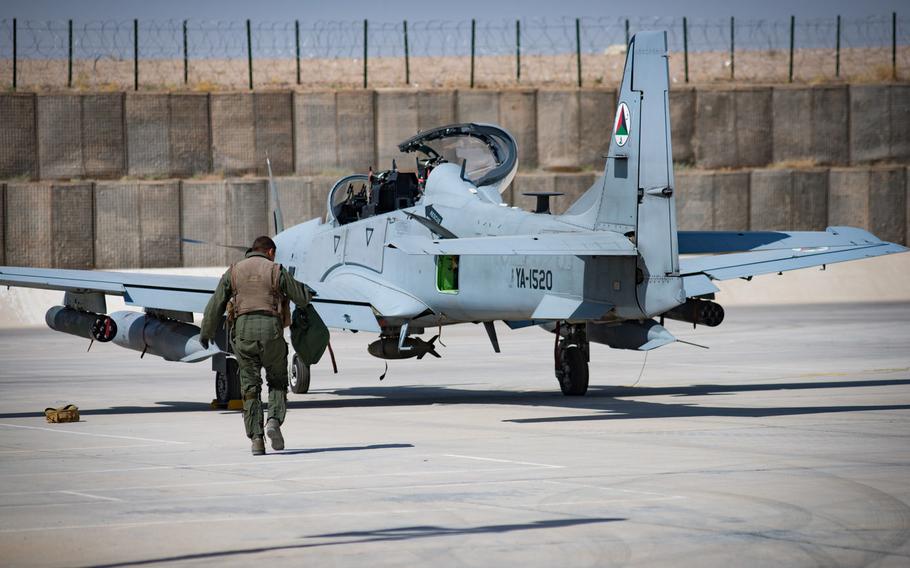 An Afghan A-29 pilot walks toward his aircraft at Kandahar Airfield, Afghanistan, Sept. 10, 2017. The Afghan Air Force plans and conducts all A-29 combat missions throughout Afghanistan. (Alexander Riedel/U.S. Air Force)

An Afghan A-29 pilot walks toward his aircraft at Kandahar Airfield, Afghanistan, Sept. 10, 2017. The Afghan Air Force plans and conducts all A-29 combat missions throughout Afghanistan. (Alexander Riedel/U.S. Air Force) 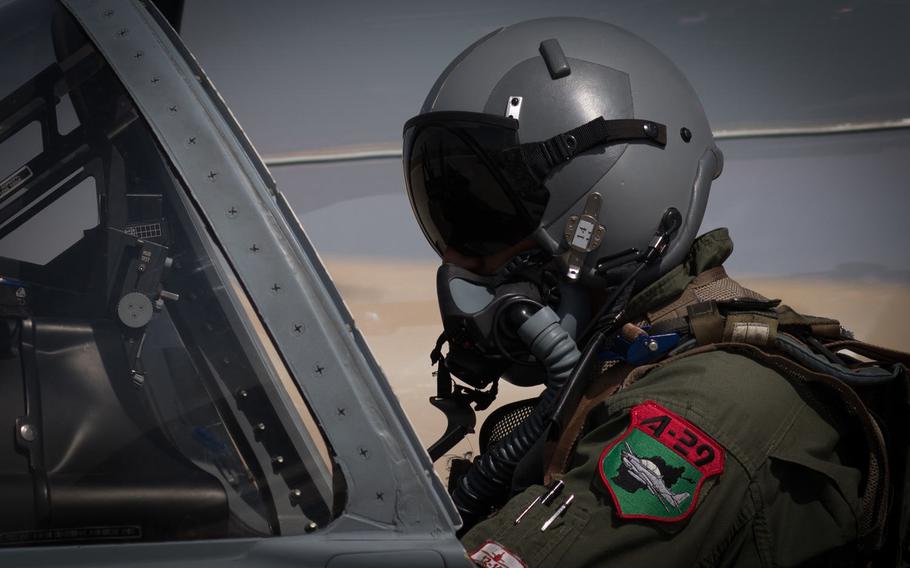 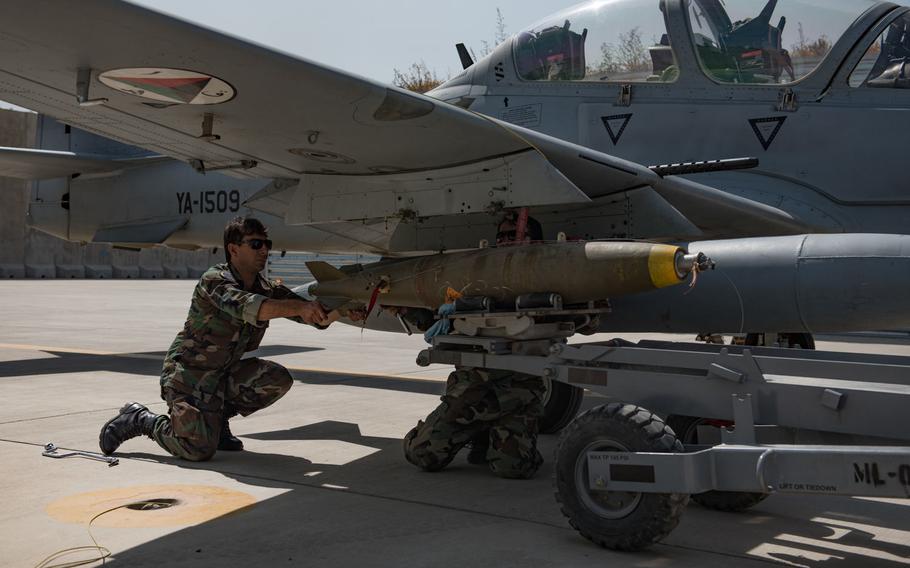 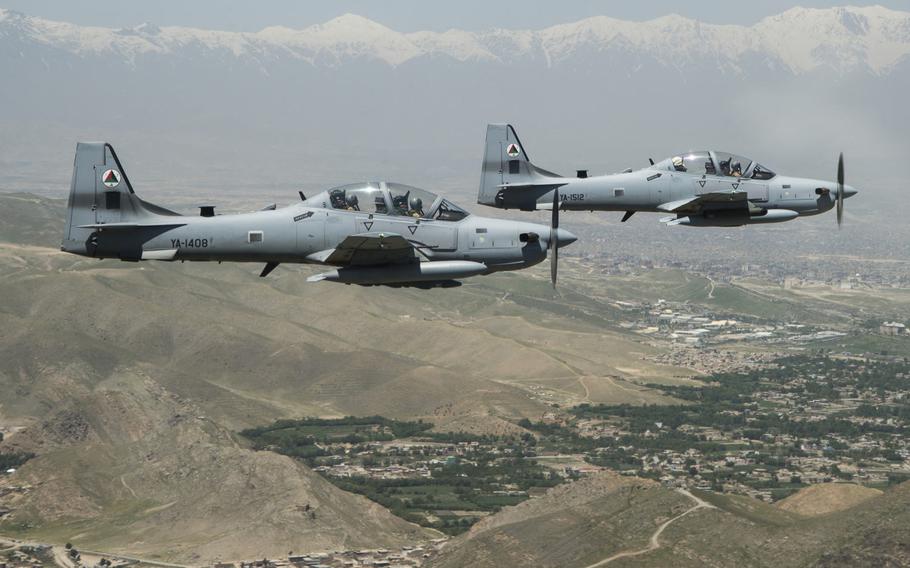 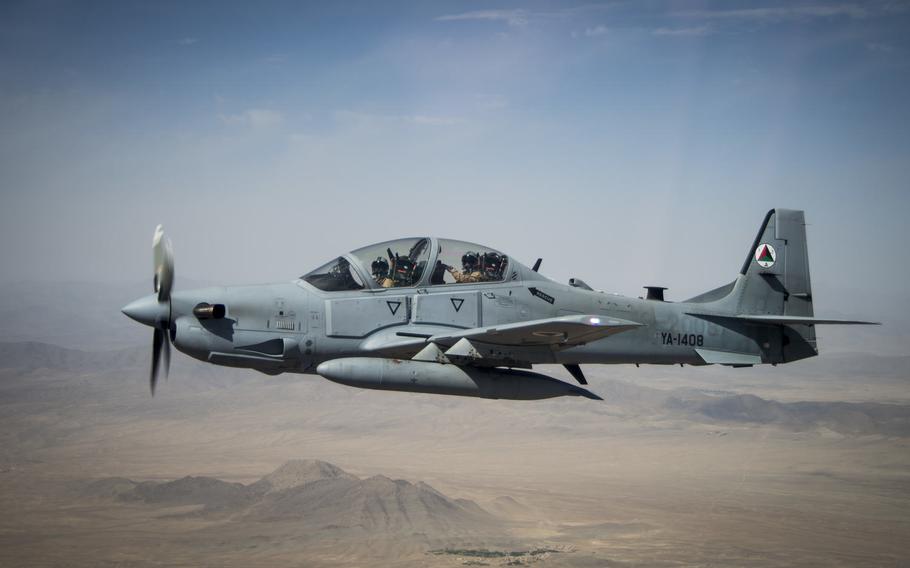 The Pentagon had originally planned to provide the Afghan air force with 20 Super Tucanos. The new order will bring the total number to 26, aircraft maker Embraer Defense & Security said in a statement on Wednesday.

U.S. military officials in Afghanistan were unable to immediately comment on why the extra planes were needed, but the order comes as U.S. and Afghan officials seek to strengthen the air force to break a battlefield stalemate with the Taliban.

The insurgents have gained considerable ground since late 2014, when international combat operations in the country ended, and more power from above is seen as a distinct advantage for Afghan forces.

The Super Tucanos are the first fixed-wing aircraft used by the Afghans for close air support, though their air force also has more than two dozen MD-530 close-air attack helicopters and several Mi-35 Krokodyl rotary-wing gunships in its inventory.

The attack planes carry a 12.7 mm machine gun under each wing and can be equipped with 20 mm cannons, air-to-ground rockets and precision-guided bombs.

Before the A-29’s arrival in early 2016, the Afghans complained of not having an aircraft capable of dropping heavy bombs on Taliban hideouts.

U.S. forces have called the Super Tucanos a “game changer” in Afghanistan — a description echoed by Afghan officials. Mohammad Radmanesh, deputy spokesman for Afghanistan’s Defense Ministry told Stars and Stripes that Afghan officials were happy to receive the new aircraft.

“We are using the A-29s almost every day,” Radmanesh said. “They’re really suitable for the geography here. You can say they were made for Afghanistan.”

Twelve Super Tucanos are currently in service with the Afghan air force. Seven others are at Moody Air Force Base in Georgia, where Afghan pilots are trained on them. Those aircraft are set to be transferred to Afghanistan in the near future. One of the Afghans’ A-29s crashed in a training exercise in March.

The U.S. is reportedly investing a total of $6.5 billion to make the Afghan air force self-sufficient. The initial U.S.-funded contract for 20 Super Tucanos was worth $427 million.