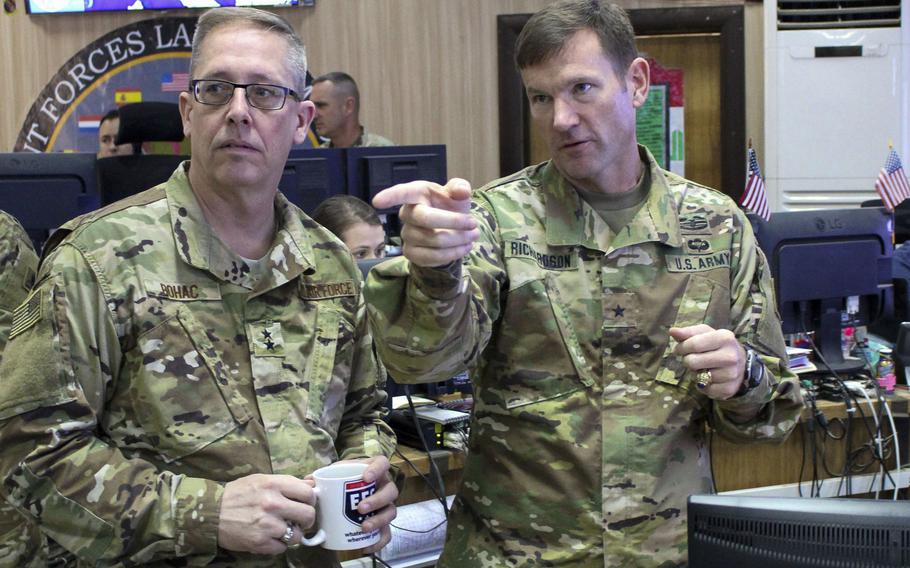 IRBIL, Iraq — The anti-Islamic State coalition faces a “more sinister” tactic than ISIS’s use of civilians as human shields in the battle for Mosul, a top U.S. official said.

Officials at a coalition “strike cell” here have witnessed many ISIS fighters pulling women and children from homes and hiding behind them to block strikes. But they now believe militants are sneaking families into homes and intentionally drawing fire on them as “human sacrifices” to stymie coalition air and artillery support.

“It’s their attempt to slow us down, restrict our fires and make it an even fight again,” said Army Brig. Gen. John B. Richardson IV, deputy commanding general of the coalition in Irbil, the Kurdish region’s capital. He is one of a few officers charged with approving coalition strikes.

It’s the latest revelation from officials scrambling to reassure the public after a March 17 incident in which hundreds of civilians were killed in an apparent U.S. strike in western Mosul.

Iraqi officials who called for the Mosul strike have said they were targeting fighters on the rooftops and claim they were unaware of civilians in the basement. They also say the area was booby-trapped with added explosives to amplify the carnage.

Local authorities have said nearly 300 civilians were killed, among the highest civilian death toll in decades. The incident, which the coalition is still investigating, has brought heightened scrutiny of the international alliance and put Pentagon officials on the defensive, as observers have raised questions about strike protocols.

In addition, reports of mass civilian casualties are politically embarrassing for Washington, coming in the wake of the Obama administration’s sharp criticism of Russia’s bombing campaign in the Syrian city of Aleppo, which ended in a government victory in December.

The number of alleged coalition strikes involving civilian deaths in Iraq and Syria has increased in recent months, according to both the coalition and outside observers.

U.S. officials acknowledge that some civilian loss of life is unavoidable in close-quarters urban combat. They have attributed the increased casualties to the quicker pace of operations in Iraq and Syria.

Officials are now also pointing to ISIS tactics to explain the matter. After visiting Iraq this week, Marine Corps Gen. James Dunford, Chairman of the Joint Chiefs of Staff, told reporters the militants are “herding civilians into buildings,” but he said Iraqi and coalition forces were adapting their tactics to avoid noncombatant casualties.

Fleeing civilians had been claiming ISIS was fighting from occupied homes and booby-trapping them with improvised explosives in late February, soon after the offensive began in western Mosul.

It’s a troubling development in a city where an estimated 600,000 civilians remain. Commanders have said the battlefield is fluid and troops face greater confusion as they fight along the cramped streets and from room to room in frail buildings there.

ISIS, which has held the city since 2014, is hardly known for humanitarianism, having built a reputation for beheadings and other brutal killings. It has long used human shields, and its fighters have been accused of targeting fleeing civilians in an effort to keep the populace in Mosul since the Iraqi-led campaign to retake it began in October.

But Richardson said the militants had until recently been clearing homes of residents before establishing defensive positions.

“To their credit, they were fighting fairly,” he said. “They made it much less complex as far as strikes.”

Then, sometime last month that changed, he said. He ties this to the group’s attempted offensive against the elite, U.S.-trained Iraqi Counter-Terrorism Service during a stretch of bad weather. They thought cloud cover would hamper the coalition and leave them to a “fair fight” they believed they could win, he said. But they miscalculated.

“For three days, they got blasted,” he said of the militants. “We were killing them in rapid fashion and we were making it an unfair fight.”

That, he believes, triggered a strategic decision to counter the coalition’s capabilities by raising the civilian death toll and blaming U.S. and Iraqi forces.

This apparent strategic shift follows the coalition’s own moves in late December to speed up the Iraqi offensive. Advisers were pushed closer to the front lines and given authority to call in air or artillery support to aid embattled Iraqi forces.

Those engagements, which “are dynamic in nature,” make up the bulk of airstrikes, Col. Joseph Scrocca, a Pentagon spokesman, told reporters last week.

Strike requests may be approved by ground commanders near the front or relayed back to strike cells like this one in Irbil, about 50 miles away, where officials work in a dimly lit room that resembles NASA’s mission control. Rows of work stations face a wall of massive display screens. Richardson and his counterparts here also approve strikes that are planned over days or weeks, using intelligence and surveillance that can look deep behind enemy lines.

Forward advisers have comparatively less “situational awareness,” given their position closer to the fight, Richardson said. Those ground commanders typically approve only strikes in their line of sight and in response to enemy contact, he said.

In either case, approvals hinge on whether the target is positively identified as a combatant and the strike is proportional, militarily necessary and minimized to avoid civilian suffering — all requirements of international law — Richardson said. Strikes must also comply with the rules of engagement, which he said are more stringent. Though the rules remain secret, one principle is that troops always have a right to collective self-defense, he said, meaning the coalition troops can defend Iraqi partners.

ISIS appears to have learned that if it openly fires on Iraqi forces, the coalition strikes back. The group also seem to know that each engagement is tracked to great accuracy, and all claims of civilian casualties will be investigated.

They are effectively turning these elements of the coalition’s system against it through propaganda.

Stars and Stripes’ Tara Copp contributed to this report.