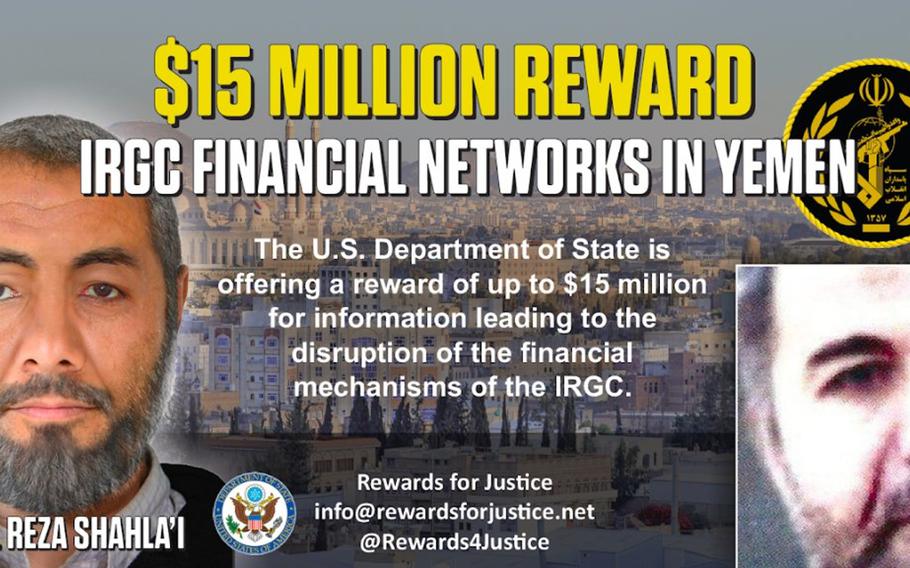 The State Department is offering a $15-million bounty on an Iranian financier and planner of attacks against the U.S. and its allies. (Rewards for Justice/Twitter)

The United States is offering a $15 million reward for information on Abdul Reza Shahlai, a top Iranian commander who allegedly planned attacks against U.S. and allied forces, including a 2007 raid in Iraq that killed five American soldiers.

“Shahlai has a long history of attacks Americans and our allies globally,” Brian Hook, special representative for Iran, said in a press briefing on Thursday.

The U.S. has twice named the man — a leader of the elite Quds Force of the Islamic Revolutionary Guards Corps — a specially designated global terrorist.

Shahlai, believed to be 62, is now based in Yemen, where he’s assisting rebels battling the U.S.-backed government and allied forces, Hook said.

“He planned multiple assassinations of coalition forces in Iraq, provided weapons and explosives to violent Shia extremist groups, and planned the Jan. 20th, 2007 attack in Karbala that killed five American soldiers and wounded three others,” he said.

The assault on the Karbala provincial headquarters by an Iran-backed militia was part of a plan to kidnap American troops and exchange them for prisoners.

Wearing U.S. military uniforms, brandishing American weapons and driving in SUVs closely resembling those used by government contractors, militants stormed onto the base shortly before sunset, taking Humvees parked at the center and aiming a .50-caliber gun at the buildings, Sean Bennett told Stars and Stripes in 2008. A sergeant first class at the time, he received a Silver Star for his life-saving actions that January day.

They sent “flaming beer cans” into the buildings, then cut electricity and began attacking on foot, Bennett said. He was shot in the arm while fending off an attack on the comms room where he and four other soldiers were holed up. One of those soldiers, Pvt. Johnathan Millican, was killed and two others were also wounded.

Shahlai was also responsible for a foiled 2011 assassination attempt on the Saudi ambassador to the U.S. in a Washington, D.C. restaurant and had “aimed to carry out follow-on attacks” that could have killed up to 200 civilians in the U.S., Hook told reporters, while announcing other steps meant to ratchet up pressure on Tehran.

The Trump administration will ask Congress to sanction Iranian officials responsible for alleged brutality toward thousands of protesters who have been imprisoned since a crackdown on anti-government protests throughout the country. The administration has been seeking to pressure Tehran into renegotiating the terms of a nuclear agreement made under the Obama administration, which Trump has said was a bad deal.

News of the latest moves in the pressure campaign came as the Defense Department pushed back on reports that it was considering sending 14,000 additional troops to the Mideast to counter Iran and its regional proxies. Officials were mulling a more modest increase of about 7,000, the Pentagon later said.

This summer, the Pentagon began sending several thousand troops to the region, along with aircraft and other equipment, as a deterrent to Iran and its proxies, citing increased threats to U.S. personnel and other interests there.

The reward being offered for Shahlai is meant to disrupt the IRGC-Quds Force’s finances and activities, including its involvement in Yemen where a civil war between Houthi rebels and the Saudi-backed government began in 2015, Hook said.

“Given Shahlai’s track record of terrorism and destabilization in Iraq, we remain gravely concerned by his presence in Yemen,” he said.