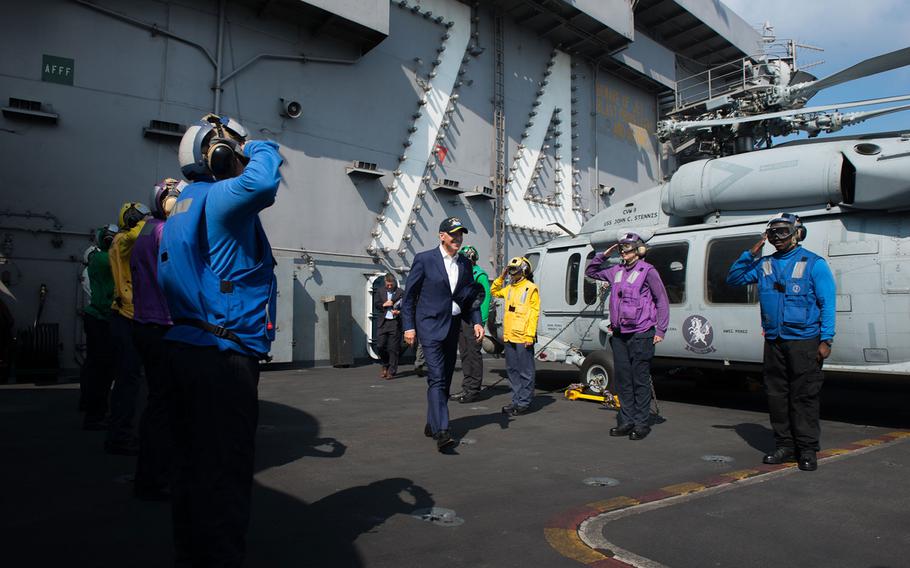 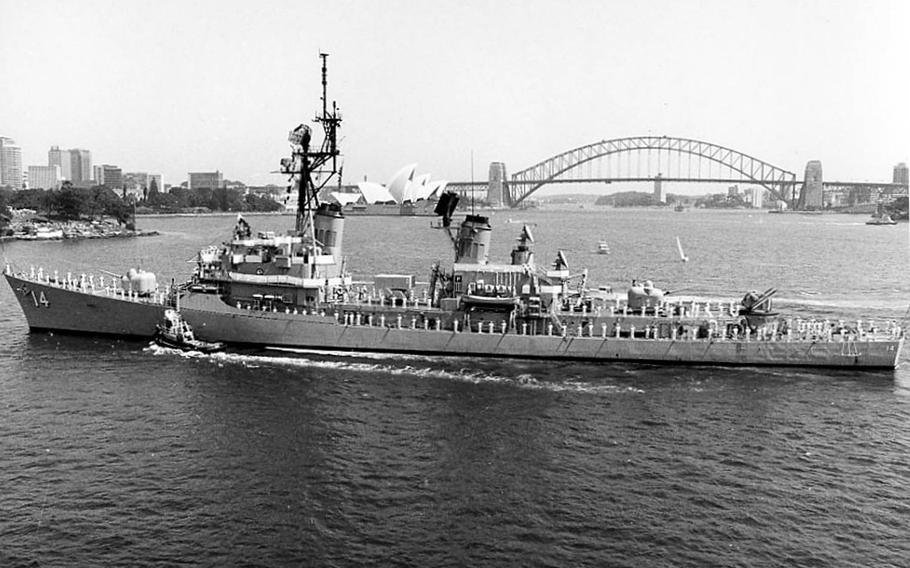 The USS Buchanan visits Sydney, Australia, in 1985. The guided-missile destroyer was refused a port-call request by New Zealand that year on grounds that the United States would neither confirm nor deny whether its vessels carried nuclear weapons. (Courtesy of the U.S. Navy)

The Navy will make a port call in New Zealand for the first time since 1985, when the South Pacific nation banned visits by ships carrying nuclear weapons.

Vice President Joe Biden announced the visit Thursday during a short stop in New Zealand, according to the New Zealand Herald newspaper. The U.S. will send a ship to help celebrate the Royal New Zealand Navy’s 75th anniversary in November, officials said.

It has not been announced which vessel will make the historic visit.

The Navy hasn’t docked in New Zealand since a left-wing government in Wellington refused a port-call request by the USS Buchanan three decades ago on grounds that the U.S. would neither confirm nor deny whether the guided-missile destroyer carried nuclear weapons.

The U.S. responded by suspending training with the Kiwis, effectively limiting ANZUS — the Australia, New Zealand, U.S. Security Treaty — to a bilateral defense pact with Australia.

The rift between the allies has been long-lasting — New Zealand was left out of a free-trade agreement between the U.S. and Australia in 2004 — but there have been signs of rapprochement in recent years.

New Zealand, part of the “Five Eyes” signals intelligence-sharing group with the U.S., Britain, Australia and Canada, hosts U.S. Air Force planes en route to Antarctica. The New Zealand Defence Force has sent troops to Afghanistan, and Kiwi soldiers are in Iraq training locals to take on the Islamic State.

The U.S. has been normalizing its defense relationship with New Zealand for some time, said Brad Glosserman of the Hawaii-based Pacific Forum think tank.

“There’s an understanding that the world has changed and we need to have a better relationships with our friends in Wellington,” he said. “Our objective is always to work more closely with like-minded countries.”

New Zealand is a key player in the South Pacific, where there are unstable governments and the potential for social unrest related to unsustainable development and climate change, Glosserman said.

China has been trying to gain influence in the region, though that threat has been overblown, he added.

David Capie, director of the Center for Strategic Studies in Wellington, said Kiwis protested U.S. port calls in the 1970s and ‘80s, when people were more concerned about nuclear weapons and nuclear power, but he doubts there would be much of that in November.

“A poll in May said 75 percent of New Zealanders supported a ship visit,” he said. “Even among people who identified with opposition parties, two-thirds were in favor.”

Interaction between the New Zealand Defence Force and U.S. military is at a level not seen since the 1980s, including a busy exercise schedule and high-level defense consultations, he said.

U.S. Marines restarted training in New Zealand after the Americans lifted a ban on joint exercises in 2010, and Kiwi ships have docked in Hawaii during recent Rim of the Pacific exercises.

The nations have many common interests, including peace and stability in the Asia-Pacific region and global security, Capie said.

“I think Washington values New Zealand’s perspective on the South Pacific and its contributions in Afghanistan and to the training mission in Iraq,” he said. “It’s also a country that supports a rules-based international order, free trade and international law.”

However, the future of the countries’ defense relationship could be affected by November’s U.S. presidential election, Capie said.

Another potential fly in the ointment is the Trans Pacific Partnership trade pact. Both U.S. candidates oppose the agreement, which is a priority for New Zealand and seen as a key sign of U.S. commitment to the region, he said.

“If that doesn’t pass, I think it will raise some big questions,” Capie said.

The 30-year stand-off was due to a conflict between New Zealand’s anti-nuclear laws and America’s policy of neither confirming or denying the presence of nuclear weapons on its ships. New Zealand Prime Minister John Key has said it’s not necessary for a nation to declare a ship nuclear free if he can ascertain that from the vessel’s specifications.